Brilliance of the Moon: Scars of Victory by Lian Hearn.

I didn't like the last part of the Tales of the Otori nearly as much as the first part. It wasn't bad, or even dissatisfying, but I don't think it was up to snuff with the rest. It too clearly read like "tying up loose ends," & things just too easily fell into place-- in large part through a huge piece of deus ex machina. For Takeo Otori's part of the story, that is fine: he's been fortune's fool from the outset, & has been living under the sword of Damocles. When you are part of a prophecy, I don't mind the god-machine intruding, because the writ of destiny acts like Chekhov's gun. Besides, Takeo has already had his moment of triumph, using the skills of his Tribe; the narrative event doesn't trump his personal victories. Kaede, that is another story. The trap she falls into is horrifying, & very scary-- but she only manages to escape it through storyteller fiat. That I think is the single greatest misstep of the whole series. Heck, Kaede as a "black widow killer" could have actually been handled well, sort of turning that trope on its head. That was my prediction, anyhow, but instead Kaede is robbed of her agency by deus ex machina, spoiling a bit the balance of the characters. The world moved toward the cusp of change over the course of this series; contact with the "barbarians"-- white quasi-Europeans-- bringing guns into the mix, social mingling between the castes bringing a sense of egalitarianism, poisoning the feudal structure. I'm curious to see with the "fourteen years later" sequel is like, but I think I'm looking forward more to the Shigeru Otori prequel; the Tales of the Otori shined the brightest when Lian Hearn's writing was constrained by the binding rules of the society she'd created. That is one of the pleasures of worldbuilding-- the web of plausibility, the strictures of fictional cultures. Like with haiku; having those strict forms causes your mind to dance at odd angles. For me, the best single part was the creepy way that the Tribe assassin in the beginning of the book died. It was very much a warlock's death, a hissing thing of hate & fear. Fantastic. Now-- on to the rest of Nausicaä of the Valley of the Wind! 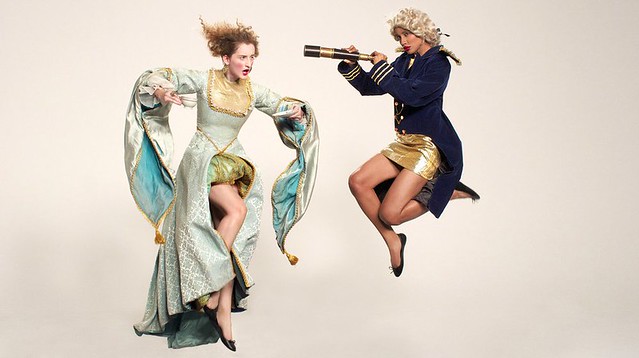 I tried to stiff-upper lip, I put on a brave face & kept muddling through, but in the cold light of day I have to admit: the first episode of America's Next Top Model: British Invasion was...not very good. Maybe more accurate to say...very not good. I really blame the editing; it was frantic, jumping from girl to girl to girl to judge to judge to shut up already! Not having a "thirty girls, eliminate half" first episode left it feeling...in media res would be a nice way to put it. Sudden, unfinished, unbegun? Listen, you don't have to try to pace this like a music video; I'm going to get seizures. Even worse: the cardinal crime! Where the hell was the fashion? Bad lipstick gimmicks? No. The clothes? Costumes. No, no again, NO. To say nothing of dressing the Native American girl up in an insulting Halloween "Indian" costume & then yelling at her for not being Pocahontas because it should be easy because they are both Native American? Oh man, what. No. All of that, no. Here is hoping it gets better? We didn't watch the second episode, on account of our DVR being infested with gremlins; instead it was an episode of The New Girl followed by the gross Storage Wars: Texas. We had, as Jake Blues would put it; gotten the band back together: Me, Jenny,

fatbutts & James. Beers of the evening were Southern Tier 2X Stout, a nice milk stout with a kick & Tommyknocker Pick Axe IPA, a dry IPA that was pretty smooth, too. Archie barfed on the rug, that happened, & David & Maggie & I played a little GoldenEye while we were waiting for everybody else to show up, & that is about all that happened, I think? Though I'm probably leaving something interesting out, who knows. Do I have a favorite girl? No, not yet; the Scottish girl, Ashley? I want her to remind me of Amy Pond from Doctor Who, if that keeps up I'll root for her. From the "Yanks," AzMarie I suppose? Pending any possible psychotic episodes or being charmed, or in other words, pending actually watching the rest of the cycle.

Nausicaä of the Valley of the Wind, IV by Hayao Miyazaki.

Swift comes the angel!
Blue-clad in the god-bug's blood,
her gun shoots whistles.

The daikasho is coming, brought by the hubris of the men from the cold-tombs, the cryogenic crypts of Dorok. Oh man, Nausicaä of the Valley of the Wind is so good! At this point, the story has moved onto the greater world map, as Princess Kushana's corrupt brothers' Tolmekian army clashes with the Dorokian military under the command of the Holy Emperor's brother. Or rather, that was last volume, & this deals with the fallout-- the literal fallout, actually, from the Doroks' use of biological weapons. The bugs are rushing south, the Dorok's have seized the doomsday device God Warrior, & then just when things seemed awful...the slime-mold that the Doroks had been using as a poison & scorched earth tactic...mutates into some vast collectivist organism. It...isn't good news for anyone. Miyazaki humanizes all of his characters, from the most condemned villains to the most enlightened heroes, & that characterization sticks around after the viewpoint of the story moves on. & then sometimes the story catches up with the characters from earlier: Mito from the Valley of the Wind, Lord Yupa, Asbel the Pejite, Kecha the Dorokian, Selm of the Forest People...they are all there, & when they aren't, they are off pursuing their own agendas, as the story is a vast organic web of connections, slowly building to a head. It is really fantastic. I know I'm not really saying anything of real critical value, I'm just sort of bubbling with enthusiasm. 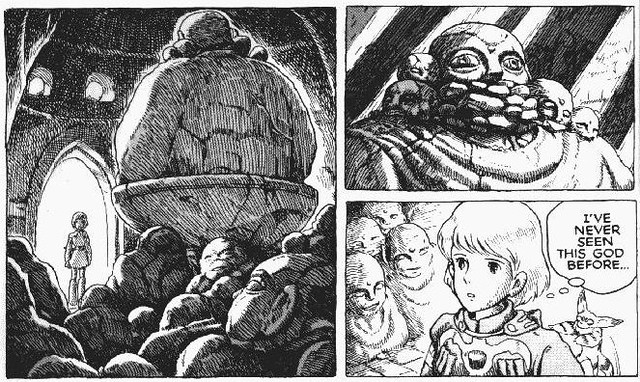