Grass for His Pillow: Lord Fukiwara's Treasures by Lian Hearn.

Further Tales of the Otori, continuing to hold up strong. The first two volumes make up the first "book," & they don't have a satisfying conclusion, in that sort of bittersweet fashion some stories have. You know, The Doctor & Rose are separated forever, or Romeo & Juliet die, or Nicole Kidman in Moulin Rouge! If I had any complaints about Across the Nightingale Floor it was that it focused on Takeo's story, while Kaede is the more interesting, to me. Takeo is the male lead, & he's just got too much stuff going on; the convoluted secrets of his parents, the secret "Jewish" upbringing with the Hidden, heir to the Otori clan by adoption, debt to the Tribe "ninjas"...it works, because his role is to be enmeshed in a web of responsibilities & duties, tugged in every which direction, but Kaede is more subtle & thus more nuanced. The story of her beauty reminds me of Fire, in that it is as much a curse as anything; her part of the story is a meditation on the danger of being a woman in difficult times-- which, while I'm thinking of parallels, has a lot in common with some of George R. R. Martin's writing. Lian Hearn-- Gillian Rubinstein-- is however a woman, which necessarily informs her gender portrayals in vastly different ways from the characters in A Song of Ice & Fire, & for the better. Grass for His Pillow involves Kaede coming into her own, starting to consolidate her own power base, & yeah! I'm definitely into that. 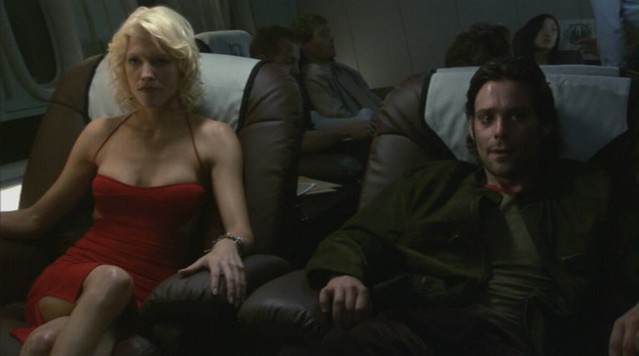 Television Night last night! Beers in the belly were both Flying Dog; Flying Dog Raging Bitch Belgian-Style IPA & Flying Dog Snake Dog IPA. Of the two, Raging Bitch is the better, but both are pretty great IPAs...Raging Bitch is just an IPA that Jenny can enjoy, which I think speaks volumes. Not that dear sweet precious Jenny was here for Television Night; she had a work event to be the queen of, so it was us without her. I picked up some decent cheap Chinese food & then before you know it,

fatbutts in tow! David had said he would get here early, & I told Lilly to come early to match him, & they ended up synchronized. Nice! The three of us argued about the internet for a while, till James arrived. We patiently waited for him to finish his food, or enough of it to capture his attention, & then you know what that means! Battlestar Galactica! Oh man, now the show is in full swing; I think the jump from mini-series to television episodes really benefited the show. We start with "33," which for my money is the best of the show's episodes just for how perfectly it encapsulates the premise of the early seasons. You've got Head Six & Baltar in top form, you've got the cylons using psychological torture, you've got the life & death choices with the Olympic carrier, space battles, interpersonal relationships, cylon infiltrator suspicions & dramatic irony...yep, that is what Battlestar Galactica is about. "Water," the next episode, continues it, but brings the arc down to a personal level, focusing on Boomer's struggle with herself & Chief's love for her. Like I said to the people watching it last night: if you think I wouldn't help cover up for Jenny if she was a cylon, you're kidding yourself. Cylon Jenny is fine with me. Speaking of, Jenny came home & I thought she'd want to hang out, but she didn't at all! I predicted her behavior incorrectly, so I had to kick everyone out. Bye! See you later! You don't have to go home but you can't stay here!

Okay, now I suddenly have a rather crazy idea for dealing with armor & equipment-- overhaul the whole Initiative system! It is a bit pie in the sky, but I thought of it so I wanted to sort of run through the thought experiment. Currently, the Initiative system is Dexterity plus Composure plus a d10. Perfectly serviceable, but then I thought-- hey, you know what Initiative system I really liked? Shadowrun Second Edition. That system was a static number derived from the average of a couple of attributes, usually one to six, plus a d6. Cybernetics & magic could crank that up to double digits plus 4d6 at the upper limits. You'd roll & you would act on every multiple of ten. That is, if you got a 7, you'd act on 7. If you got a 17, you'd act on 17, & then again on 7. If you got a 27, you'd act on 27, 17, & 7...which means that if the person you were fighting got a 13, you'd go twice before them. & so on. Now, this has a very key factor in making reaction a critical part of the game, because in any system the ability to act more than once is the most fundamentally unbalancing ability. Even healing magic-- my personal pet peeve-- is a distant second. So, I realize that this is a huge concern, but I'm just sort of winging it here. See, I think the burden of carrying stuff is...well, a huge pain in the neck. Wearing a chainmail shirt just...sucks. Heck, carrying a sword strapped to your waist is clumsy & annoying. A lot of Encumbrance rules try to make out like the matter is weight, but it isn't, is it? It is mass, & how it hands, & just dragging sort of discomfort, mostly. It is itches you can't reach & shoulders hurting from straps & not being able to stop fidgeting. That is why I am increasingly inclined towards Willpower penalties-- but enough about that. Now I'm thinking...initiative penalties? Armor & weapons giving initiative penalties provides a useful difference between unarmored & armored, between a short sword & a nodachi. Of course-- devil's advocate-- the argument could be made that since Oubliette doesn't have hit points, just winning Initiative is a big enough deal, without overhauling everything from scratch I've had thoughts along those lines before, like giving smaller weapons initiative bonuses & longer ones penalties.
Collapse