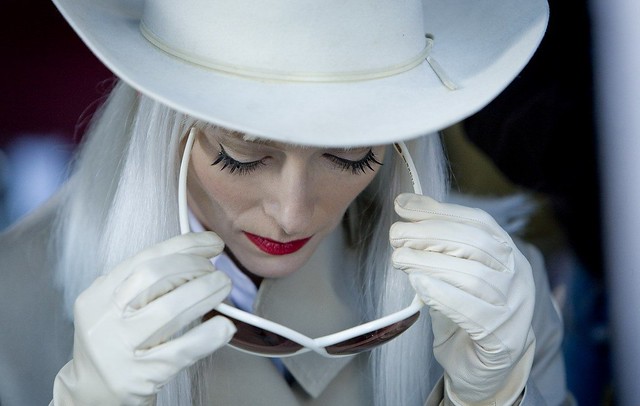 Erf. All I've done is...well, I've done stuff, haven't I? I figure I did. Jenny's been sick so a lot of it as been taking care of her. & quite a bit of afterwork drinks with co-workers. Oh, the one at Dewey's? I gave the place a bad review on Yelp, because it was a bad bar, & the owner responded to my bad review with personal attacks! Which is kind of a triumph, since I guess it validates everything I was saying as immutably true. Sorry, chum! The other night's drinks were for a going away-- & I ate terribly that day! Dumplings for lunch with Pamela, then pizza, then a burrito & then lastly some hotwings? What the deuce? I did manage to get to the gym on Friday despite everything, & to get to the gym on Saturday as well-- well done, sir. I've now moved up in the gym politics world again! Past fist bumps & into "getting a hard time." You know, I go to leave & someone is like "what, leaving so soon? After just an hour & twenty minutes?" A playful ribbing! I reply all indignant, aghast, well I never. David came over on Saturday to make Jenny soup, which ended up being a lovely rabbit stew. Other than that, lots of television. Tilda Swinton was on The Daily Show, & was lovely & alien. What! She said she had "two children. The same age." Tilda Swinton! Earthlings call those twins! It was a gloriously strange interview, in which she urged everyone to move to Scotland & live among the trees. Also, per New Gingrich's statements on colonizing the moon, they 'shopped Georges Méliès "Man in the Moon" with his head & I, for whatever reason, found it riotously funny. Oh, there was the Thursday night line-up, which we watched as it aired-- again, plague-ridden Jenny-- which had Tina Fey dressed up as Liz Lemon dressed up as a Princess Jedi, which was pretty aces. Also Parks & Recreation had a satisfying punch out. We watched John Mulaney: New in Town, which was worth a bunch of chuckles-- Jenny & I have always liked him, I guess because of some VH1 talking head show? Once I saw him in the subway-- before he was remotely famous-- & I pointed at him with "gun fingers" & said "Hey! Funny man!" & then otherwise, Jenny started a new BBC show that is precisely the sort I like-- one where I can pay attention when it suits me & ignore it when I don't feel like watching anything. Doc Martin, & it is sort of a House medical drama, sort of a Gilmore Girls weird town politics, but really neither quite hits the mark. It is one of those "possibly autistic jerk" fish-out-of-water stories, & it has a weird charm to it. It is very British. 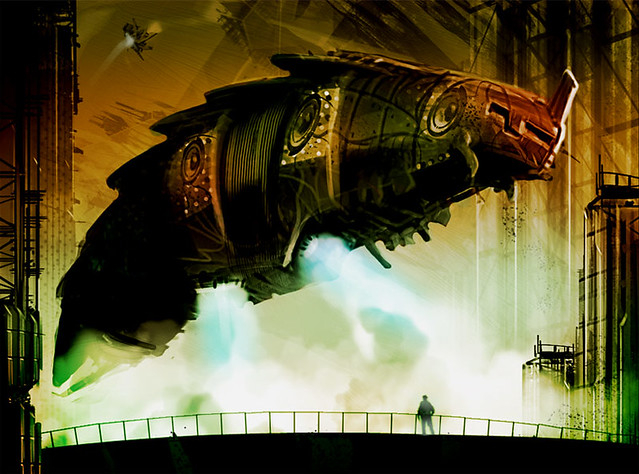 (The Heavier-Than-Air Vessel "The Bumblebee"; Art by Dave Holland.) 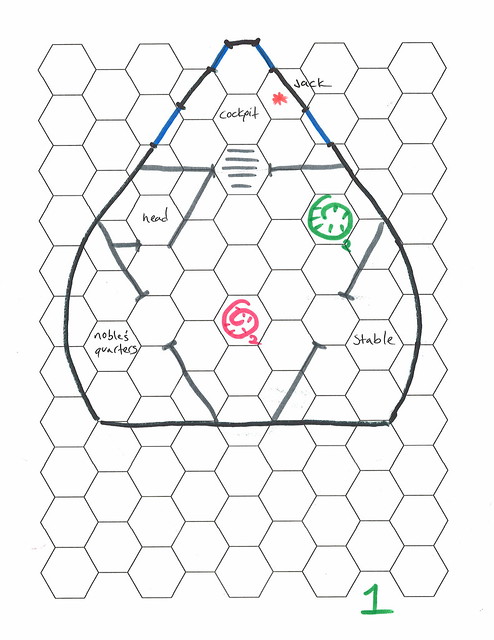 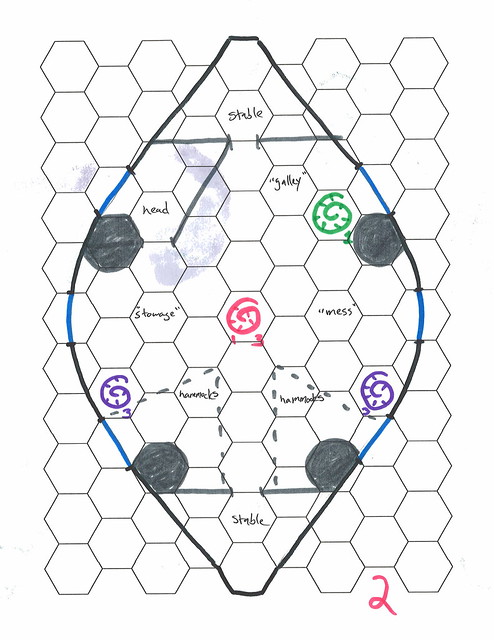 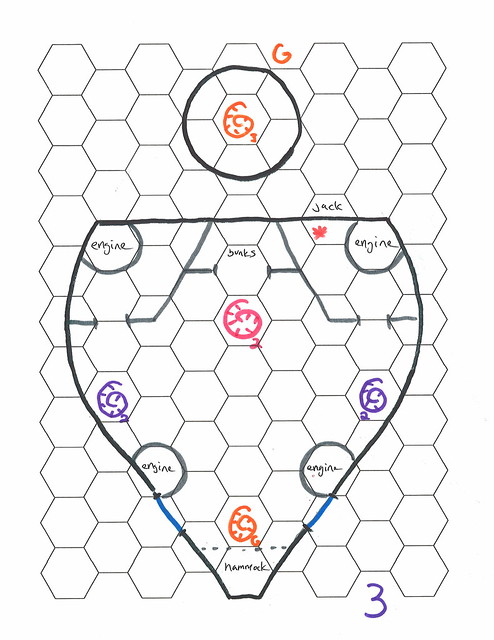 I made these hexmaps for the airship in my Oubliette campaign & was charmed by how old school they turned out. The hexes were a bit smaller than I wanted, which I didn't realize till we actually hit the table, but that was no big deal; just made things a little more cramped than I intended, which actually worked out, because it made James say it was "like a submarine" which was the atmosphere I was shooting for. The top is the cockpit, leveraged somewhat downwards, & the quarters for the ship's noble patron & their mount. In this case, that would presumably be Duke Slumberheart, but he ended up sleeping in a hammock in the stables with Rosewater, following the lead of Blue Glory & Herakles Nightmare. Curie slept in the engine room one night but felt guilty & slept with his new mount Fenrir Stormstruck. Chaplin Rush, their pilot, slept in the bunks in the engine room. The roof of the top has plates that can bristle open like scales, & the bottom-most part (marked "G") is the anabaric cannon ("G" for "gun"). Mostly the design is modular, with kitchen elements, tables, hammocks, stowage, all being easy to snap on & snap off. When I brought out the maps I said "I have this weird fussy fear that I'll just end up ruining these with spilled water or coffee" & lo & behold, as soon as I set them down one soaked up a wine ring. S'okay, as mentioned, Leonardo da Vinci's stuff is all covered in wine stains, & I'm exactly like Leo. Almost exactly the same. Katanas & everything. After all, I'm sketching notes & designs about a flying machine, & I'm a frickin' genius. So basically twinsies.

I've never been a fan of boxed sets. I know that some people like them-- "oh, maps!" they say, I imagine-- but I like books. Durable books, for my gaming-- hardcover over paperback, please. That being said, The Book of Vile Darkness isn't in a format I particularly like; a softcover, a thick pamphlet, & a map, all in a slipcase. Is this what Dungeons & Dragons books are going to be like? The future of Fifth Edition? I hope not. This is just personal preference; I suppose someone might find the binding...no, you know what? I don't think so. There is a "Dungeon Master's Book" & a "Player's Book," but what? No, I don't agree that having the division is needed. I understand wanting to keep secrets from the Players-- though I don't think there are particularly good ones in here-- but I don't think it is a reasonable solution. People buy a book; sometimes those people are Players, sometimes they are Dungeon Masters, & sometimes they do both. What, are people supposed to buy this book...as a couple? I don't get it. Let's put that aside; I don't like the format, that is the first impression I get from the book, & there you have it. Actually, my second impression, since my first impression is "woah, this Wayne Reynolds cover is sweet." The Worm the Walks! All disgusting as heck, with his diabolical tome-- presumably the eponymous Book of Vile Darkness.

Here is the thing; I know I have exaggerated expectations. The Third Edition Book of Vile Darkness by Monte Cook is like, my favorite third edition sourcebook-- okay, after Unearthed Arcana-- so the new Book had a tough row to hoe. The Book of Exalted Deeds, the Third Edition "good" counterpart to The Book of Vile Darkness, is something I'll curse up & down. "Benevolent" poisons? How about being good means not poisoning people? Cribbing the same mechanics as Corrupt Spells (the same system the D20 Call of Cthulhu used for magic, by the way) as like, some sort of sacred stigmata? Lazy! Add on top of that a bunch of over powered classes & feats & ptew. I spit on your grave! The Fourth Edition Book of Vile Darkness isn't that bad. Sadly...well, like a lot of Fourth Edition products, it is all chock full of crunch, of mechanics & rules, & I just...don't care? I mean, they aren't of so much use to me-- any use at all, since I use the Storyteller System for Oubliette-- but I can still appreciate cleverness. Far more ruinous is all the...philosophy? Listen, I don't need pages on what evil means, nor do I need pages on theoretical ways to integrate vile villains into my game. I would more rather...well, I would rather the book followed the writer's adage: show, don't tell. The old Book of Vile Darkness is slithering with Demon Princes & Arch-Devils, you know? Throbbing & thrumming with the (heavy metal version of) evil. It has feats to give permanent wounds-- Vile Damage is probably my favorite side-mechanic of the Third Edition. The Fourth Edition version...has some traps? Some templates for monsters that...let them do more damage? I dunno, I just don't feel it, you know?

It isn't bad! In fact, some of it is quite good; the magical artifact of the Book of Vile Darkness is great. Backstory on that-- so yes, the title of this book is "The Book of Vile Darkness," but in the universe of Dungeons & Dragons, "The Book of Vile Darkness" is also a magical tome, a relic of evil written by the evil magician turned undead lich turned demigod turned god of secrets Vecna. Fourth Edition did magic items the opposite of good, if you want my opinion-- stripping the weird & interesting bonuses in favor of...well, dealing more damage, & making the math of the game require & assume you have them. Yawn. The one thing Fourth Edition did knock out of the park was artifacts-- the ur-items, the relics of legend & lore-- & that system works great for the "Book of Vile Darkness" as an item. I want to put it in a game along side the Hand of Vecna & the Eye of Vecna! & Themes-- I always like themes, even in Heroes of the Feywild. Some are obvious, like Cultist or Vile Scholar, but some are great, like Disgraced Noble...man, Disgraced Noble, I saw that & was so happy. Still, nothing here makes me go-- "oh dang, dang that is really mean, doing that to a Player...yikes...hahah!" & that is bad, because that is what should be happening. I should be cackling with glee, or at least flinching away. Instead...nah. Nothing.
Collapse