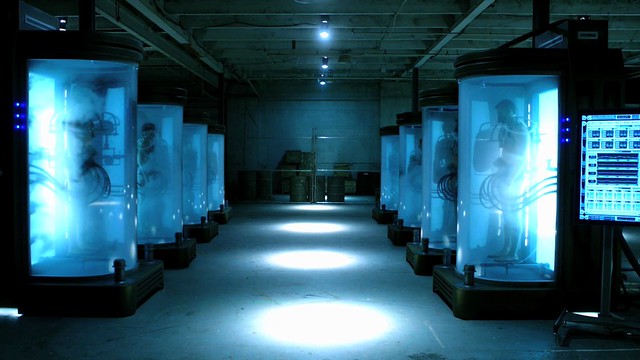 Oh, & before it slips away, the weekend! Friday I went to an art show, & then Terra & I went to Angie's Going Away Party. Remember at the work party where I met the "German foreign exchange student?" That was Angie, sent over from our German parent company just to sort of see how the American's make the sausage. Anyhow, that was nice-- it was at Rodeo & we sort of ended up pinned at the bar, but there was a surprise visit from Vanessa & Aubrey, & Terra ate one million peanut & scatted their hulls like spent brass cartridges on a battlefield. After that, I swung by Kat's apartment to hang out with her, Matt & Jocelyn & Brian. I don't think they expected me to come, but I carefully guard my "maybe" answers! I am a bit of a flake in that trying to actually get me to commit to a schedule is a pain in the neck, but at least I'm not the kind of flake who says "yes" when they mean "no." I say no most of the time, but my yeses mean yes & my maybe means it could actually happen! Anyhow, I got drunk & ended up hanging out on the fire escape evangelizing for Sleep No More. Saturday I went to the gym-- keeping up with my three days a week-- & I was there for an hour & a half, though I think it was a fairly timid work-out. Or anyways, it was heavy on cardiovascular & I didn't push myself on any free weights or do too intense of a circuit on the weight machines. Then we had the book club meeting in the evening, which went well.

All of which led into Sunday...where I did nothing. Nada. Zilch. Oh, I guess I made breakfast & some snacks-- I have been good about cooking breakfast & have prepared lunch for Jenny & me lately on the weekends, too. Other than that...I played a little bit of Animal Crossing: City Folk, as did my wife. She even had a friend over to visit, from another town! I beat the heck out of some casual flash game, Mega Miner. Then, as the night wore on, people started yelling. Oh, there must be football, I guess. On one hand, I have an amount of local pride, I am glad a Metropolis team is doing well in the sportsman contest...but I sure hate the people in my building who root for them. They just turn the building into a college dorm, full of screeching & yodeling. I'm not not talking about excitement during a clinch play, I am talking about aggravating racket, constantly. I was annoyed, so Jenny & I split a bottle of wine & watched Fringe. "Back to Where You've Never Been" & "Enemy of my Enemy," bringing us up to date with the show. No more backlog of episodes, sadly. Nice to have Jared Harris back chewing scenery as a super-villain. I think the show is missing a great opportunity with Peter-- they should be using this as a chance for competence porn, for Peter to be able to use the knowledge learned in his timeline to just be a creepy wizard in this one. There is a bit of that where he's talking about cutting a guy in half with the portal; more of that, please! Oh & while we are at it; I still say Earth-3, full of evil versions of the characters. & you know how there is Fauxlivia & Walternate? Evil Peter's nickname can be "Repete!" Oh, fine, well, I thought it was funny before bed last night.
Collapse