A fun couple of dreams, very much Big Trouble in Little China mixed up with Grimm's. The first discreet moment I can remember, when dreams crystalized from an ocean of unattached images into an iceberg of narrative-- there's more going on underneath in the subconscious than you can see on the surface, ne?-- was watching a bunch of monks with halberds. You know, one of those shaolin halberds that have all the different prongs going out, the crescent moon sickles, the kris blade-- these were lightning monks worshiping something more strange than Thor, Indra, Susano-o or Zeus. The polearms were the personification of the bolt; they were on very long shafts & the monks did all sorts of acrobatics & flourishes with them, dozens of them in a dance-skirmish. So I of course stole one. We were on the hunt & I needed a weapon! I ended up unscrewing the blade from the staff, tucking it into my belt-- a source of stress, hiding it there without being stabbed-- & used the shaft as a quarterstaff, as a walking stick. That was what the characters all did in on of my campaigns. I was at some sort of Pan-Asian flea market, browsing around, but looking for something-- some ritual, some monster, some relic, I don't know what. There were other people in the market looking for the same thing, & looking for me-- rivals, minions, enemies, a whole plethora. A young woman grabbed me & pulled me aside from the bazaar-- I thought I was going to have to fight her, & fumbled like an idiot at my belt, but instead she gave me a knife. Not an ancient knife, but a slick, modern minimalist fighting knife. Something that would actually be useful in a fight. I tied it to my leg in a sling like Han Solo's blaster holster & tried to play it cool.

There was a part with a car. Oh, the mad man or the possessed monster or the evil genius or whatever-- I remember now! We were in the future, & the stores were practicing with biometrics for theft prevention. The store had a machine that would monitor you, based on a datastick on your keychain; you had to leave your keys at the door. The enemy-- a guy halfway between Clancy Brown & Doc Brown-- had somehow taken control of the machine & overloaded it, so that he could use your body's signature to kill you instantly. He did it to someone to make a point-- & again-- one he exploded in a riot of meat & blood & the other he just stopped, just turned off. It was a weird hostage situation. His wife was there-- half hostage, half accomplice, who could say? I told the guy that I hadn't left my keys; that my roomate & I had switched keys since I had to borrow his car, & since my roomate was out of range, there was nothing he could do to me. & I beat him to death with the fire extinguisher before he could test my statement. Or well, I hit him in the head with it, & a bunch of teenagers who had been trapped ran in & started kicking him & punching him, too. I told the wife she had to come with me, & I got the keys I was using & we went out to the car. She said it was fast thinking, bluffing him like that; I said I never bluffed. But I had bluffed, I'd lied for the split second of advantage.

The headquarters that I worked out of-- as a sort of monstrumologist, a troubleshooter, a dabbler in the occult, whatever-- was a Chinatown herbalist. I don't know why my dream was so Asian in set & scene; even the guy's wife was an Asian woman. Oh, probably because of the Mongolian art show! The herbalist wasn't some Eighties movie cliche, he wasn't some magical orientalist caricature with a mogwai hiding behind the counter. He was a homeopath, an acupuncturist! I knew that I'd met him in an earlier "case," & he had a reoccurring problem that was easy enough to deal with, but he'd arranged payment for ongoing services by leasing me space rent free. Like, I had to periodically refresh the poltergeist wards or something. There was also a man who sold potions, snake oil-- he'd been an earlier client & the contact with the supernatural had destroyed his life. He'd had nowhere to go so the acupuncturist let him start selling his potions out of the shop & they'd done so well that the two had gotten into a partnership. Which was good, because there was a third guy, now-- some petty businessman from the previously mentioned Asian swap meet, someone who had had their livelihood & relationships ruined by casual contact with me on the job. Some sort of John Constantine casualty. I convinced the herbalist to take him on to run the books; he was an accountant, & I figured that having a club of people who'd made loose contact with the otherworldly could make a good sort of Scoobies gang. 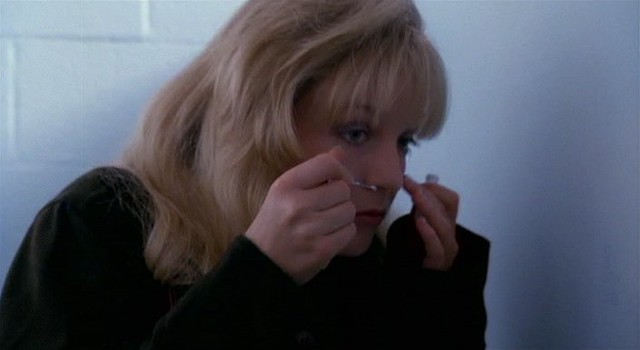 So yesterday was the second Eleven-Books Club meeting, for the book David picked, Novel with Cocaine, also known as The Cocain Romance. It snowed & slushed, & I think that contributed to a significantly lower attendance...though actually doing a headcount, there was only one less person than last time. This crew was me, Jenny, David, Terra,

ranai, Carmen & another Jenny. I think that because a lot of these people are in my apartment fairly frequently, it seemed like less than last time, where there were people who'd never been over. There was a bunch of wine-- white & red-- & David got a bunch of groceries, all the important food groups. Chips, dips, cheeses, yogurts, fruits. We actually started up recapping the first club meeting because more than half of them hadn't made it to it but had actually bothered to read The Big Year anyhow. Both remind me of Trainspotting-- Novel with Cocaine because of the obvious drug connection, & The Big Year because of the actual hobby of trainspotting being similar to birding. Carmen was last to arrive & when she did we started in on the book in earnest. Scoreboard: Danielle hated it, I disliked it, Carmen disliked it but liked certain lines, Terra, David & other Jenny fell somewhere in the middle & my Jenny liked it. I mean-- for me, I still liked the part where Vadim & Sonya meet, & I like the meta-text payoff of "Burkewitz refuses." Other it quotable, which is fine-- there are certainly bits of it that were well written & well translated. Everyone bonded over not knowing what "rodomontade" meant, even though we are all word nerds. We closed up talking about future books, rules of thumb for selections, unrepresented genres, diversity of authors & protagonists, that sort of thing. Oh! & in the middle of everything a bookshelf broke, started leaning over, so we had to do emergency triage, clear everything off it, tighten the nuts & bolts, & put everything back on it. Stressful!
Collapse