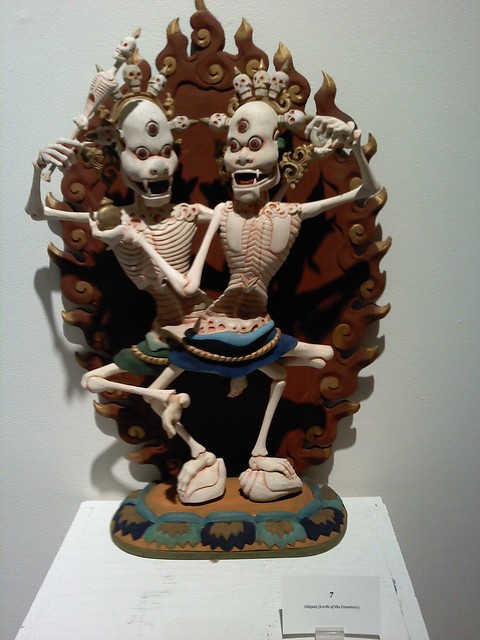 For lunch today, Terra & I went to the Tibet House to see the art exhibit "Mongol Visions: Winged Horses & Shamanic Skies". Much better than the sort of boring "Otherworldliness" show we went to last week. I liked "Tselmuunee" by Nurmaa Tuvdendorj quite a bit. The symbology in Soyolmaa Davaakhuu's works reminded me of Owl Cave in Twin Peaks. Uranberkh Magsarmaa "River Balj" piece was really fantastic, too-- sort of had a cave painting look to it as well, come to think of it. Not to sound condescending about it; just that there was a very old school feel, a studied attempt to evoke the distant past. Bulgantuya Dechindorj-- I'm sorry, but I just...can't stop thinking about Star Wars: Episode One when I look at your work. I know, I know, George Lucas appropriated your cultures fashions, your well goes to a deeper source. I just bring my preconceptions with me, sadly. Far & away, Gankhuyang Natsag's work was my favorite; masks & sculptures that really just dazzle. The physicality, the reality of the pieces-- they aren't just meant to be left on a shelf, they are meant to be used, to be costumes, to be pieces of culture. I was really excited about them. 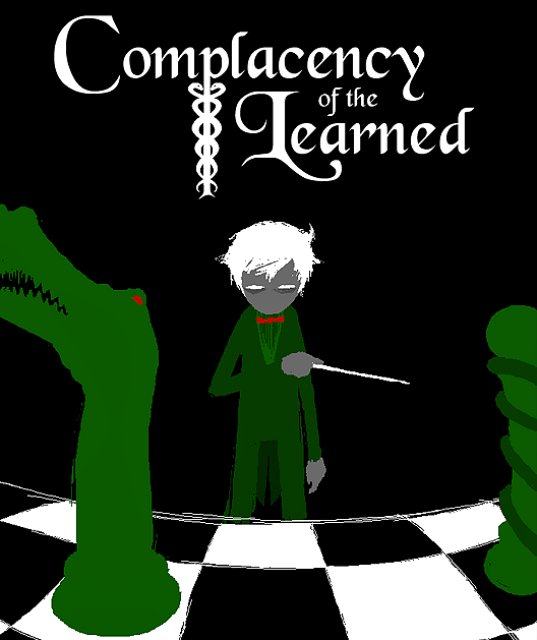 So lately I've been grappling with the question of cost, of resource management. Questions like whether I need a new Attribute for Potency, or a new pool for Character Traits. That might all be some fairly advanced stuff, with a narrow window of interest; I want to talk about the philosophy of game design, but I end up talking about my Oubliette campaign, particularly. To sort of break out of that mold, I have had a particular nagging thought that I figured I'd ruminate on. It isn't actually any more accessible-- in practice, I think of it in World of Darkness terms-- but you could carry through the logic to other systems. I'll try to keep my notions generic, or at least to toss out parallels when things start getting a little big too specific.

This sort of goes along with the idea of Marks that I mentioned previously; long term consequences for contact with the supernatural. Or the paranormal, even, if we go with my proposed nomenclature. What I have been thinking about is-- levying serious costs against Players. Vampire: the Requiem has the most notable one-- it costs a dot of Willpower to make another vampire. Not a point-- a chunk of the attribute. In in Dungeons & Dragons terms, that is like permanent attribute drain. Or is it? You can buy it back with Experience-- eight points, which is a little less than three adventures worth-- so it is more like Magic Item creation, or spells with Experience Points cost, isn't it? Which is a shame-- I've never liked "Experience Damage" as a magic system, though I will admit that it might keep wizards rare at the table. What about actual Attribute Damage, though?

I just keep thinking about possibilities, & fiction where those have played out. Permanent damage to Health-- or a permanent lower of Hit Points-- to reflect the rot of the Emperor in Star Wars? With corresponding benefits; guy can see the future & shoot lightning. A permanent loss of Humanity? Well, first Humanity would have to have some in-game value for that to really be compelling, but the struggle with hubris & inhumanity is fine & dandy. Permanent looses of Willpower are fine-- I tested it on Balthazar in my last campaign-- until you start coupling it with using Willpower as your main resource pool. Then it gets wonky...though half-crazed paranormal powerhouses can lend a cool Akira vibe. The more I think about it, though...it gets wonky. Maybe an easier way of approaching this is to consider reverse Experience? That is, tempting a place with lichdom, slowly selling off their Health dots for Experience points to buy powers? A good road to the Dark Side, maybe? Temptation!
Collapse