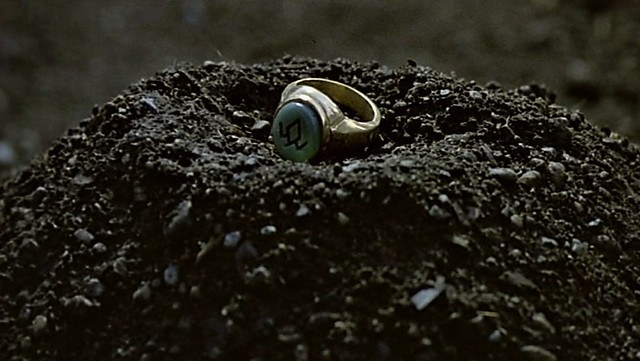 Spoilers.
I don't know that I've ever fully articulated my theory about the ending of Twin Peaks. It is always interesting to map disconnected works: I've often said that the second season of Twin Peaks is required as exegesis on the first season, but the film, being a thing apart, shows the elements that stick across media. On to the theory! In a nutshell: I agree with the theories involving time travel. Not in any way as bald or crude as most time travel stories, but I think the evidence is overwhelming in that regard. An old Dale Cooper in the first dream. The backwards talking-- though that is also just a great short-hand for The Uncanny. The scene with Agent Cooper & the cup of coffee-- solid, then coffee, then tar, all while the Man from Another Place rubs his hands, implying agency. Then, ultimately, in Fire Walk With Me, Annie being with Laura Palmer, Laura dreaming about Agent Cooper telling her not to take the ring, & the final scene with Laura, The Blue Angel & Dale Cooper. A certain sense of non-sequential temporal shenanigans is at work, clearly. So, that is the first component of my theory. The second piece is the Blue Angel.

She makes me think of a couple of things-- was Lynch working out some serious religious issues, or something? More importantly, isn't this clearly an inhabitant of the White Lodge? I mean-- I'm personally a proponent of the view of angels as monstrous, as wheels of light & snakes with wings & many faces, of flaming swords, pillars of salt & of babies strangled in cradles. Supernatural forces that have to start their conversations with "fear not," lest certain poor shepherds loose their marbles entirely. That is beside the point-- we see the angel in Fire Walk With Me as a spiritual intercessor, as a cinematic shorthand for a being of pure good, videlicet the White Lodge. Point three-- well, we all know the Good Dale is trapped in the Lodge, & the Doppelganger gets out. Now, watching the finale, we see Cooper run from the Scary Laura & run from his own double. I would say that counts as failure, as imperfect courage-- not confronting the Girl You Couldn't Save & not confronting Your Own Dark Side is totally a loss to the Dweller on the Threshold. That being said...well, Fire Walk With Me supports a reading of the film where Dale Cooper chooses to remain in the Lodge, in order to use elements from the White Lodge to go back in time to save Laura Palmer's soul. He clearly acts as an intercessor in the final scene, as a bridge. So yes. I think Special Agent Dale Cooper found an Angel & traveled back in time to save Laura Palmer's soul.
End Spoilers. 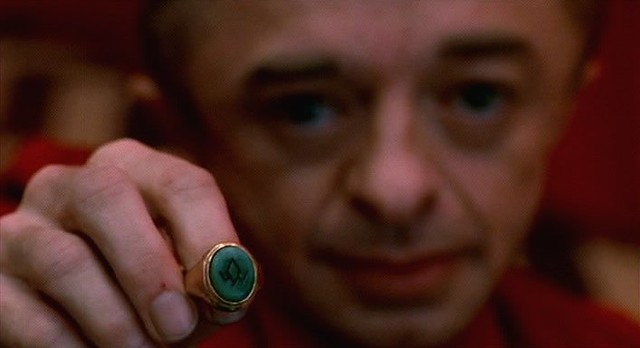 So that was a thign that happened; Terra came over & watched Twin Peaks: Fire Walk With Me, finishing up our viewing of what is undoubtably my favorite television series of all time with one of my top five movies. Also, last week we went to an art show called "Otherworldliness" at the Michael Rosenfeld Gallery. It was...actually pretty boring, I don't know what to tell you. Still, being in the habit of going to art exhibits on our lunch break is a good one. Oh & Jenny & I went to the Zlatne Uste Golden Festival last Friday, but I was tired & crabby & we didn't stay very late. Still! It was in the Grand Prospect Hall! Which is exactly like you'd imagine it is from the commercials. Pretty great. I don't know what else has been happening. A little bit of this, a little bit of that. I watched an episode of The New Girl & found myself laughing. I would really like to like Zooey Deschanel. I really liked her in Elf, I just sort of...blaming her public relations team? She's been marketed as twee & indie, & the problem is...she's actually twee & indie, & so it just ends up doubled up & saccharine. I mean, when she was on that Elvis Costello show, Spectacle? & she was so nervous about singing with Jenny Lewis? That was endearing; you don't have to work so hard to make her endearing, marketing team! That just makes me hate her a little.

GREETINGS, STARFIGHTER.
YOU HAVE BEEN RECRUITED
BY THE STAR LEAGUE
TO DEFEND THE FRONTIER
AGAINST XUR & THE KO-DAN ARMADA. 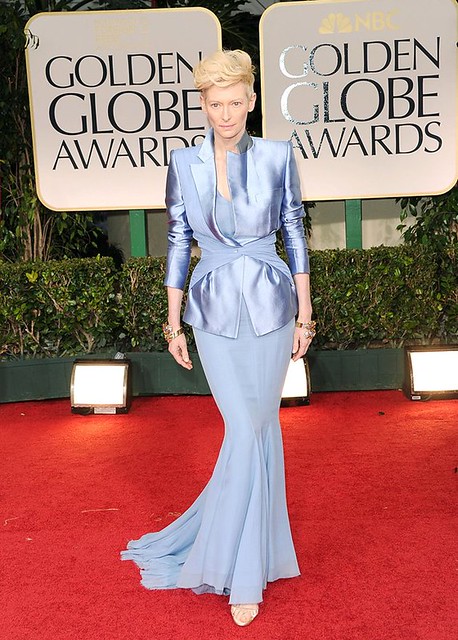 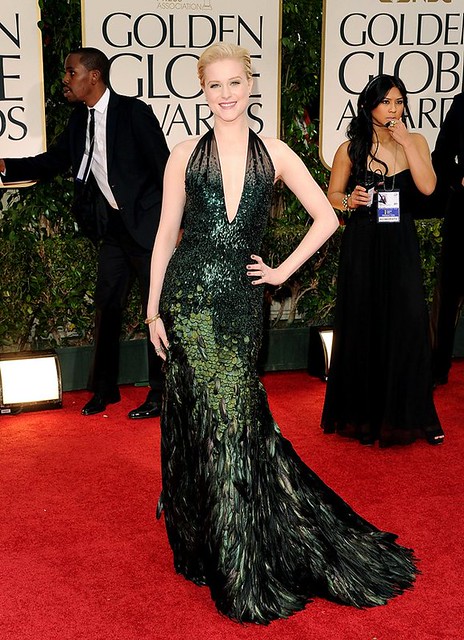 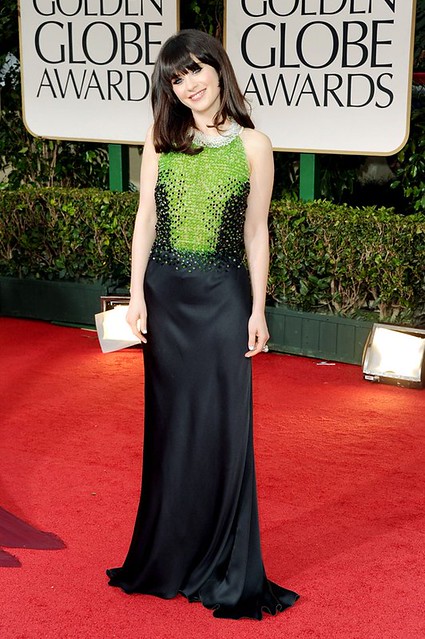 Pros: I really like that almost sea foam green & the cut of that Prada.
Cons: I want to like Zoey Deschanel but I can't quite. 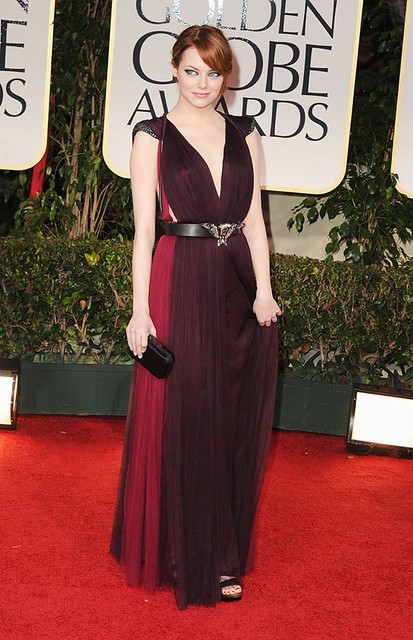 Pros: Emma Stone is basically fantastic, & her eyes are like "woah, damn."
Cons: That Lanvin dress is fine, but really, Emma Stone could be wearing any C+ dress.

We are in a fellowship, we gamers, that share lots of overlapping mythologies. Personal mythologies, historical mythologies, religious mythologies, cultural mythologies. Monsters provide an interesting entry point to those; they are a window into the inner workings of the hobby, they are a barometer of how things stand. Pathfinder has always kicked ass in that arena-- remember all the Classics Revisited series?-- & this book isn't an exception. Reading it on the train last night, there were moments where I literally pumped my fist in the air out of excitement. Some of that exuberance you can chalk up to the martinis Pierce fed me, but the rest is pure teratology. On a side tangent-- one thing Dungeons & Dragons Fourth Edition did well was monsters. Having a number of powers for each critter makes them far more engaging than just a mess of hit points. Bestiary Three has learned that lesson well; you don't see a lot of stat blocks unadorned with bells & whistles. Special powers make monsters cool, in a way that having a high AC or doing lots of damage doesn't. Oh & the art? I can't see its praises enough. Take a look at the cover-- an undead knight, a cyclops & a bunch of kappa? Awesome. So awesome. Well done, Mister Reynolds.

Bestiary Three draws from a wealth of sources, & not all of them are the typical sort that you'd expect. Take the asuras & the rakshasas-- gosh, I wish I'd had these back in the last Third Edition campaign I was in, Mike's Oisos game. I played a Zoroastrian inspired astral deva, & these would have sure come in hand. I gotta tell you, I'd much rather see a maharaja rakshasa or a asurendra asura than a pit fiend or balor-- they have oodles more character than some generic hulking demon. Same thing goes for the Miyazaki-like kami & the oni; I really like seeing non-Western cosmologies well supported. Having kappa, baku, tanuki (minus any anatomical...er...emphasis), jurogumo & a shinigami (with face-meltingly good art) is fun, but the spiritual angle is more essential. It could support a non-Western setting. & when I say non-Western, I mean non-European...if you were running a game with elements of the Weird West in it, there is stuff for you, too! The Pale Stranger, &...a cannon golem?! Oh hell yeah...& then the next entry after "golem, cannon" is a fossil golem with Tyrannosaurus rex skulls for hands! That is what I'm talking about.

The first few monsters in the book aren't that great-- animals with shark fins, & such fodder-- but as soon as you get to the archons, it gets banging. An angel that is just an...orrery? & I was just talking about how I like my angels to be creatures of blood & iron & fire. There is the thalassic behemoth, which is just Moby Dick with lobster claws. A vulnudaemon looks like a creepy little Samara with a slit throat...& the bleeding gash has teeth! What. The contract devil is the above mentioned stereotypical diabolic figure...with really long horns all over his body, draped with Faustian paperwork. Pathfinder does good with fiends. Another pool, another legendarium that we gamers share is...well, the game itself. Some of these things can be...silly, but Paizo has done a good turn & made them a little less goofy. Two of the redeemed misfits are here: the flumph & the wolf-in-sheep's-clothing. If you want to get a little more Bas-Lag in flavor, there is the octo-merman caecalia & the garuda. & the lunar naga, for that matter-- it doesn't have a Bas-Lag connection but it sure seems like China Miéville could have invented it.

An unofficial tradition in gaming has been to take individual monsters from myth & make them into an entire species. Thus you get plurals of formerly proper nouns, like "medusas" & "hydras." Bestiary Three give a clever turn to this in a few entries, most notably norns-- they'll cut your thread!-- & humbabas. I really like Humbaba, & after rereading Gilgamesh I have thought about Humbaba's "aura" a lot-- & making it a Prismatic Aura is a wonderful touch. On a related note, I like having a section for sphinxes-- my biggest phobia, actually-- but I with the shedu & the lammasu were in that section. Come on, they are basically the same thing. My brain's fear center says so, anyhow. & the book finishes up strong. Bee people-- I remember rubbing my gums with bee people honey in

kingtycoon's game! Hektonchire! Oh, my favorite! & the jotund troll! Like a perfect little hektonchire sidekick, monstrously wrong in head-count & proportions. Of course there is a penanggalen, of course there is. Porcupines & pukwudgies make me think of Teenage Mutant Ninja Turtles & Other Strangeness, in a good way. In the best way. As if there was a bad way to think of the Teenage Mutant Ninja Turtles. There is the obligatory Lovecraftian horror, the Great Race of Yith. Plenty of Lewis Carrol references, too, from toothsome bandersnatches to scaly jubjub birds. & of course, tzitzimitl, portrayed here as fifty foot tall Aztec robot skeletons that travel through space to "shut down worlds," & crackle with kirby dots & negative energy. They shoot lasers from their eyes & can cause an eclipse. 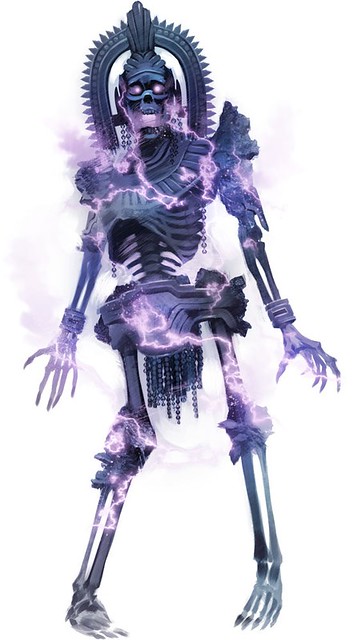