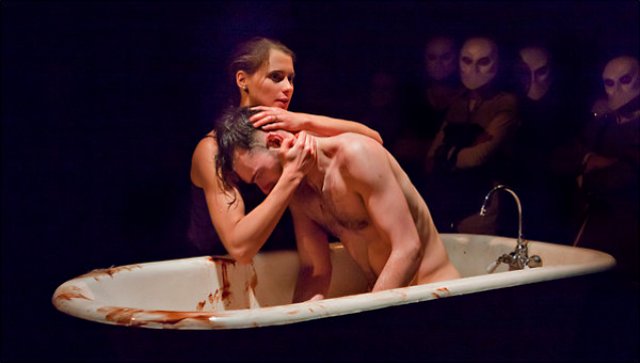 Had a Sleep No More dream last night, after invoking the memories of all my usual little dream beasties & besties. Or rather, a Punchdrunk dream, since the context of the dream was that there was a new immersive show. I think the only part of my dream that ties in to my own personal mythology was when the militant Harlequin came out of the red drapes to give me a glass of chartreuse, which I promptly drank & used as a crutch to explain why the rest of the events were so fragmented. You met at a bar on the docks; the ocean lapping at the wooden prominence jutting out over it as martinis were served. That location was stable, the sort of quasi-Manderly, because I ended up there when I was accidentally ejected. The actual show started with a great deal of menace. You are drinking terrible alcohol with teenagers in a storage locker, or garage. It is filled with broken lawnmower equipment, blades ready, tools & sharp edges. They blindfold you, & lead you through the labyrinth of sharp metal objects, Wire Mother's garden-- maybe I was wrong, maybe the Frequency was on-- & they take the false wall away & you are inside. The space is fluid; a huge underground water reservoir, emptied & filled with Twin Peaks-esque red curtains. The curtains are heavy enough to be a barrier to passage & more to the point, they move, connected to motors far above. The maze is ever shifting. Outside of the first "room" I start in, I hear dozens of horses riding past; outside, a science-fiction Ceasar rides in a parade, back from the war. There are girls all in green dresses, nymphs flittering about, kallisti apple tossing like, even. There are mythologies at war under the red tent, I think, but I am drunk. I loose my way, end up outside, but an usher finds me sitting at the bar, harried-- "they're looking for you inside, sir! You're on!" 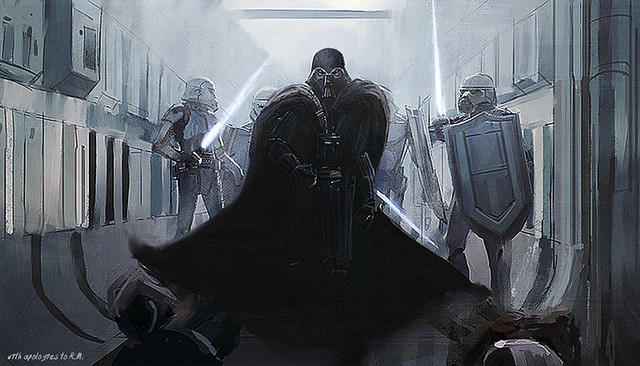 Okay, time to keep thinking about armor. The core of the problem is that the regular World of Darkness is a modern day setting; the game is built around the assumption that people will be shooting guns at you, with maybe a little anachronistic swordplay here & there. Since Oubliette is a Weird Fantasy campaign, that entails certain tropes, pulling from both the Fantasy & the Science Fiction genres. You know, chainmail & mecha. I have to put some thought into making it work. In the last campaign it was fine; Sam's character just wore a chain shirt & that was that. I still like having the default as no armor; I'm only obsessing over the issue because I want to find an elegant solution. Well, that, & because in the current campaign Sam's character has an exoskeleton & Radarless' character was kitted out in ō-yoroi lamellar armour, which makes it manifestly relevant. So yeah, I've been stewing over it. Kicking the tin can around, not to be overly intending with my puns. Just sort of brainstorming.

First thing first: doing anything other than having Armor increase Defense is silly. Clearly it should provide a Defense bonus; that is the obvious, minimalist, elegant method. Anything else over complicates it. Which brings me to the drawbacks of armor. I still admit that I have a fondness for having Armor just penalize Willpower; I think that the biggest problem with armor is a sort of constant discomfort, an awkwardness & unwieldiness that fatigues & frustrates you. Thus: Willpower. I think that might not be as intuitive to some people though so I'm not married to the idea. The other notion I've been kicking around is Encumbrance. I've never really liked Encumbrance rules; I think they generally fail, being reduced to bean counting or abstracted to a point where you can ignore them. Best case scenario, I think, is when people either carry everything in a backpack & drop it (as a free action) at the start of combat (as my Characters have been wont to do) or to have Characters who get a wagon & just carry all their stuff in there (as my current batch of Players tend to do). Both of those are fine measures, but don't address the core of the issue.

I've got a notion for Encumbrance I've been mulling over, based on the World of Darkness damage system, of all things. See, I like their damage track system: Size (five, for humanoids), plus your Stamina. Fill in the bubbles-- on a scaled from six to ten-- & then the boxes below it are your health track. Penalties accumulate as it fills. Easy. I've always been bothered at encumbrance systems for not taking things besides weight into account; I mean, there are a reason that short swords are popular in history, & that reason is "because people keep tripping over these stupid long swords." I just think-- well, as far as abstractions go, giving things a "Encumbrance Rating" & filling that in on a short bar with hash marks is a pretty easy way to go that might actually accomplish that. Now, alright-- some people will argue that no encumbrance system is good, because the very act itself is just micromanagement. Maybe! I just think it might encourage people to kit out their characters responsibly. It isn't really a problem I've encountered with Oubliette, but considering that the first campaign had James' character Garrick as a dreadnought of black iron, & the current game has Sam as a cyborg in power armor, that having a solid system in place might be a good idea.
Collapse