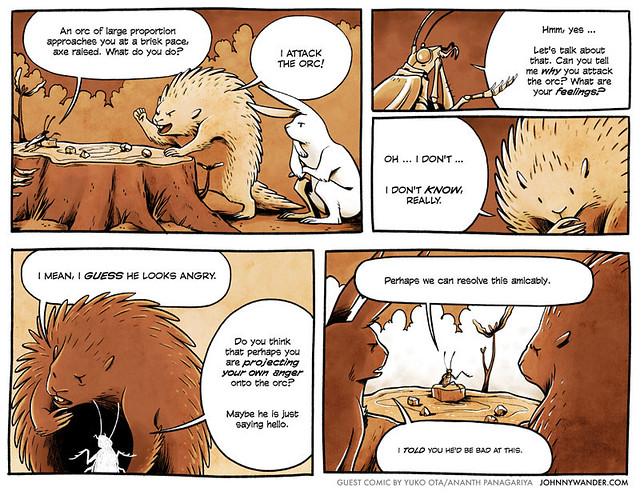 I mentioned my various noodlings about Character Traits in a discussion about the new Dungeons & Dragons edition, &

kromelizard said that because I talk about it in such World of Darkness terminology, he never really followed what I was on about. I wanted to take that to heart & revisit the topic, discuss it from a new angle, because the idea itself isn't one that I feel is wedded to any specific rule set. I may use the World of Darkness mechanics for Oubliette, but the notion of Traits is a matter of design philosophy; it is an idea at a higher level than any specific number crunching. It was Mouse Guard-- & thus, I assume, Burning Wheel-- that gave me the idea, though the World of Darkness' Virtues & Vices as well as Flaws come at it from a similar direction, & Mirrors goes so far as to propose a system for them, though I'm not happy with those actual mechanics.

The idea, at its root-- lets see if I can articulate it-- is to have a list of key terms that define a character, in a way that allows for both positive & negative ramifications. The Player would (largely) be left to invoke both the beneficial & the harmful consequences of these traits. In order to incentivize this, dramatic turns for the worse would be rewarded, giving Players a reason to put their Characters in jeopardy & push for less-then-optimal situations. Conflict being the root of narrative & all that. That is the basic proposal. Traits that are generic or specific could work, because either degree of narrowness would be reflected in opportunities to invoke the trait. Traits that are overly advantageous would be more difficult to reap the mechanical benefits of Players choosing unpleasant outcomes. Sort of self-balancing, by nature.

Mechanically, it would have to be specific to the system. At the most basic level-- at least, the most basic I can think of-- it would just be a one to one parity. Like a card; you flip it when the good angle is used, flip it back when the negative comes up. Would work fine, but I don't know if "equal parts good & bad" is necessary, either. A more reasonable approach is one of resource management. A pool of points; spend one to invoke the beneficial aspect, get a point back when you screw your Character over with the flip-side. That is where I'm at, really. Which brings us back to Virtues & Vices, & Attributes like Willpower. Should there be a second pool, or should I just make it another facet of Willpower? That is a question I still haven't answered. I talk about the idea of a second resource axis sometimes; this would be a potential candidate.

How to interface this mechanical innovation with Merits becomes a thing. I mean, one of the appealing angles is that you might use your Traits to sort of sideways invoke things that currently are covered by a range of Merits. You know, use your Trait to get the Narrator to create an on the spot ruling for an improvised action. The idea being-- less rules, more freedom. Some Merits-- like what would have been "Backgrounds" in the old World of Darkness would be unchanged. & to play devil's advocate...I like the fact that Fighting Styles (for instance) bring ad hoc rules to the table, for those characters who want to have a more complicated play experience. I really like the funky statistical abnormalities like 9-again, rerolling successes, rerolling failures, adding a second Attribute...I thing there might be room to split Merits into Traits & Tricks, you know?
Collapse