Glimpses of the Unknown by White Wolf.

I ordered this for a couple of reasons-- well, two big ones, really. First, I've been interested in the Unknown as a hallmark of separating The Supernatural & the Paranormal-- that is, having rules & logic define vampires may make them Paranormal, but the things without rules & logic are Supernatural-- or at least, when you don't know them. The other reason I got this was because the back jacket copy mentions Mirrors, which is the best sourcebook for the New World of Darkness hands down. I was hoping it would be something like Mythologies was for Vampire, but if it as more like Infinite Macabre, that would be aces as well. Unfortunately, it isn't really either; instead, it is a collection of hooks, of story seeds & sample plot lines, which isn't something I really needed. I realize that since I rum my Oubliette campaign on the World of Darkness, but without using any of their worldbuilding, that I'm not their target customer, but I was hoping this would scratch an itch, & it didn't. On the plus side-- this is the first of their "print on demand" titles I've ordered, & I'm satisfied with that process; well, the book doesn't have its title on the spine, & there are "notes" pages in the back as filler, neither of which is my favorite, but at least I was able to get it, & the binding quality is decent. Thanks, Lightning Source!

The book is divided into sections, by game line. The first section is just for straight-up mortal games in the World of Darkness. Some of the plots here are banal, but "She Lives" is a good one, as is the idea of a "bottle game" in a prison. The rules crunch here is miscellaneous paranormal phenomenon. The Vampire: the Requiem section is pretty hit or miss-- lots of the ideas are really obvious, but "Stolen Time" is an interesting way of playing on the fog of memory & "Lucky 13" manages to make an energy drink ominous & interesting. The Supernatural Lore Merit is useless, though. The Werewolf: the Forsaken chapter has "Earworm," which is the only decent story seed, though "The Gardener" might be a good fit in another campaign. The Mage: the Awakening has a hook for dragons, but other than that, you can skip it. The advice is basically "run a Mage campaign!" Promethean: the Created would actually be a good fit for The Gardener mentioned earlier. Still, I'm not impressed with these hooks, either-- they are all pretty much something I'd expect any Storyteller to be able to come up with on their own. Seriously, a spooky cat? That gets half a page? The use of foreshadowing & metanarrative in "Backwards from Redemption" is decent, though. The sample Athanor, though? Seems overpowered. Changeling: the Lost shares the same problems-- a lot of these ideas aren't particularly...unknown? They just seem like...ideas, & not even particularly inventive ones.

It is sort of a problem through the book in general. Hunger: the Vigil is already build with a generic template for monsters, meaning that all the monsters are original & unknown by default...which undercuts a lot of the sample ideas here. Heck, one of the plots is just "why don't you look at the Slasher book!" Oh...okay? I like that book, but that isn't a very good...pitch for a story? The problem continues with the section for Geist: the Sin-Eaters...all the sample hooks & brainstorming is basically "oh, man, how about you have those guys mess around with ghosts?" I know man, that is what those guys are up to. They are the ghost-dudes. That isn't a "glimpse of the unknown," that is a glimpse of the totally known. In fact, the core premise of that game. I don't even. However! All that changes when you get to the bit of the book about Innocents. First off, kudos for giving that book more attention-- "playing as kids in the World of Darkness" is a great idea on its own. Then having a list of field trips that could go wrong? Useful! Having a bit about a kid whose reflection's eyes seem terrified? Okay, yikes, shivers. & then "Kids' Jail," is just a home run; that is a great mini-campaign idea. There is a final section on plot seeds for Mirrors-- the sample settings (or "shards") presented in that book. Some of them are fine; again, dragons are cool, & "reality bleed" is neat. Doing a Fringe sort of "realities collide" story could work. Then again, the reluctant messiah notion of "The Unlikely Savior" & the last bastion pitch of "The Light at the End of Days" are another page of text that I don't think anyone who would run a post-apocalyptic campaign would need suggested to them. 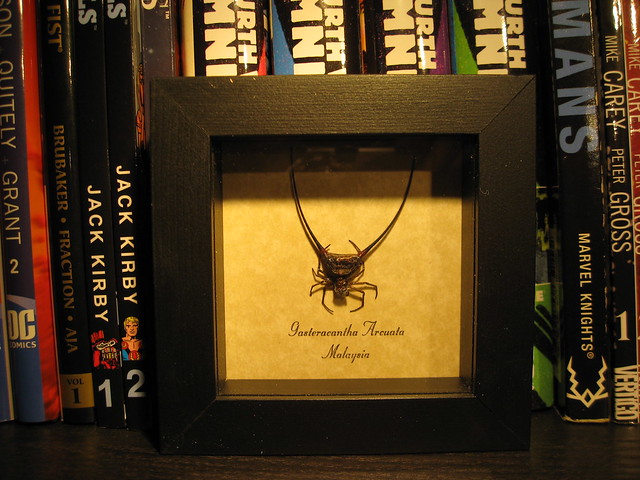 That is the spider with a spiked butt that Terra gave me before of Twin Peaks Marathon for my Xmas gift. Okay, so what did I do yesterday. Well, I had lunch with

porphyre & her friend, which was nice. I was sort of out of it, because I'd just gotten back into the swing of things at work & was hip deep in it. Super interesting! Lets have lunch, I'll blather on about my job! Ugh. Not that I'm usually all that interesting. Then I went home, saw Jenny for about a minute-- hi dear!-- & went to the gym. I'm back up to curling with the eighty pound bar; I always slip back down to seventy pounds but I'd like to think over-all it is an upward trajectory. The New Years tourists are at the gym now but it wasn't disgustingly crazy. After my workout I ate dinner with Jenny-- she'd made quinoa with chicken & spinach & carrots cooked in coconut oil-- & played a little Animal Crossing: City Folk. Or wait, that was before the gym, but whatever, I got a fossil! Then I got a drink with Gerd! Good old Gerd, he was in my first Oubliette campaign playing a seriously diabolical witch. We caught up on life, the universe & everything, but before too long I had to run back home & go to sleep. & sleep I did! I had a Star Wars dream where one of the characters had an orange lightsaber & I remember thinking "well, I guess orange is canon now. Mostly red, green & blue but sometimes purple or orange, I guess." Then today, Terra & I got lunch & went to The Container Store to pick up a bunch of stuff Jenny ordered for our bathroom!
Collapse