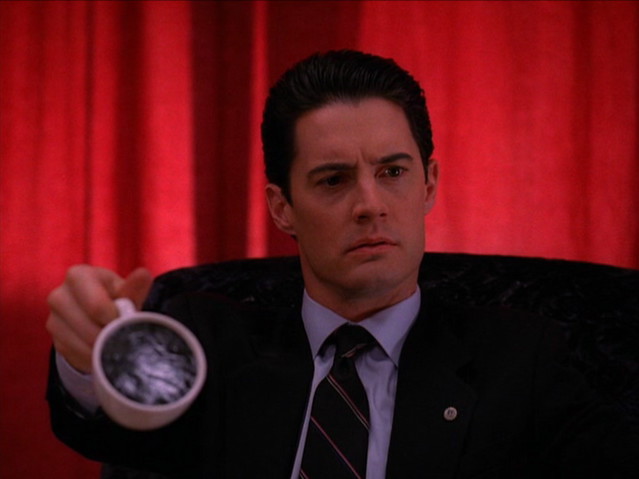 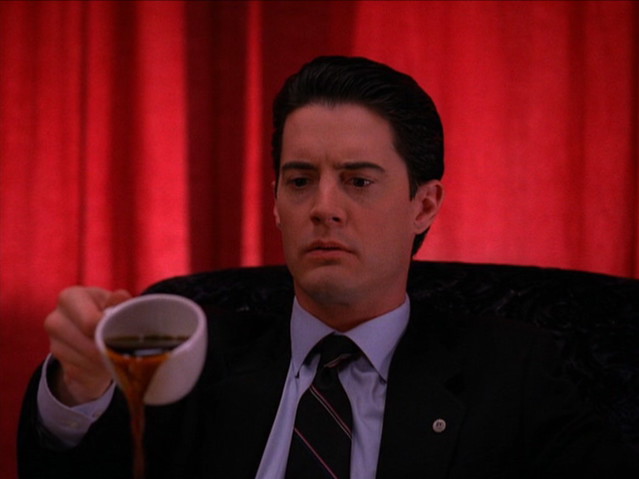 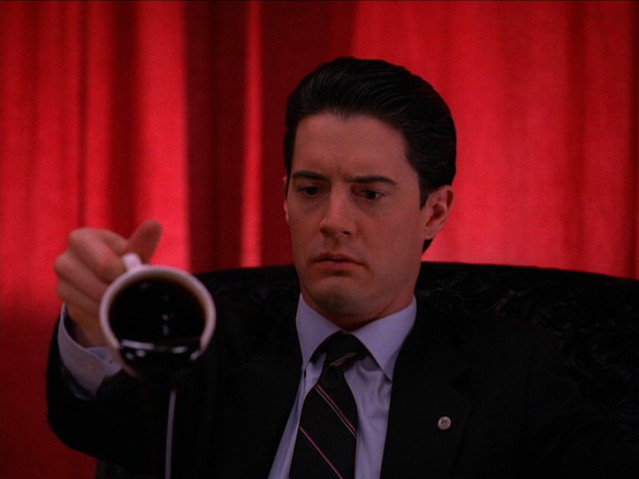 Yesterday Terra came over & we finished up Twin Peaks! Jenny & I spent the morning fooling around on Animal Crossing: City Folk-- we live in the same town!-- & then when Terra got here we ordered some Thai food from the new place, Sai Thai. Jenny's green curry was super spicy, but my red curry was just right! Jenny graciously hid in the bedroom sewing while Terra & I claimed the living room for our marathon session-- six episodes isn't quite the same thing as doing it all in one go, the way Erica & I used to watch it in college, but it ain't shabby, either. "Wounds & Scars," "On the Wings of Love," Variations of Relations," "The Path to the Black Lodge," "Miss Twin Peaks," & "Beyond Life & Death." I had my vengeance! When we first started watching the show, whenever Audrey would walk on screen I'd sort of sigh, & whenever Major Briggs would come on I'd pump my fists, but now it is Terra's turn to be all a-flutter at Agent Dale Cooper & John Justice Wheeler. We got some power lines-- Q: "What is your greatest fear?" A: "That love is not enough." "Fellas, coincidence & fate figure largely in our lives." & so forth. I couldn't stop talking about how, if I had even a shred of artistic skill, I'd draw a Tarot deck with Dale Cooper as The Magician. A gun is his Sword, he his Cup of coffee, a whittled flute for a Wand, & his Pentacle is the petroglyph of the owl. I turned off the lights for the final episode-- I think it is the best fifty minutes of television ever, & Terra said it was one of the most disturbing things she'd ever seen. I sent her on her way home, then, & Jenny & I had dinner & watched the ghost of How I Met Your Mother. You know, the show that is still on the air, but should have had a satisfying finale & then ended about three seasons ago.

I had a dream, finally-- my hatsuyume, the first dream of the new year. First, I was a queen, inspecting the battlements in a far-flung castle on a mountain-side. "So you are the reason we lead such boring lives," I said to the general of the castle, as it straddled the pass the enemy would need to take to go deeper into my kingdom. The hills were grassy, green & grey, with black scorch marks from attacks. I fended off an awkward marriage proposal from the general. Then-- after waking up to check my phone just to make sure I wasn't late for work, even though it was the middle of the night-- I went back to sleep. In my second dream, I was a student, an older student-- a prefect or a grad student or something-- in a huge & ancient campus. The sort of environment you wish a university was, with a vast library, a labyrinthine museum, all the sort of ivory tower artifacts you might hope for. I was walking through the belly of the museum-- the hallways beneath the show rooms, the places I tread back in secret-- with a younger student when I found the path blocked-- a security gate was done, that sort of mesh of steel. Very odd, & when I checked the wall I found the silent alarm blinking. While I was checking, the younger student-- a younger me-- slipped under the mesh. I followed, & the lights were flickering in the museum storage, like strobe lights, & a stuffed black panther turned its taxidermied head & noticed me, & I realized everything in the museum had found some uncanny animus & it was fearful & wonderful.
Collapse