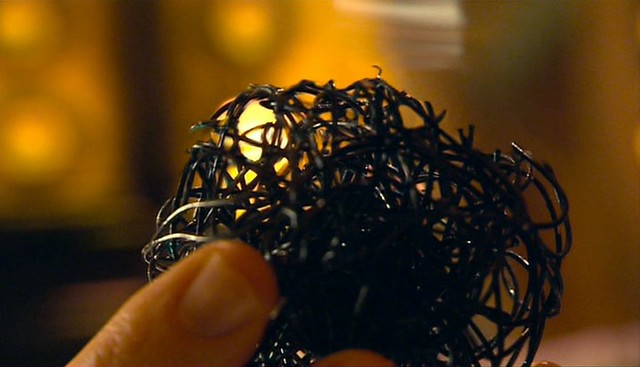 Lazy days continue unabated! Wednesday had some of the same old song & dance, in that I played GoldenEye & went to the gym. Knocked out an hour & forty-five minutes there, & then again Thursday I put in an hour & fifteen, averaging it out to an hour & a half each day. Not too shabby if I do say so myself. The cable is on the fritz-- gremlins!-- so while I've been doing cardio, there is a greater percentage of free weights & weight machines in the mix. Then I came home & it was time for...more

elladorian! Television Night! Wednesday already! Hooray! We watched some Storage Wars: Texas & everyone was forced to admit that the...aggressive unattractiveness was getting to us. There is also the fact that, for me, I want someone to root for, & other than Moe, you've really got nobody. Many Dark & Stormies were consumed. Then on to David Tennant as the Tenth Doctor in Doctor Who, & the episode "Fear Her." I am still no sold; nope. I keep hoping it will click, at some point, & I certainly don't dislike the show, but it isn't for me, at least not until Eleven. We finished up watching Limmy's mesmerizing pen mystery video.

Then yesterday, more of the same, but with two twists in the yarn! First, a visit with

ankledeepruins! I told her when she moved to The Wasteland that it was funny, but now that she was leaving Metropolis we'd probably become better friends, & I was right. Just a quick gossip whiskey klatch before she was off to see Sleep No More (where Jhayne was last night as well, as it turns out). We watched a clip from Big O & then Allison left & I headed over to Kira & Nino's to meet up with Jenny & play with Olivia. It is funny getting reintroduced; you see me every couple of weeks, Olivia, I'm no stranger! But a week or two is a big chunk of her life, at this point. Nino made Bloody Maries & I drank a whole one! A whole small one, anyhow; usually I just want a sip. Kira made lamb burgers & beef burgers & sweet potato fries & I had to restrain myself from eating too much. Galactus hungers for burgers! We came home & I got ready for bed only to have Jenny point out that it was...nine o' clock. Okay, not bedtime yet! Being on vacation is messing with my internal clock. We put on a Fringe episode, instead-- "The Last Sam Weiss," which was fine. Lots of lightning, & the creepy typewriter, but mostly just building up to the finale, which is the next episode.
Collapse