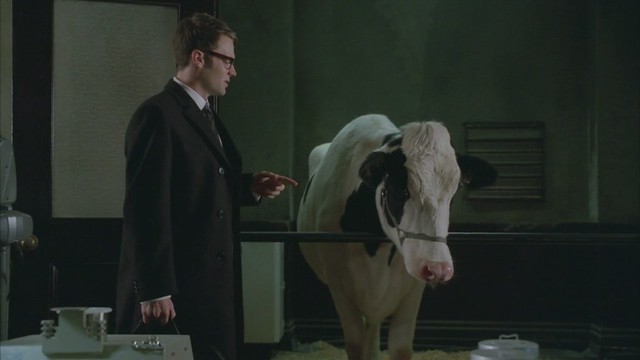 So, yesterday was sort of Xmas Recovery Day, with me basically accomplishing a grand total of nada, zero, goose egg, nothing, null set. Jenny finished up one of the Roman blinds that she's been making for the bedroom, though. & hey, I had to leave the apartment to go get her a staple gun, which was awful torture. Talking to people in the hardware store is hard enough, but I was feeling anti-social, so talking to anyone was a nightmare. Still, I have to suck it up & actually adhere to my ideology & buy stuff from local businesses rather than letting corporate greed manipulate me. Begrudging ethics! Other than that, just a lot of television. Well, hold on, also I finished a book & waxed poetic in a manifesto on the supernatural, so if you could that as being productive, I wasn't totally feckless. I had a little feck. & a lot of television. When I had the stomach flu, Jenny & I watched about eighty episodes of The Office, & we've been blazing through since then, & we finally caught up & watched the Xmas special last night. Written by Mindy Kaling, as Jenny guessed...& directed by Ed Helms? Okay, it is actually pretty charming to have your actors & writers & directors all be the same people. That show isn't brilliant, but it is pretty consistently charming. We also watched Leverage-- "The Lonely Hearts Job"-- which was another episode directed by Jonathan Frakes, television's Commander Riker. I like it when genre actors go on to have careers in the industry, like Mark Hamill's voice work or what have you. Plus, Leverage is really on point; a really well played bromance episode, a solid romance episode, & nobody is an offensive jerk? Yeah, thanks-- just the little nods, like how Eliot isn't a misogynist even though he's sexually promiscuous? Thanks! & how the geek is handsome & in amazing physical shape? Yeah, I like that show. & how Parker is perfect, just perfect? Leverage, everybody! We ended with the Fringe episode "Stowaway," which was fine, but introduced this universe's Lincoln Lee! Lincoln Lee is a member of Fringe Division on Earth-2, but we hadn't seen the Earth-1 version of him, & I'd been keeping my eyes peeled. Making him the straight man, the FBI dweeb, that was just adorable as hell.
Collapse