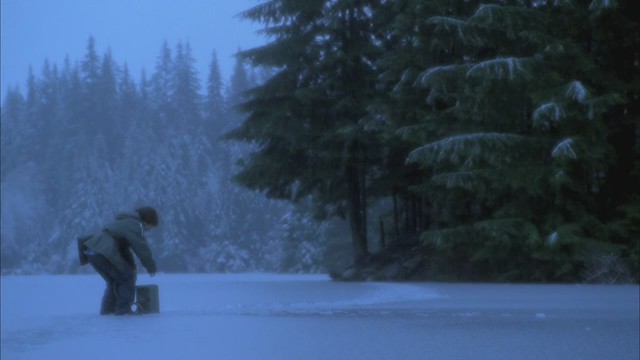 Well, yesterday was the last day of work till the second of January, two-faced January, so that is some positive news. I grabbed lunch with the newlywed Pamela at her office & I tidied up the last bits of work that wouldn't keep till the new year, I wondered if the bamboo plant that Nicole gave me would survive vacation, & then I came back to Brooklyn. I'd sort of intended to go to the gym, but I was lazy, & then Jenny texted me to say she was coming home earlier than I'd expected, so I nixed that. I ate some leftover hamburgers with avocado on top, & I played a little GoldenEye. A lot of lag; annoying. We ended up watching three episodes of Fringe-- the first was "Immortality," a sort of (literal) bug-hunt episode mixed with scientific hubris, as per the strictures of Fringe, which balances the anti-science elements of science fiction against a sort of madcap mad science glee. It strikes a weird balance. Joan Chen was in it, & she has had too much plastic surgery. It makes me sad. After that was "6B," a love story, a ghost story, set in Park Slope. No real surprises there, but I do like it when pseudoscientific technobabble is well done. Shouting "spooky action at a distance!" always helps. & they did a good job making Vancouver look like Eighth Avenue in Park Slope. Then it was "Subject 13," a flashback episode to a young Peter & a young Olivia. It strained credulity somewhat-- they really don't remember meeting? In those magical & intense moments?-- but I liked it, & I'm a sucker for the lo-fi credit sequence.

So, to continue the discussion about weapons, armor & items in my roleplaying campaign, Oubliette. First, the "Enhanced Item" rules in Mage: the Awakening, recapitulated as "Azothic Object" with minor modifications in Strange Alchemies, & no doubt in other books as well. A Merit that lets you increase an items Durability & Structure, as well as its Equipment Bonus. Now, the increase in Durability & Structure is all well & good-- if I was the kind of Narrator to attack items, which I'm not currently, but I could be in the future. Could be. The Equipment Bonus is another matter. Now-- let me be clear, that is currently the rule system I use, for instance when it came to the Sword Reborn of Damocles. I don't think it is a terrible rule...but I think it may be a broken rule. That is-- well, your "attack" roll is your Attribute (one through five, costing x5 to purchase), plus your Skill (one through five, costing x3 to purchase) plus the item (one through five, as per the item) & then now the Merit (one through five, costing x2 to purchase). An Enhanced Item is just a very inexpensive way to bulk up your dice pool, & it becomes especially dangerous when you have elite Characters who are built for that task. Characters with a high Attribute & a high Skill who then have a whole new avenue to develop, short cutting around the escalating experience cost.

Now, I have a trustworthy bunch of Players, so I don't really have to worry about the so-called "munchkin" factor, but that doesn't mean I can't notice a potential area of concern. One way around this is to adopt techniques that don't just escalate the dice pool. Slumberheart's Singing Sword, for instance, uses the "Advanced Action" rules, letting him roll twice & take the better roll, when he spends a point of Willpower. The Possible Sword of the Man in Black, not to let you peek too far behind the Narrator's curtain, uses similar mechanics, allowing a "Rote" check, letting the wielder re-roll failures with a point of Willpower. Strange Alchemies has a "9 Again" ability for five dots. A nice side-step, & one that really hits the "magic item" note, I think. Don't get me wrong; I also really like a straight up improvement to the dice pool-- I mean, sometimes it isn't worth messing around with the rules if the concept doesn't fit-- but I am just covering the spread.

The other thing I think about-- & this is an idea I consider regardless of "special items"-- is bonuses to non-attack rolls of various kinds. Blue Glory's crystal sword is like this, in part-- in that it adds to her Initiative roll. It is light & fast, so it helps her get the drop on her opponents. A no-brainer, especially since "Fast Reflexes" exists for the sake of comparison. Similar ideas occur to me for Defense & for "threat range," among other things. In Armory, "Polearms" grant you a +1 to your Defense, which I've always liked; simple, effective & evocative. It is enough of a bonus to notice, it is a simple enough bonus not to cause headaches & it is the kind of bonus that makes you think "well, sure, you've got that guy an extra pole's length away!" Now, traditionally World of Darkness doesn't use miniatures or battlemats, but I do. As a side note, using miniatures with non-miniature combat systems is super freeing. You can play fast & loose, let people dive for cover or try to hurdle things, all without getting caught up in the chess board rules of more heavily designed systems, like Dungeons & Dragons. That being said, using squares & hexes does allow you to do new things like give whips & polearms an extra hex of range. What this makes me think about are...other avenues that could be explored. Concealment, for instance-- that is an important balancing mechanic, & you could have a telescoping quarterstaff or something like that, right? You could have Armor Piercing as a mechanic, too, now that I think of it.

I don't like the extended rules for weapons in World of Darkness. I think a lot of the "heavy" weapons are just flat-out broken, & I don't think the Minimum Strength requirement is a good one. What occurs to me, sometimes, is to take the generic system of the core book & to...well, to build a formula for balancing it, allowing Players & Narrators to build their own weapons. Something like, the default weapons is "One-Handed Weapon: +3 to attack; Concealment: Long Coat." It doesn't matter if it is a katana or a warhammer, those are descriptive elements, not mechanical ones (that is also where a Trait System would differentiate them). Then, you could look at the formula: making it two-handed would allow you to increase the bonus, or decreasing the bonus would let you have an armor piercing feature, or an Initiative bonus, or a bonus to Defense, & so on. Taking a Merit would also give you extra points to play around with.
Collapse