I don't know a lot about Victorian Romance as a genre. I would go as far as to say I don't know anything. I mean, I have assumptions & notions about the conventions & tropes of the genre, but those are all gleaned from second-hand sources. I wasn't an English major in college, so I missed a great deal of the canon-- the Brontës are a big deal, right? Thackery? I've read some Dickens, but the piece of Victorian literature I have the most connection to is Darwin's On the Origin of Species. At some point, it becomes Gothic literature, & I'm familiar with a lot of that...oh but look, I'm falling off point. What I'm trying to say is this: Tooth & Claw is a Victorian Romance with dragons instead of people. If I was more familiar with Victorian Romance, I probably would have liked it much better; as it is I liked it fine. I feel like, for me, it should be been a little bit less anthropomorphic. I liked the insights into dragon society, but I thought that hats, carriages & farming was just a bridge too far. Or rather, if not too far, then just a bridge in the wrong direction. I get that it allowed a greater deal of direct social satire, but I think the same could have been accomplished, a bit less heavy-handedly. Because I'm not well acquainted with these sorts of books, the tension was, if anything, too effective. It was affective; it stressed me out! Things are bad, things are bleak, obstacles mount...until finally in the eleventh hour everything works out fine. As you expect it will, but still. I think I started grinding my teeth!

That being said, two things about this novel were fantastic. First-- the acknowledgement of common sense on the behalf of the characters. This is a pet peeve of mine that Tooth & Claw smartly avoids-- when authors make a clumsy pass at dramatic irony by having the characters do something that we the audience know is the wrong thing to do. You know, everyone yelling at the Final Girl of a horror flick not to go into that room, or to look behind her, or whatnot. Jo Walton has a few moments where that tension could develop-- where the reader's pessimistic speculations are about to start-- that she nicely undercuts, subverting your unfortunate expectations. You know, the female dragon in a tenuous social position is going to send a letter with sensitive information in it, & sets it with the mail to be taken to the post office...you start thinking, "oh, that bad dragon is going to read that letttttter..." but then the dragoness thinks better of it & decides to take it & post it herself, since she doesn't want the antagonist to snoop & find it. Phew. Or when there are plot twists that seem obvious-- stressful misfortune-- & the characters think of it themselves, too. "What if I was forced to marry him! That would be awful-- but patently absurd."

The other thing that stands out is the biology of the dragons. No, wait-- the ecology of the dragons. No, I guess I mean the culture of the dragons? No, the uh, thaumaturgy of the dragons? I don't know what term to use. The mechanics of the dragons on a biological level & how that informs them socially. The evolutionary psychology of the beasts, so to speak. In particular, I find the cannibalism very interesting. Dragons care about gold, title & they care about meat-- dragons grow by eating the flesh of other dragons. Dragonets are wingless wyrms, & then as they grow-- if they grow-- they gain flight, & eventually, possibly they gain fire. The only way to grow-- & size does matter-- is by eating other dragons. Per the Church, nobles are to cull the population-- dragonets that are weak are eaten, to the benefit of the aristocracy. When a dragon dies, his flesh is a major component of his inheritance-- in fact, the plot of Tooth & Claw is based around a legal dispute regarding the consumption of a venerable elder. Clergy get the eyes of the dead dragon they minister to. When dragons go to war, the bodies of any casualty are divided amongst his unit, & finally, the bodies of executed criminals are used to settle legal disputes over the division of dragonflesh. That right there is brilliant stuff; I'm strongly tempted to run a Dungeons & Dragons game where everyone plays a dragon & scrambles for rank. 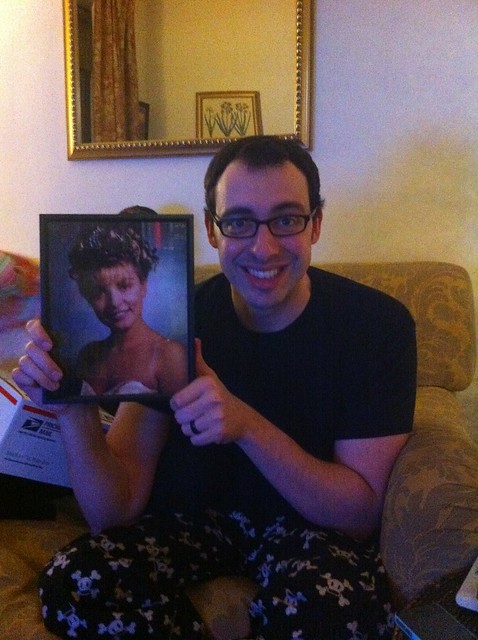 You know that thing you do sometimes, when you are walking alone & you start singing to yourself, improvising lyrics? I do, anyhow. & how sometimes, your on-the-spot song is just apt, just real science dropping? The words just come together, your subconscious stringing together mad rhymes? Well, to me it does, anyhow. & today I was walking to the R train, my lips & neurons hand in hand to deliver fresh beats, & I remembered the time I came up with the illest, dopest songsmithing ever. I was probably fourteen years old, waiting for the big yellow school bus in the snow, puffing frosty condensation, & I started singing about The Silmarillion. It just all knit together-- I hope the ice from my breath froze & recorded it-- just the whole thing; Ungoliant swallowing the Trees, Fëanor rebuking the herald of the gods, the Noldor crossing the ice-desert, Beren & Luthien Tinuviel, the Fall of Gondolin, everything. I was the only one there, but it was a magical moment. A touch of Taliesin. I'll always remember it happening, even if I can't ever recall the words or the music. 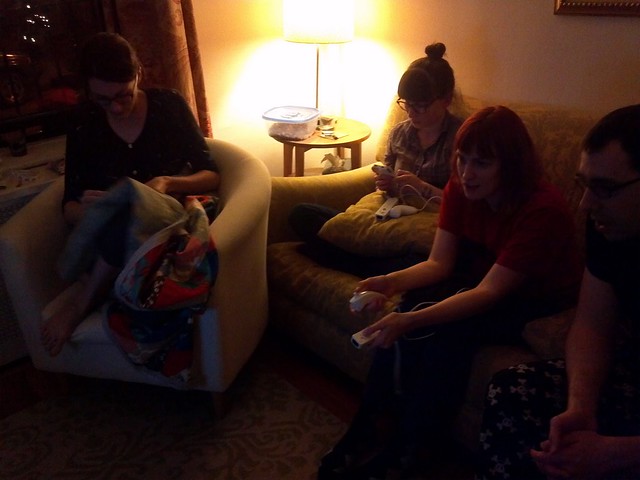 Last night was Television Night! Hooray! I walked through the door & instantly

fatbutts & her dog Archie were buzzing to be let in. Okay, we'll get started right away! Lilly played a little GoldenEye, & Jenny cooked up some burgers & green beans for us. Tasty stuff. I did dishes & while I was finishing up,

ranai came home. We waited a little bit & then blammo!

fordmadoxfraud. Okay-- the gang is all here, so what're we going to watch? Er. That is a little bit trickier, since we're head dead air. Storage Wars, that is always solid. Storage Wars: Texas? Oh, well, I basically hate all these guys, except The Doc, & he isn't even in this episode? At least we get to see the old Harley Davidson nut freak out. Then Lilly laid out some loot! She'd gotten us presents! She gave me a framed photo of Laura Palmer from Twin Peaks-- the Homecoming Queen photo that features in the credits? A basically perfect gift. She gave Jenny My Neighbor Totoro slippers! Lilly nailed it! Danielle got a box of wine with a curly straw & David & Maggie got an orchid! So, pretty dang successful! Eventually hang-outs were done, & I went to bed. I woke up in the middle of the night seeing a Grey Face peeking at me, & then it slithered behind the bed. I tried to find it again with the light from my cell phone, but no luck.
Collapse