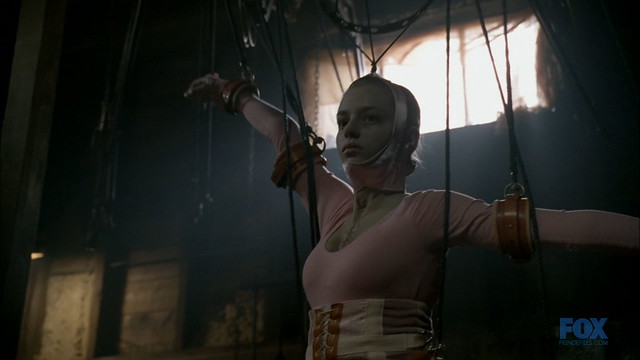 Yesterday was supposed to be a fairly big deal-- we were going to have about a dozen people over & talk about The Big Year-- but Jenny came down with a sore throat. I spend a chunk of the morning scrambling for an alternate location, trying to salvage things, but I ended up having to pull the trigger & put Old Yeller down. Or well, just saying we'll reschedule for January. The rest of the day was sort of a wash! A big whirlpool down the drain. Made English muffins with spinach & fried eggs-- without breaking the yolks on any of them!-- with sausage, & then ate that all day. We did watch a bunch of Fringe-- "Marionette," "Firefly" & "Reciprocity"-- so that was something. They were all really enjoyable, but "Marionette" was my favorite by far. It could have been a Promethean: the Created origin story! & the extended "dance" sequence was sublime. It lingered far too long; it was exactly the right length, if you know what I mean. The awkward duration really underlined the obsession & horror of the scenario, & the mise en scène of the basement & puppetry rig was fabulous. "Firefly" was a lot of fun, too, but would have been better if they hadn't already done the "Butterfly Effect" story with that guy who was murdering people by causing chain reactions (on account of, because he was Charlie from Flowers for Algernon). I snuck out to go to the gym, but I wasn't feeling too great myself-- a week of having a cold & powering through it to go to holiday parties having taken its toll-- but I still hit an hour. So, while I have a pretty tepid week at the gym, at least I held solid to my three days a week schedule. I think for the year I was three days a week, actually-- I mean, if you average it out, I did four days a week about as often as I did two days a week, or no days a week. Then I came home & we watched Castle-- a weird episode that feints like it is going to be a Saw-like den of torture but then takes a hard turn for the weird with a sudden tiger appearance. & that was that. Dust off my shoulders. Let me clear my throat.
Collapse