I've been waking up at six in the morning lately, just because my biological clock is all effed up. All these Holiday Parties are messing with me circadian rhythms. As opposed to my cicadian rhythms, which tell me to hibernate for seven years & then swarm. Today I woke up at five thirty, which is even worse. Just get up, alien brain in an alien skin, awake & alive. Unscrewed the top of the espresso pot...oops! The handle broke. Great things come to those who wait! The early bird gets the worm! Yes, today is full of worms, so far. I'm not really upset, or anything, just bemused I guess. Yesterday was another work party-- the last one, though, at least I hope so-- & Jenny came along to it. Wait, I'm getting ahead of myself! I should mention that Terra & I went to lunch with

ravenface, dear dear old thing. We went to Rye House, because as I've mention, it is my "spot." Anyhow, then it was the work party; not that I really have much to add about it? We talked to the "German foreign exchange student" for a while. There was a spill, but I was in no way responsible for it; I only note it because wine got on my shoe. Also, there were people who were like "who are you?" that I thought knew who I was, but anyhow, now they know. Good. I mean-- it served the function that work parties are meant to serve, right? & then home, & then a burrito, & then we finished up all The Office episodes on Netflix. & then to bed. 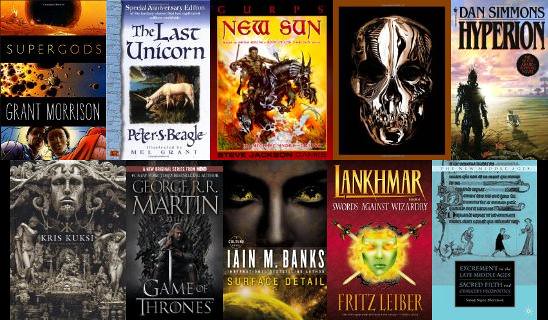 Alright; my annual Best Books of the Year! I know I'm jumping the gun a little here-- these keep coming earlier & earlier in December-- but I'm anxious to talk about it. I'm at a hundred & twenty-one books for the year so far, & while I'll get a few more under my belt before the ball drops in Times Square, I'm pretty happy with that number. It is a bit of an interesting list, as it turns out; I always find myself surprised by some of the idiosyncracies in my taste. What ends up sticking with me. As usual, I have some books that are stand-ins for a greater category-- a single book of the Hyperion Cantos, one volume acting as an avatar for A Song of Ice & Fire, or the Lankhmar books, that kind of thing. I've also included an Honorable Mentions list, which I think ends up being just as valid as the Best Of list; over the course of time I find that some books made a greater impression on me than I noticed at the time, while other books that I thought knocked my socks off lose some of their lustre with the passage of time. I re-read a couple of books this year that I almost wanted to throw on this list-- All-Star Superman & Brother Termite-- but I thought it best to stick to books that were new to me. So then, let's get to it! Drum roll, please! 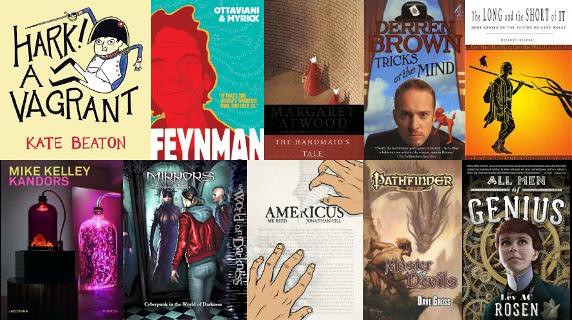 Hark! A Vagrant by Kate Beaton.
Feynman by Jim Ottaviani & Leland Myrick.
The Handmaid's Tale by Margaret Atwood.
Tricks of the Mind by Derren Brown.
The Long and the Short of It: More Essays on the Fiction of Gene Wolfe by Robert Borski.
Kandors by Mike Kelley, edited by Rafael Jablonka.
Mirrors: Infinite Macabre by White Wolf.
Americus by M.K. Reed & Jonathan Hill.
Master of Devils by Dave Gross.
All Men of Genius by Lev A. C. Rosen. 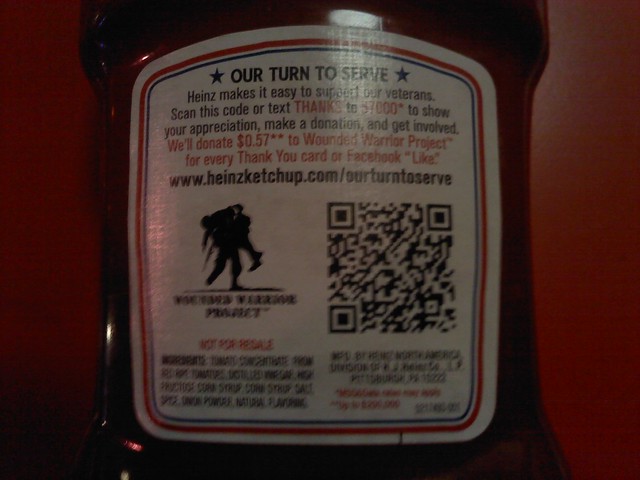 Why is Swamp-Thing on a ketchup bottle? Saw this at lunch with 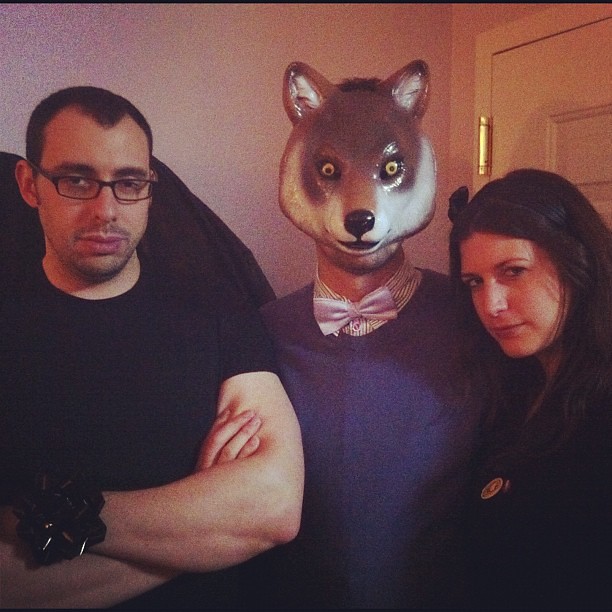 (A sleepy, unflattering photo of me with Brian & Jocelyn from Amy's birthday.)

A full dance card! After lunch with

ravenface, Bryan & Richard, it was back to work-- actually a pretty productive evening. Then Terra & I went to meet up with James,

fordmadoxfraud & Simon at Rye House for drinks. I had a Ballast Point Barrel Aged Sextant Oatmeal Stout, which was fine-- everyone else seemed taken by it, but I just wished it was Bourbon County Stout from Goose Island, I guess. Oh, & I left myself a note in my phone to mention that I'd had the Dalwhinnie 15 at the work party; more to the point, I convinced Simon to order the Ardberg, which I think I am officially quite taken by. I was there for a while, but before too long it was time to head to Amy & Omry's engagement party at Terroir! That was a fun time; I talked to a couple of strangers for a while (about...dead babies? Not my fault!) & then ended up in the corner with Chris & Brian & Jocelyn. I'd ordered a bottle of beer from the waitress-- the Brooklyn Sorachi Ace that we'd enjoyed so much at Jenny's birthday, but the waitress was confused & charged Chris. & Chris just paid for it! It was for the room, anyhow. I ended up getting Du Bocq Purnode Lacu, which was fine, but just made me wish it was a legitimate gruit beer. Anyhow, the company & the event were lovely, & then Chris & I rode the train home together & I waxed poetic about Homestuck & the Protomen. As I am wont to do. & now there is some party in an apartment on the second floor & I am trying not to have a curmudgeon aneurism.
Collapse