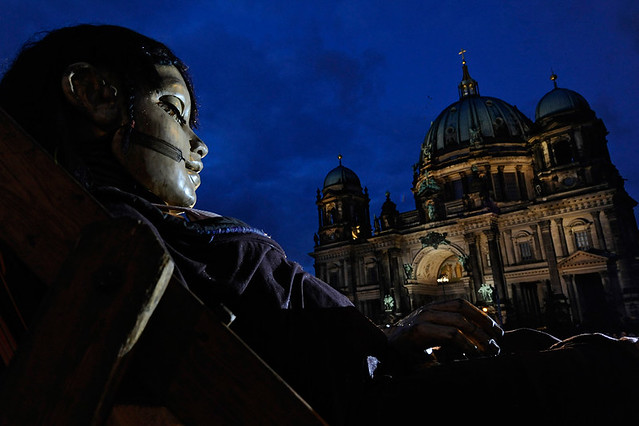 After the first part of this episode, the Players followed the dastardly Black Jaguar on Golden Scales-- center of the so-called Sugar Plum Rebellion, now Duke of Sugar Plum, heir of the Licorice duchy & pure-blood half brother to one of our protagonists, Blue Glory the Nightmare Lotus-- onward into the Marchlands of the Black Palace, & eventually into the grounds of the Black Palace itself! Like a nocturnal Taj Mahal, all in iron & green patina'd bronze, rising up like the tip of an iceberg atop vast complexes below. It has been a while since the last time Blue Glory & Curie First-light of the Stormstruck Tower were here-- even longer for the Duke of Saltwater, Slumbering Heart Dwells in the Blue House. In front of the Palace lies...an enormous giant? A titanic puppet? A...ah, the gondola of a massive airship, carved in the likeness of a colossus, its bag waiting to be filled. 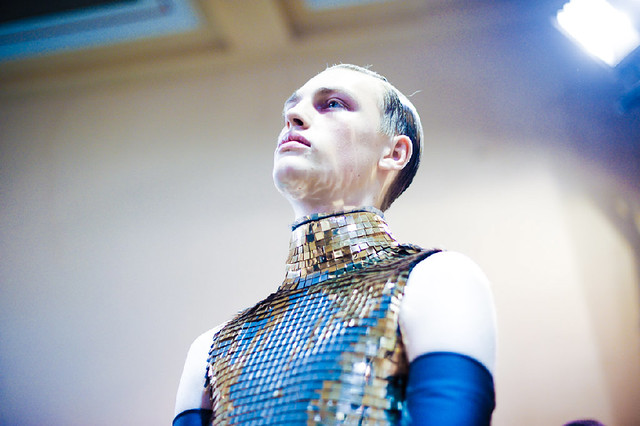 Black Jaguar unmasks & takes off his black outer layers, revealing a pretty Alpha with an unpleasant snarl in his smile, dressed in a shirt of golden scales. The Black Palace has many, many secret ways, & he takes the Characters to one of them now, along with Danse Ballet Macabre-- his mother, the Spice Drop Duchess & wife of the Licorice Duke-- & Lovelace Vespers--his soon to be betrothed. Blue Glory helps Lovelace up onto the back of her destriar, Herakles Nightmare-- coaxing her up despite the creature's bloodcurdling mien-- & the black metallic shale of the cliff face slides away, spar by spar. Like the teeth of a lock, tumblers grinding open, letting the oppressive darkness of the palace's secrets ooze out in inky blots. 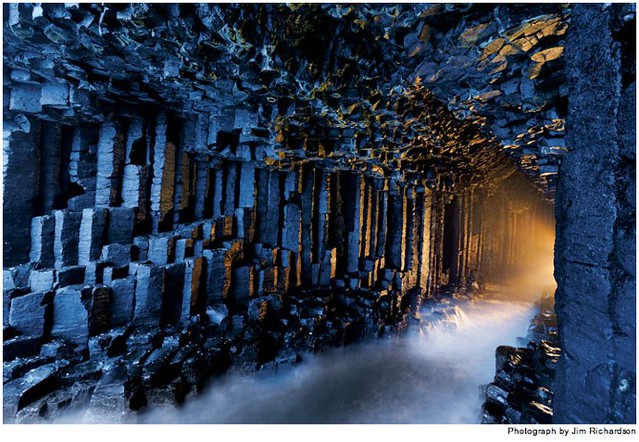 (Into the Underpalace; "Hebrides" by Jim Richardson.)

Into the quite Stygian depths they go, & almost immediately their glims are doused! Or at least, put upon-- when they were last in the Undercastle, the same effect manifested, dimming their torches, their lamps, even their anabaric torches...even the one that acted as a foci for Blue Glory's now-lapsed faith in the Trump called The Hermit. The dark in the belly of Licorice is a tangible spiritual force of obtenenbration. Down dark branching passages Black Jaguar & Danse Ballet Macabre lead them, deeper & along the very veins of the stone...until at last, the party realizes that they are lost...not just from Black Jaguar on Golden Scales & Danse Ballet, but from each other as well! The twisting labyrinth, the maze of corridors, the pressing shadows-- all working against them to bury them in supernatural confusion! I offer the Players a choice-- do they want to navigate their way out through Secular means, or Spiritual means? Not wanting to lead them astray, I qualify that not only will this qualify their results (I have a range of options prepared behind the table) but that it will effect their roll-- Attribute plus Skill or Attribute plus Merit. 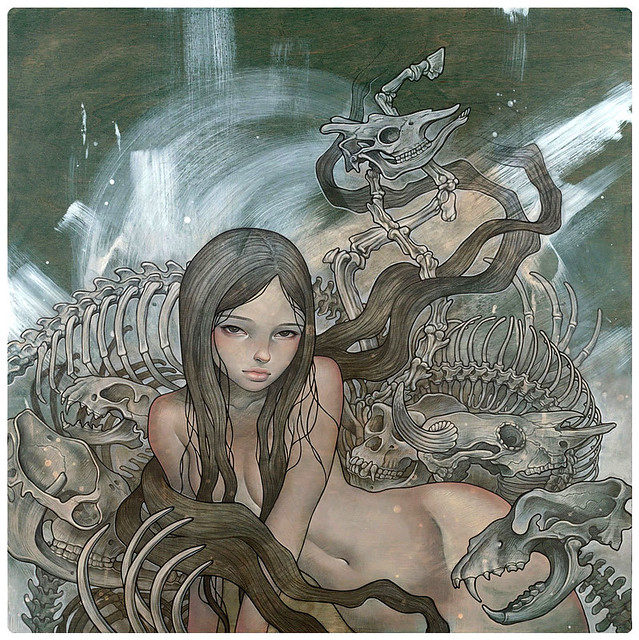 First up is Curie, who alone elects the Spiritual path-- drawing on his deep connection to the Chariot Trump (though slightly disrupted by their blasphemous murder by the assassin Raphael) he calls upon the Chariots wheels within wheels to guide him out of this place, to make the way clear. & he finds himself guided to...My Dear Wormwood! When he & Blue Glory came through these tunnels before with the now-dead explorer Coyote's Lucky Day, they found huge chambers recapitulating Bartók's Bluebeard's Castle, & at the end they found a tremendous pile of bones &...My Dear Wormwood! The spouse of the Licorice Duke that was unfaithful in his, the kernel around which his legendary murderous rages formed...starting with her! My Dear Wormwood is the ghost at the bottom of the Licorice Duke's blood soaked past. She slinks about Curie, tempting him with gifts of necromancy & soul-stitching, all wiles & guile, but eventually Curie comes to the throne room of the Licorice Duke. 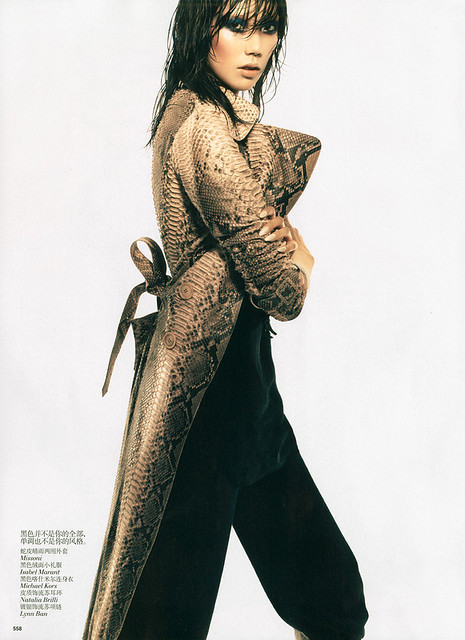 Blue Glory relies on her own talents-- not even the implied approval of The Hermit guides her now-- & pieces together a mix of childhood memories & dungeoneering expertise to move through the caverns, until at last-- just like that!-- she comes across her mother, the Human courtesan Thoreau Twilight. As My Dear Wormwood plunged the Licorice Duke into his blackest race for decades-- though I don't wish to imply he isn't fully culpable for his insatiable jealousy-- it was Thoreau Twilight who pulled him forth. Who Petaled him, as they say. She is his mistress, & though she is aging, she bears it very well, & still has the Duke's heart. Thoreau Twilight & Blue Glory-- sometimes called Descartes Midnight, though not since the Fall of the 101-- manuver through the snarls of the Underpalace's secret ways, planning their strategy & whispering advice to one another, until at last they come to the heart of the Black Palace, where the Duke Regent awaits. 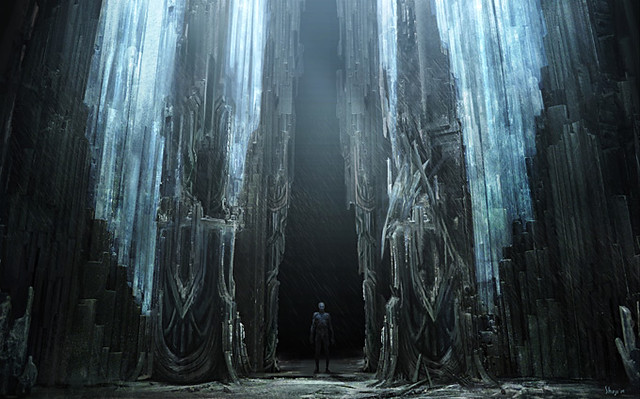 (The Licorice Duke in the Labyrinth; Thor concept art.)

Slumberheart too relies on his skepticism, his own natural abilities; he has a talent for making crop circles & zen gardens, & he draws upon that experience, that natural intuitive understanding of paths & ways. He rolls an epic number of successes on his roll & gets the optimal secular result-- he goes directly the the center of the labyrinth, following its paths like second nature...because it almost is like that, in fact. Before the Duke of Saltwater became the Pauper Duke, before he was the Duke that started the Civil war against the Licorice Duke-- Black Bear & Slumberheart were comrades, brothers in arms, best friends. & this path is like a map of his heart, & it leads Slumberheart directly to the throne room, where the Licorice Duke waits without, in shadows. He & Slumberheart exchange greetings, the sort of bittersweet pleasantries of two samurai of rival clans before a battle. The calm before the storm.
Collapse