I can't tell yet if I feel sick because I was having bad dreams, or if I was having bad dreams because I feel sick. I woke up-- I woke Jenny up!-- shivering in bed, while she had the covers off her legs. Later, I closed the window & put on more clothes & I woke up again sweating, tossing & turning, whimpering. The dreams-- were about Habibi & Star Trek: the Next Generation? Some aliens had invented a forcefield that would let you exist in the vaccuum of space with nothing but an object the size of a postage stamp; it would even allow you to enter a planetary atmosphere, fires raging around you. To do it, you would just sort of slide "down" the hull of the Enterprise, like an incredibly long waterslide, until you shot off. Data went first, then Tasha Yar-- she was there, but I had a strong presentiment of her death-- but Worf refused to go. At first people thought it was because he was afraid, but it was because he suspected Doctor Pulaski of being a serial killer. You know how, in The Original Series, whenever there was a ray that affected people's brains, Sulu would take off his shirt & grab a sword? It was apparently the same thing with Pulaski-- Worf called her "Millicent"-- but she'd get all Jane the Ripper. She'd apparently captured him during one of these episodes & tortured him. I don't know-- I know that doesn't sound scary, but then the fields started malfunctioning, & I was alone in the black void, then I hurdled, Falling, ablaze, flames crackling through the energy fields, burning my body black. I landed in some sort of continental garbage dump-- mostly barren, but with just enough trash to make it a junkyard. Bad people lurked in it, wanting to take advantage. You were supposed to be able to just fly home with the field-- think lovely thoughts!-- but it just fizzled. I was exiled & alone in an ugly world. & then I started worrying about how I'd get illustrations to accompany my book review of Habibi. Just a stupid repetitive stress dream. I actually-- sitting here typing this-- don't think I'm sick. I just think it was an old school night terror. You know, the kind I used to get all the time, but that living with Jenny has largely erased. Shivering on the apartment floor under a nest of blankets thinking about magnetism, foxes. Bad, sick angel.

Dreadful angels knew,
if all men were magicians,
devils had their due.

There are two main things to say about Habibi: one, this book is incredibly gorgeous, just astonishingly beautiful. Two, does Craig Thompson know that he's a white cisgendered man? I mean, the book is an alternating litany of really wonderful myths & alchemical musings...intercut with extremely problematic sequences. I mean, like, one ill-considered or inappropriate trope after another, presented totally obliviously. I'm certainly not implying that a white guy can't write non-white, non-male characters, but do it with a little more...consideration? There are times when Thompson seems to be condemning rape culture & the male gaze...but he does it by commodifying the female character, Dodola? & there are moments where he seems almost about to address the racism that the black character, Zam faces...but then he undermines it with some slapstick "Black Power!" humor? There is an arc devoted to some intersex & transgender characters-- tied up with the court eunuchs-- which is just sort of dropped in, a sort of "incidentally queer" cul-de-sac that isn't mentioned again. It isn't even an offensive portrayal-- but it is problematic, & Thompson seems unwilling or unable to look deeper, to acknowledge the problem & deal with it. It never edges outright to a point where it demands condemnation...but there are just lots of problems with it.

I honestly can't quite grok it; it seems like Thompson wants to have his cake & eat it to. No, that is a terrible metaphor, because I don't think he wants sexism & racism...I just think there is a sort of hipster irony at work here, & it utterly fails. Like Thompson thought to himself, "oh, I get it, I'm down, so that means that I can totally use it, I'll take it back!" You know, like one step above a "I like rap music, so I can use the n-word" sort of attitude. & no, no you can't, Craig Thompson. You needed to be wary of Orientalism & cultural appropriation, but instead you ignored them, at your peril, & it compromises your whole book. I mean, the nearest comparison to Habibi-- an unavoidable comparison, I'd say-- is Neil Gaiman's Sandman story "Ramadan," which is very much in a similar vein...but then, Gaiman doesn't indulge himself in stereotypes the way Thompson does. Thompson walks a tight rope between the mythology of the Middle East & the mythology of the West about the Middle East, & all too often he falls, he fails, & it becomes an exercise in...well, psycho-sexual torture & exoticism. He doesn't always fail, but it is surprisingly in the the human moments that he does; the frame story is the most questionable aspect, while the bits of story adapted from the Koran or the Hadith are just phenomenal. I mean, look at this stuff! 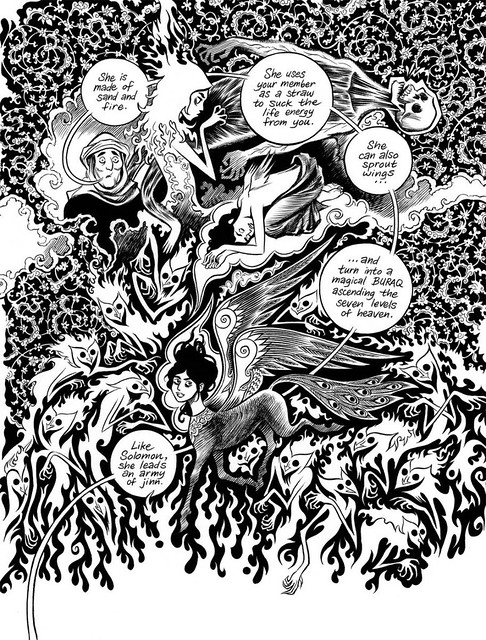 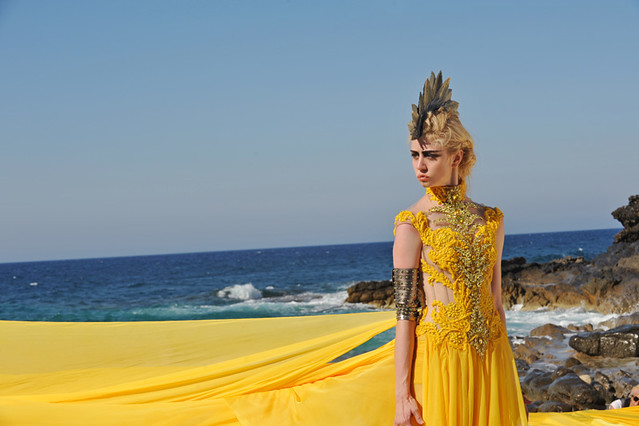 When I related my bad dreams I forgot to mention that I dreamt I was struck by lightning. Or like, if not lightning, than electricity from a blown power transformer. I was lying on the ground with the garbage, paralyzed, muscles locked up & spasming, & no one would help me. That was like a meta-dream; I had a hard time realizing it was a dream when I woke up to go to the bathroom. Didn't want to leave that out! Anyhow, Jenny convinced me to stay home today since I had a fever; apparently she thinks that I'm crazy that I think I'm going crazy, when she thinks I'm just sick. So maybe I am, so what of it! Other than that, though, last night was lovely. Jenny was babysitting Olivia &

ranai went out to do something or other, so I had the apartment to myself for a few minutes! & then when Jenny came home we split a bottle of wine & watched Community, Parks & Recreation, & half an episode of Mythbusters. Oh man, Nick Kroll, a Shirley & Jeff episode, the return of Abed as Batman? Oh gosh, adorable Leslie & Ben romance, courtroom drama, ensemble jokes? A Lethal Weapon Two myth...involving liquid nitrogen? A good night for television.

Wednesday was a good night for television, too, because Wednesday was Television Night! Hallowed by the ages! A feat not to be lightly forgotten! The whole gang, starting with me & Jenny & Danielle, then adding

elladorian to the fray, followed eventually by

fatbutts & James! I guess not the whole gang, since Lilly's dog Archie wasn't there. Beers of note were the Southern Tier Old Man winter ale & the Samuel Adams Double Bock which was in fact too sweet but not nearly as awful as Maggie made it out to be. There was also red wine & white wine, but I didn't note what they were, & didn't find them particularly notable. First up was Storage Wars which I think everyone is finding unexpectedly charming. "I'm glad this is a thing now," someone said-- David? Maggie?-- but yeah. It is good group television. Then the main event of course-- America's Next Top Model All-Stars. On one hand, it was a Modelland themed episode-- complete with all the Tookie De La Créme references you could want! On the other hand, though, I don't like the narrative they are building. Allison obviously deserves to win it, Lisa shouldn't be there, but I think the rumors that Angela will be the winner might be true. Her rags to riches story-- well, "riches,"-- makes the best marketing plot for Modelland. Allison as the weirdo done good is the story I want to see, but I'm wondering if they aren't setting her up for a fall. Sad.
Collapse