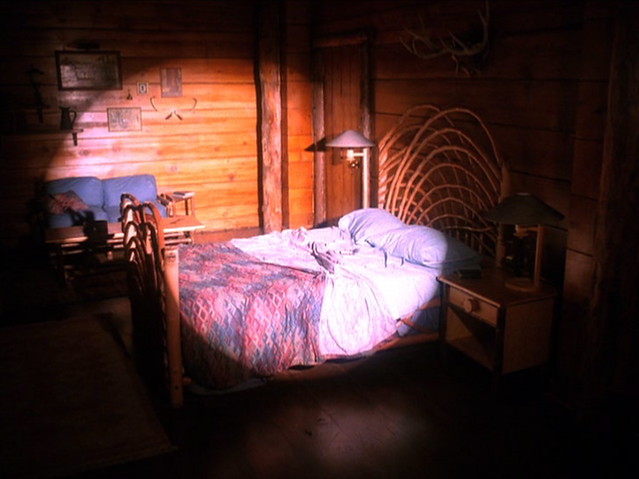 Had a sayonara lunch at Rye House for Bernie with James. Had their special, a "deconstructed Wellington," which was basically a steak sandwich with a whole mess of foie gras, & as Bernie & I both said-- "you had me at foie gras." Back at the office, Sherene & Greg & I ate a bunch of the gross Bertie Bott's Every Flavor Jelly Bean, & at one point tricked Michelle into eating the vomit-- which really is the worst. It was a...shall we say magical moment? Seriously though, those jelly beans are a good way of transmitting the Harry Potter meme. Jenny had plans to see Neil Diamond on Ice tonight, with Phil-- & while they got rained out, she still stayed out, so the evening was mine to dispose of as I saw fit! Terra came over & we picked up where we left off with Twin Peaks. Speaking of picking up where we left off, & Twin Peaks, I finally reconnected with tiny little goth Erica from college! A pleasant punch of nostalgia. Anyhow, it was the end of Josie's arc, & the start of a few other ones. Knocked two episodes down & then Terra was off back to the northern borderlands, & I actually got my act together & went to the gym. Seriously, jam packed night! A modest workout; an hour of cardiovascular work & half an hour of free weights. Back up to the eighty pound weights on the church bench, which is something, & I've moved up a notch on bench pressing too...though I don't think I'll ever be one of those guys who loads the bar up with tons of weights to "blast his pecs." Came home just in time to meet up with Jenny! A bit of a mixed bag, though; she was home early, but she was home early because she wasn't feeling too well. We watched an episode of Storage Wars & then went to bed, cuddled, & blammo! That is how we got here, to this morning.
Collapse