The Rise of Endymion by Dan Simmons.

Formulae filled eyes.
Dance on the head of a pin!
Bright forcefields for wings.

Well, it may have taken till the final book of the Hyperion Cantos, but at least the Shrike on the cover of this book has four arms! I can be fanboy enough about things that niggling details like that can get under my skin. "Niggle," by the way, can be traced etymologically back to Old Norse nigla, meaning "to fuss about small matters." I looked it up. So let me summarize my feelings about this series, since I ploughed through it straight this month-- enough to finish the penultimate book on my morning train ride & then go on a mission to find the last one on my lunch break. First off, it isn't really four books in one series so much as two sets of two books-- Hyperion & its sequel Fall of Hyperion are a distinct & discreet entity, & are mostly about Chaucer & Keats. I can't stress that enough. Endymion & Rise of Endymion are a matched set, & also work as a sequel to the previous series-- I mentioned before how clever I thought Simmons evolution of certain pieces of Hyperion into the status quo of Endymion was. Looking at the whole thing, the first two books-- by which I mean the first of each cycle, Hyperion & Endymion-- are outstanding, ambitious works that really hit all the notes. The sequels-- Fall of Hyperion & Rise of Endymion-- are good, enjoyable novels that have a hard row to hoe; both a hard act to follow in the preceding volume & then the onus of the promises made in the set-up. Simmons creates a world where discussing the sub-atomic nature of love is necessary, & then...has to talk about big philosophical questions through the engines of science fiction. He pulls it off satisfactorily, but it is the questions-- in the first books-- that outshine the answers in the second books.

fordmadoxfraud asked me last night if Simmons was like Herbert, given the spirituality of their respective works. First, I reacted like I'd been slapped, but only because I thought of the sequels to Dune, which...listen, read Dune & then stop. Even the ones Herbert wrote aren't any good. Then I thought about it a little more, about the actual question, & it isn't a bad comparison...but while Dune keeps the camera squarely focused on the world of Arrakis & the messiah, the the Hyperion Cantos have a galactic scope, hopping from world to world, & the story focuses on the everyman closest to the messiah, rather than the messiah herself. & for that matter, Dune has a Mahdi & the Hyperion Cantos has a Buddha. Or else-- especially toward the end of Rise of Endymion-- it is like the world before Iain Bank's Culture novels or a paltry galactic civilization of about a thousand worlds on the cusp of either becoming Involved or Sublime. The TechnoCore falling short of the Minds by a wide swath. & I can't help but randomly think of other comparisons-- the climb up T'ai Shan in spacesuits brought the beginning of Miracleman: the Golden Age, & the "A. Bettik" nomenclature of the androids reminded me of R. Dorthy Wayneright in Big O (a show I recently described to Imogen as "...like Batman, if instead of being Batman, Bruce Wayne had a giant steampunk mecha. & everyone-- everyone!-- had amnesia, & the mecha are basically dream gods who talk all Old Testament & there is an awesome robot little girl."). Even the squids in the Ouster biosphere (an organic Dyson sphere) just make me think of Spelljammer.

I use intertextualism in Oubliette to bring emotional resonance, a sense of wonder & spirituality-- a way to evoke an other, higher universe, the one where the Narrator & the Players are. Simmons does something very much the same; his adoration of poets & koans isn't over used & isn't beside the point-- they are an attempt to use the real world's works as anchor points for his fictional world. It works, & by using it as a skeleton, gives him a vast canvas with plenty of room to play on. & he does play. The hardiest crop on a terraformed Mars? Bradberries. The mutant livestock on T'ien Shan? Zygoats. It really is the little details that Simmons excels at; by simply talking about the colour of the clouds on a gas giant or the dance of shadows on a cliff face as the characters go down a zipline, he manages to impart a sense of alien beauty, peppering in spice that really evokes something literally otherworldly. Heck, he makes the Pontificia Cohors Helvetica, the Swiss Guard, into the biggest bad asses in the galaxy. How awesome is that? The biggest problem with the Endymion Cycle is that Simmons undermines the Hyperion Cycle by having Aenea outright say that Martin Silenius was wrong when he wrote it. No sir, I don't like it. Bringing in Het Masteen is a clever use of time paradox, but bringing back Fedmahn Kassad is overkill, no pun intended. Still! He pairs the Big Bang off with the Little Whimper, he has a vastly old vastly foul mouthed character call another a "welfare queen," he lists Buddhist monsters & demons to explain the Shrike's appearance in the court of the Dalai Lama, he creates the colour-coded Amoiete Spectrum Helix utopia off-handedly...the gentleman in question can write. 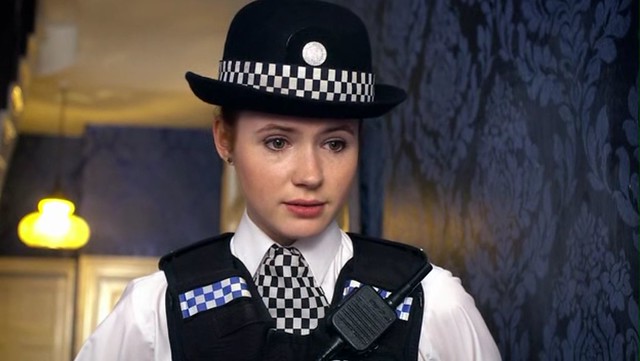 I felt like I was twelve years old a little bit last night-- I was on the last chapter of the book I was reading & I couldn't handle being talked to! I just wanted to finish, to be done with it, so I ignored everyone even when they talked directly to me, & eventually just got up & walked into another room. Yep, that sounds like elementary school in a nutshell. But! It was Television Night, & as soon as I flipped the last page, I came out of my shell & returned to the land of the living. Me, Jenny,

fordmadoxfraud-- the old band, back together again! The boob tube wasn't complying though; an America's Next Top Model All-Stars clip show? More like skip show, am I right? We watched an episode of Storage Wars, which really is some decent reality show fun; unlike some reality programing like the Real Housewives or whatever there are actual characters to root for, & they have enough of a framework that the editing to build a narrative doesn't seem overly contrived. Then, because Danielle has yet to join our cult (& because heck, we'll all rewatch it happily no matter what excuse we have) we put on the Doctor Who episode with the first appearance of the Eleventh Doctor & Amy Pond-- "Eleventh Hour." It is funny to re-watch, because Matt Smith just...grows into the role so completely, & he seems almost tentative here. & you know, all the seeds are scattered about. The Pandorica will open! Silence will fall! He calls the TARDIS sexy! We were drinking wine-- white & red-- & the Lagunitas Sucks Holiday Ale Brown Shugga' Substitute, which was great! I mean, really good. Apparently they didn't have the brewing capacity to make their Brown Shugga Ale, which I haven't had, but if this is what they make to try to make up for it, it must be pretty good. The Substitute was like, half barleywine & half caramel malt-- we all liked it a lot, & it probably contributed to us talking about whether or not The Doctor was better than Santa Claus for like, thirty minutes.
Collapse