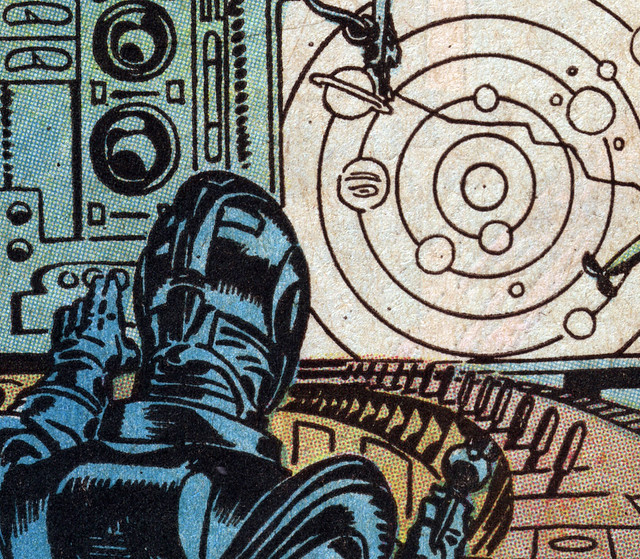 I want Reed Richards to be like, so smart he's useless. I want him to be working on elegant mathematical & theoretical structures that in five hundred years will be relevant, but don't have practical application. "Reed Richards announces his discovery of a mathematical proof for the Richards Paradox, a mathematical equation first described by Reed Richards six months ago" followed by T'Challa just being all "I don't really understand it, but the math works out. I guess it is solved?" I want him to be elaborating discoveries that don't have any bearing on the mainstream Earth-616 Marvel universe. "Toward a Descriptive Understanding of Multi-Universal Phoenix Force Events" or "On the Hermetic Elements Present in the Galactus-Type Power Cosmic." I want his notable inventions to be indescribable. Tony Stark all "well, we were talking about the Negative Zone & Reed said 'you know how multidimensional theories often posit the smaller dimensions being curled up inside each other on subatomic levels?' & I told him yeah, I know about that, I used M-theory IIB strings in my repulsor beams, & he was like 'well the Negative Zone is just like that, but bigger, & sideways, & Anihilus lives there.' So he kind of lost me." & I really like the idea that Reed Richards is rich because every so often he takes off an evening & invents something for commercial use. I don't know where I read it, but there was a joke in a comic once where they found out Reed Richards invented velcro, & I was like "yeah, that is perfect, absolutely."

There is a part of Twin Peaks where an Air Force Colonel says "Garland Briggs is the best pilot I've ever known. He was born with hardware most of us only dream of having." I want people to say that about Ben Grimm. I think Ben Grimm is the greatest pilot in the Marvel Universe, & I think it should come up more often. When the Fantastic Four sneak onto Taa Two, it should be Ben Grimm who understands the ship, since he just has a deep & abiding understanding of ships. I think Ben Grimm-- while still being a lunk & a lovable lummox-- should have a brain wired for spatial understanding that defies most human abilities. He should have no problem juggling zero-g directionlessness, or multiple moving points of reference-- the same way that a baseball player can hit a fastball without doing calculus, Ben Grimm should be able to handle the mass vectors of faster than light space travel. & I don't think he should have to breath. & for that matter I think he should be able to eat anything. The cosmic rays should have made him the ultimate astronaut; able to withstand massive acceleration forces, to live in any environment, to work in the vaccuum of space. To be able to fight any predators he might encounter on strange alien worlds.
Collapse