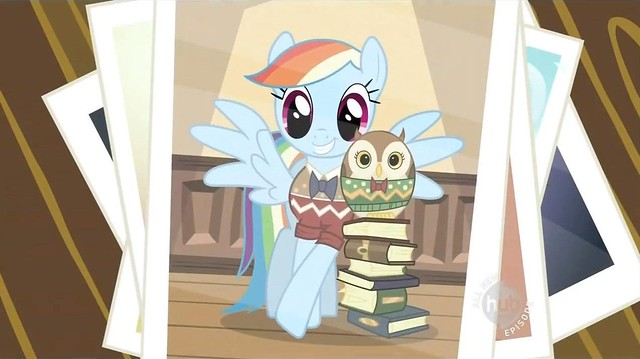 In the Hyperion Cantos, a cybrid is the term for a synthetic humanoid embodiment of an artificial intelligence. They can be aspects of a larger AI or research projects-- there are a couple of Keats clones, a Frank Lloyd Wright, heck, they even mention a Jesus cybrid. So that is one strain influencing my dream last night, as I helped a family of cybrids escape a hostile planet, sneaking them under the belly of a wooden roller coaster. They were all one AI's worth-- one was the executive decision making protocols, one was the library of data, another was the intrusion programs & counter-measures...in essence, the hacker cybrid. Of course, the fact of the matter was that these cybrids weren't humanoid, but rather took the form of unicorns is probably directly attributable to watching My Little Pony: Friendship is Magic. That is the other half of the double helix. So yeah, I had dreams about cylon unicorns, so I feel pretty okay about myself. Coupled with the fact that they kicked me out of the gym last night because I just wouldn't leave-- well, it was an okay evening, is what I'm saying.

The daytime, on the other hand, which pitch-black lazybones. I actually sort of need a weekend, & this vacation coming up next week ought to be handy, too. I'm hollow, filled with fading wil o' wisps! Where is the kirby crackle of black dots? First thing, Jenny made some French toast; she didn't like the wheat bread, said it was too dense, but dense blocks of calories are my scene, daddy-o. I watched the "My the Best Pet Win" episode of My Little Pony which was a good example of the show in top form, plus had the above picture of Rainbow Dash posing in a sweater & bow-tie with an owl who is also in a sweater & a bow-tie which might be the cutest thing I've ever seen in my life. From there, my day was sort of like this, as I fell down the Scribblenauts: Remix hole for a while. You know, that game with the famous review "I FUCKING TRAVELED THROUGH TIME AND JUMPED ON A DINOSAUR AND USED IT TO KILL MOTHERFUCKING ROBOT ZOMBIES." It is a sandbox game that really shows where casual games are going; at ninety-nine cents for the iOS, you can't really go wrong.

The rest of my life? Well, I gained a level in GoldenEye but didn't unlock a new gun, which is sad. I went to the gym, as I mentioned, & closed it out; I'm going to go again today. Jenny was out with a friend, but when she came home she brought a few beers & we had a tasting while we watched The Daily Show. Clown Shoes Clementine White Ale was an alright little white, pretty much a summer beer so we're out of season, but Clown Shoes American Black Ale Lubrication was nice. I wonder if they use the same hops? It had a similar citrus to it, under the burnt oil of it all. Both Jenny & I thought it was missing something on the back end. I think a lot of porters & stouts are, actually, which is why I like things that have been aged in a barrel of something or other, like the Goose Island Bourbon County Stout. An apparent alcohol or some kind of smoke on the finish helps them out. The Abita Turbodog that we finished up with was a weird little guy. I don't usually like "brown" beers but this one had enough stuff going on to make up for it. It was pretty busy, with the malts & the fruits & the chocolates-- a lot of layers going on.
Collapse