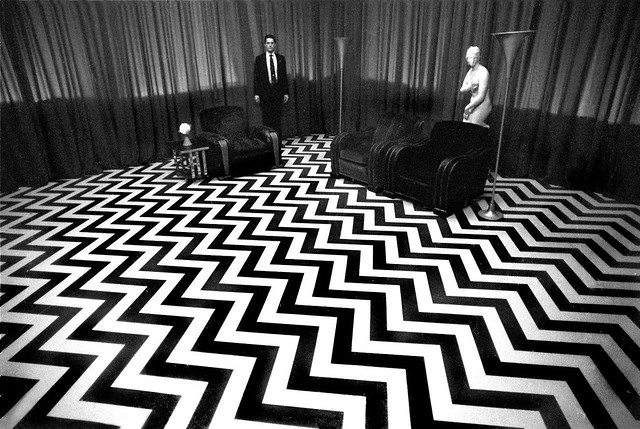 Let me see, I don't know. Consider this a placeholder, a thumb in the pages. Let me start by saying: there are few things I loathe more than a leafblower. It is the symbol of all I hate in humankind. The idea that you will blow your trash into the street, & that somehow counts as effective, as okay, as a possible rational & ethical solution to your garbage problem? Argh, I hate it so much. I see an old man blowing all the litter around a church into the street, into the stormdrain, every morning. I hate you, you stupid idiot ostrich, you grotesque irrational legacy of arboreal life. You live in a web, get hip to it. There isn't an "outside." Anyhow, let me see here, let me see. After the gym on Saturday I got all gussied up in a black ribbon, Jenny wove herself a bow-tie of red ribbon (bow-ties are cool) & we went to Amy's birthday party & her & Omry's apartment. A lovely time was had by all, I think, but I drank more than I meant to & then I got the worst hiccups ever. I mean, straight up out of the Book of Revelation, hideous croaks torn from my throat. That is in there, look it up. So bad, I had to sleep on the couch, & failed, utterly failed, at restfulness.

Sunday was nice! Or what part of it I wasn't a half-baked Frankenstein Monster for. I ran Oubliette, & featured Bernie as a guest star. The lack of hydration & sleep were telling though; I didn't think I was up to snuff. Folks had fun though, I think. We're a bunch of post-humans; I've got a metal skull, Tracey has a dead guy's knee now, & Sam's back has radiation burns! Living in the future, you can't stop yourself from falling. & then that night, I had terrible stress dreams...about a Power Point presentation...about Bernie's character sheet? Just toggling back & forth. Thanks brain. You're a real pal. I woke up eventually & was like "well, I will just get up early, then," only to find out that it was just thirty minutes after midnight. Awful. So I slept rugged last night, too. Today was fine; Power Point in real life, for a change. Terra & I went to go eat dumbledores with James, & then after work she came over to gulp down two episodes of Twin Peaks. Windom Earle has finally reared his head, & we got to see the Major in the Garden Throne Amidst the Fire. Great stuff. Jenny got into bed shortly after we arrived & hasn't left it since, so I haven't been the only one sleeping poorly, I guess.
Collapse