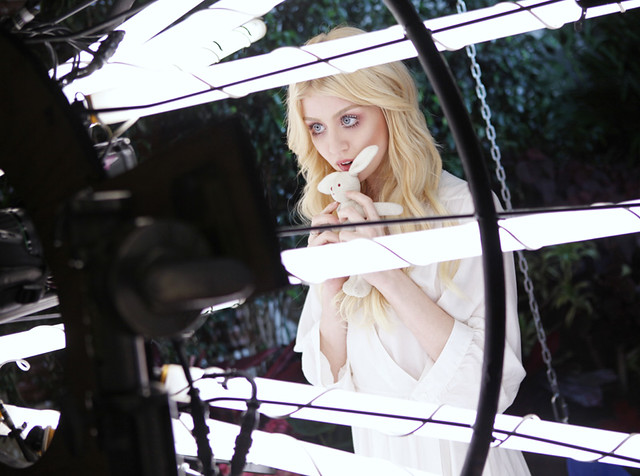 So, last night's America's Next Top Model All-Stars was pretty wonderful. The cycle had been teetering on "boring" since the start, but as I predicted, now that they've cut away some of the chaff they can start building narratives. Particularly, the Creepy-Chan "struggle to victory" story that we all deserve. I'm sorry Laura, you are adorable, & I know this same thing happened when it was down to you versus Nicole, but everybody better recognize: Allison. The episode was really just fantastic fun-- the chemistry between The Game & Allison was particularly great, as we the sheer ridiculousness of "Pot Ledom." Allison's music video, "Underwater", was a clear home run-- yeah, you go all Polly Jean Harvey, run that game. No pun intended. Pure unadulterated success. Television Night was going fast & furious by that time; beer, cheap wine & candy galore. Lots of reminiscing about high school-- not like, nostalgic retreads of the past, but rather just talking about levels of violence & alienation, stuff like that. A survey of childhoods! Complete with photos, in Jenny's case. The gang was all there-- I got home first, & then

fatbutts came over with her dog Archie. Archie was being rowdy, so I sort of had to hang out in robotland while Lilly disciplined him, & then Jenny got home from her missions, followed shortly by

elladorian. James showed up, oh, about three quarters of the way through us re-watching the Doctor Who episode "The Lodger", which we didn't even finish. Too eager to press on into the depths of Top Model, though I think we were well rewarded.

War for the Garden.
Bloody angels with bright swords,
the Shrike among them.

I don't talk about it, but I have a couple of big monolithic archetypes that surface in my dreams at crucial & formative times. One of them is the Harlequin, the man who laughs, the tin soldier...& another is what I call Wire Mother. It isn't a far toss from Wire Mother to the Shrike, so as you can imagine, I found the Shrike to be one of the more compelling things I'd read about recently. The Ousters also pinged with something deep in my heart, but simply because I've come up with something similar using my own imagination; I don't think it is too hard to see the same ideas in the Homoculi in my roleplaying setting, Oubliette. Or in the Spacers of Blue Planet for that matter. Prehensile feet just make sense in zero gravity, & it isn't hard to get to "prehensile tail, too!" from there, either. My first impression was that James was right when he compared it to Gene Wolfe-- his recommendation, along with Cortney's enthusiastic championing of this back in college &

primroseport's admiration of Simmons is why I finally read it. The first section of it read very much like The Fifth Head of Cerberus, but that soon gave way to comparisons to Gibson, to Chandler, even Danielewski's house in the Labyrinths & as the Time Tomb closed around Rachel...& then eventually it was clear-- the nearest analog was Chaucer & his Canterbury Tales. Pilgrims on their way, telling stories to keep the dark at bay. The stories topple into each other like dominoes, a bloodbath as Chekhov's Gun fires again & again-- flying carpets & Shrike bishops & Keats-- the curlicues of the narrative bent in on itself, Mandelbrot.
Collapse