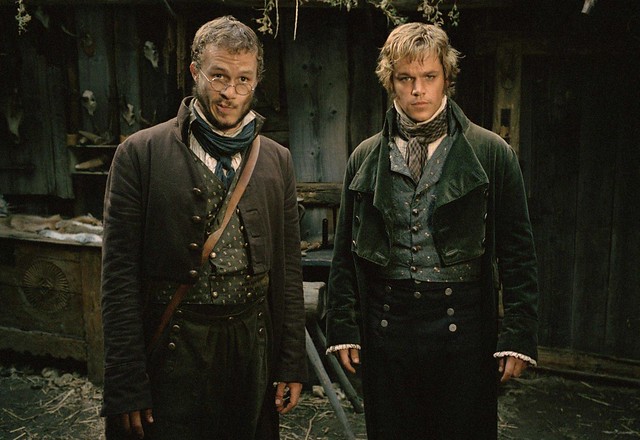 So the same way that Once Upon a Time is trying to get some marketshare on the post-Fables headspace of America? Same thing with Grimm, only with the guy who made Angel in charge. It'd been billed as being made by Buffy alums, which only made me think of Marti Noxon, which left a bad taste in my mouth, since I am the enemy of the two seasons she was the show runner for. Instead, it is David Greenwalt, so hey! Even though Grimm wasn't very good, maybe it will be good after the first season, like Angel? The "big bad wolf" sidekick is vibing very "Doyle" to me, but maybe he'll subvert it? Here is the problem with Grimm in a nutshell-- the opening sequence. We see a girl in a red hoodie going jogging...& then getting attacked. Sorry, you lose right there. We're in a post-Buffy world, now. The unsuspecting girl suddenly attacked by supernatural forces in the cold open? Yeah, remember how Buffy blew that trope wide open & turned it in on itself? Sorry, going backwards to "supernatural creatures menace heroes, & the menfolk come to the rescue!" doesn't fly. It is tired & expected. Making the girlfriend a non-character? Doesn't help. It seems to me that Greenwalt intends to follow through on the themes of the back-half of Angel-- demons as metaphors for assimilating immigrants-- but I don't know if the show can dig itself out of the hole that the premise dug for it, you know? & I really like "Red Riding Hood & the Werewolf" stories, even bad ones! Oh well.

There really hasn't been much else going on, thank heavens! Friday was a mess of work & then home to...go to the gym for an hour & ten minutes & then knock back some wine with Jenny & watch Grimm, like I said. & then yesterday was very lazy all during the day-- reading, video games, that kind of thing. I cooked eggs for breakfast, Jenny made chicken & greens for a late lunch or early supper. Outside, the rain turned to snow, a gross sort of slush, & I said it made me wish I had a raincoat. I felt like Anthony Kiedis, you know? "Sometimes I feel like I don't have a parka..." Jenny didn't appreciate that pun at all. She's so spoiled. I cut my hair, which is long since over due-- I said I was letting it get unruly until I thought of something interesting to do for Halloween but the truth is that I just procrastinated on cutting it. The clippers were making a hideous humming, acting like they were on their last legs, & no amount of fine-tuning would calm them...but I cracked open the case & fiddled with the electromagnet & then it started working just fine. Call me Grey Hulk. Then, after I showered & lazed around a little bit more, it was off to the gym, where I knocked back an hour & fifty-five minutes. Time flies when you are getting supremely jacked. So swoll! No, it was actually a decent workout, with lots of cardio-breaks. Maybe I'll even go again today, try for a turkey!
Collapse