The Metropolis of Tomorrow by Hugh Ferriss.

Buildings like crystals.
Walls of translucent glass.
Sheer glass blocks sheathing a steel grill.
No Gothic branch: no Acanthus leaf: no recollection of the plant world.
A mineral kingdom.
Gleaming stalgmites.
Forms as cold as ice.
Mathematics.
Night in the Science Zone.

I'll let Hugh Ferris, above, speak for himself. I've been a big fan of Ferris, using him to illustrate my Oubliette game & even using his work on the cover of my NaNoWriMo novel Watchtower Gothic. What is there to add? It is tricky, because Hugh Ferriss is a dangerous wizard, subtle & quick to anger. He chants out in 1929, & we the magicians hear his utterances now, & forever, amen. The Metropolis of Tomorrow is split into three parts-- the first, where he discusses actual buildings, circa the late Twenties, the second, where he extrapolates from style & zoning laws, & the third, where he just cuts loose & gets utopian about the future. The Science Zone! The Center for Philosophy! Bring it on! I'm quite glad that Dover keeps things like this book alive & in circulation. Ferris ends with a rendition of an inscription he claims he found many years ago: "THE CITY COULD BE MADE IN THE IMAGE OF MAN WHO IS MADE IN THE IMAGE OF" but the last bit of the message is obscured. 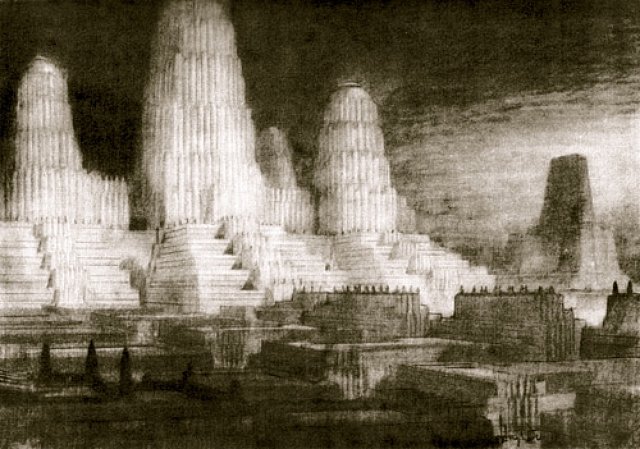 The One Trick Rip-Off by Paul Pope.

Oh so this is the kind of stuff David Lapham's Stray Bullets is supposed to be like. Or what Brian Azzarello was shooting for with 100 Bullets. Or I guess anybody else with a comic that has "bullets" in the name. I guess they were all writing this stuff in the mid- to late-Nineties. Now, I'm not an unqualified consumer of Pope-- well, his writing, because obviously his art is alway pretty incredible-- & I almost always hate crime fiction, but I thought this was pretty great. It had a few key hooks-- like likable but stupid protagonists-- that I think are missing from a lot of the crime genre. It wasn't relently gloom & feel-bad drama, either-- another hallmark of the criminal thrillers, I find, is the creeping banalatity of awfulnuss. A monotonous dirge of one bad thing after the next. Oh, & then there is the fact that the eponymous "one trick" is pretty fun, & is seamlessly integrated with the narrative without a sloppy exposition about it being shoe horned in. So yeah, I had fun with this; the art is kinetic, the story moves, & it takes a few unexpected turns & twists. Not to mention, the introduction made me think of Massive Attack & Tricky, & so I've been listening to trip-hope all day & feeling somewhat nostalgic for the turn of the millenium. 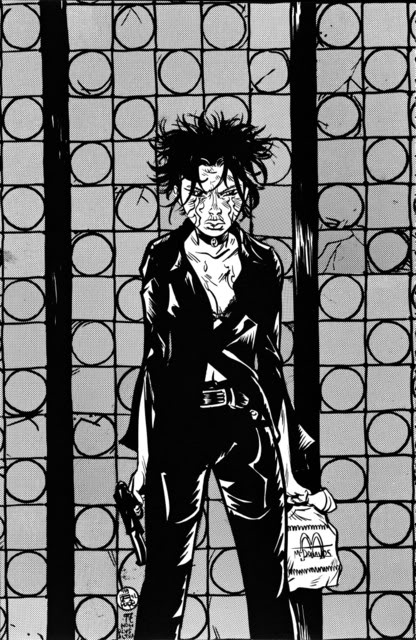 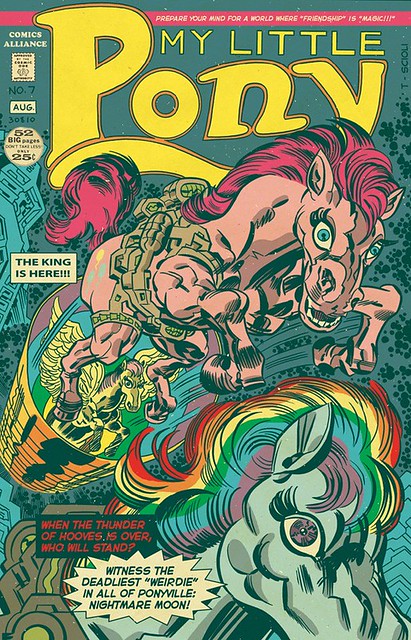 After watching Twin Peaks I went into the bedroom & saw a pile of my clothes on the bed. I was confused! I also hadn't had enough room in my closet for the shirt I was hanging back up-- what gives? It turns out, Jenny-mouse did the laundry! A quick load, you know, all smart & before it swelled up to become a blackbody eclipse. She's a nice wife, that one. Then on Wednesday, she cooked up this Moroccan stew, a tajine-- & I helped! Well, I rolled the meatballs & I made the couscous. Then she bailed to go learn about tax stuff, as she slipped out the door,

fatbutts & her dog Archie rolled in, followed in short order by

elladorian. & in fact, even more eventually, Jenny, when she came back. First things first: My Little Pony: Friendship is Magic. Lilly was curious what all the fuss was about! We watched the first episodes, where Nightmare Moon is established, & then looped around to the Halloween episode with Princess Luna trying to get back to having a normal life. I think I won over Maggie more than Lilly-- but Lilly also didn't really have the amazing time at Sleep No More that I had, so our chemistry is clearly off lately. I knew I should have told her more about it; my theory is that she was overthinking it. The grape & the grain were flowing, & when Jenny came back we tried to watch America's Next Top Model All-Stars, but the DVR just wasn't cooperating. We only ended up seeing the last half-- & the photos were rubbish. I don't blame the models; I blame the photographer, for not behind any good. Also, the uh, "Snookie & Nene" concept was...not very good. It was...not very good, & then they kicked off Bianca! & somebody else, but Bianca! She's way better than...most of the others! I guess she was super annoying in the part of the episode we missed? But still, keeping Sharon & not Bianca-- in her cute short skirt!-- is crazy. Kayla, fine, but her time is past. At least Creepy-Chan is still kicking it. Team Allison. Oh & then! Antonio was at a convention & saw this picture (by Victor Castro Junior & Jeff Balke) of the Joker dressed as Superman, & of course he thought of me, so he sent it! New cubicle art! 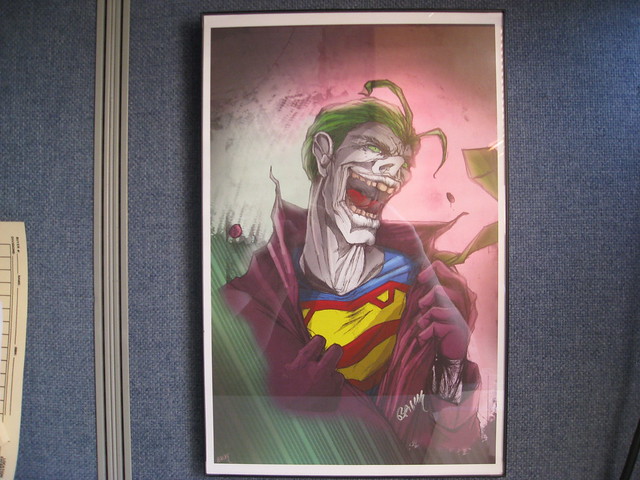