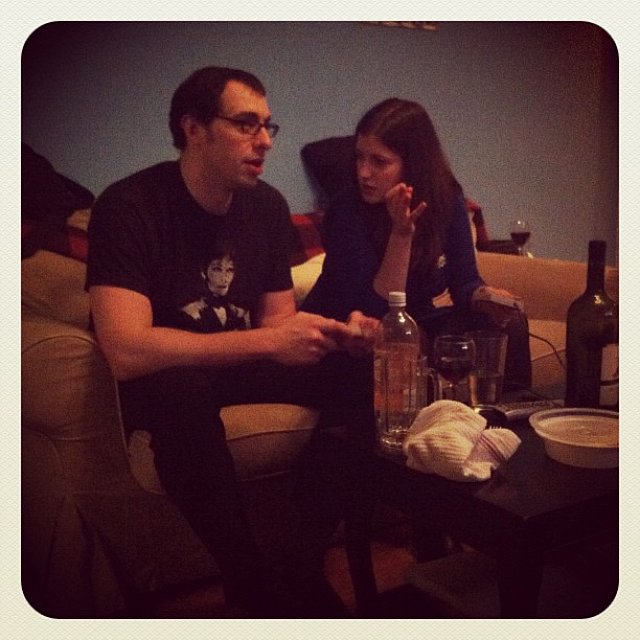 Day of collating & stapling at the office. It isn't so mindless as it sounds. Lunch journey to Vanessa's Dumpling House with Terra, after Cherise showed me the joint in the first place on Friday. Which-- I never mentioned it, but Monday & all last week was a nest of power lunching with

onatopofthings & Terra, just all up & down the Flatiron District. After work today, all of a sudden I was late to the party! Over to Matt's to meet up with (in order of appearance) Jocelyn, Brian, Kat & last but not least, Jenny! Last in order of appearance, but first in order of favorites. Hanging out in Hell's Kitchen, playing a bunch of Mario 3-- or at least, watching Jocelyn dominate it-- with one adventure outside to pick up another bottle of wine & some Thai food. & that is the facts! & then a long train ride home. I was going to go to the gym, but with the suddenness of a man jumping on a grenade to save his comrades, boom! It was party time! Wait, is that the right metaphor?

Morning reveille:
"The owls are not what they seem."
Diane, take a note.

The gloss effects on this cover are really spectacular. Maybe it is the couple of bennies that Kelly dosed me with-- no, Benadryl, not Bendedrine!-- but ohhh, pretty sparkles! The creepy eyes of the campers, the talon made from a flock of birds, the highlighting on the protagonists-- just, bravo. The story inside won't hold very many surprises-- outsiders struggling with conformity, a romance between a thug & a nerd, bodies changing with the onset of puberty, bird-aliens growing in your brain. The usual stuff. Wait what? Anyhow, I think the thing that makes this book seperate from the pack of "our changing bodies" graphic novels is the matter of fact way that the characters deel with the hurdles of adolescence. Wet dream? Great, now you have to change your underwear without your bunk mates catching you. Your first period? Ugh, where does this horrid camp keep their hygene products? The character design is lovely, as well-- I'm always curious about that, since I sort of feel that a hallmark of cartooning is how you choose to differentiate your characters. This is a nice little yarn-- I could relate to it on a personal level a little more than American Born Chinese but not quite as much as Americus.
Collapse