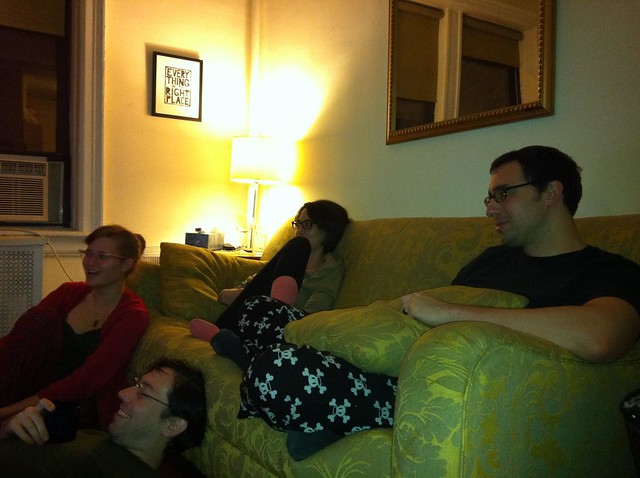 (Widdershins from the top: me, Jenny,

On the topic of last night's America's Next Top Model All-Stars, I can tell you one thing: Bre was robbed! Hold on, I am getting ahead of myself. You can see the group above-- sans Ryan, who took the photo, & sans

fatbutts & James, who couldn't make it-- but you can't see what we were drinking. Apparently everyone recorded it in their ultra high-tech phone applications, which they've been keeping secret until now? Ryan brought a big growler of BFM/Terrapin Spike & Jerome’s which sure was odd; a little bit sour, a little bit cask! A little bit country, a little bit rock & roll. David & Maggie brought some Fire Island Pumpkin Barrel-- another entry into the seasonal category that didn't knock my socks off-- & there was still a tall bottle of Heavy Seas Great Pumpkin from last Television Night. I still preferred the Southern Tier Pumking-- I brought up the conflict over beer snobs who hate pumpkin beer &...well, & everyone else? & I feel like there is a perfectly reasonable middle ground, where you acknowledge that pumpkin beers lack subtly & sophistication, but they are still awesome. Anyhow, Pumking is utterly lacking in savoir-faire, but it has an earnest, in your face charm in its place. Before that, Jenny had cooked up some steak & brussel's sprouts, & we'd cracked open a cheap bottle of wine. So yeah, the fruit of Bacchus & the milk of Hathor were flowing. We started off with "The Satan Pit," a Tenth Doctor episode of Doctor Who. I guess I never did talk about "The Impossible Planet," either, the first part of the pairing. Good stuff! I'm starting to pick up the charms of the show, though I'm still not sold on the earlier series. Might take a bit more. The special effects are put to better use here; the Ood are great, the off-hand comparison of the space station to flatpack furniture helps explain its "BBC Budget"-looking appearance, & the CGI on The Beast was surprisingly skillful. Which isn't meant to be a backhanded compliment-- heck, I'd be impressed in 2011 if someone managed to make a giant satanic monster that didn't look like it was from a video game. Top Model...well, Top Model was a disaster, but finally a disaster worth yelling at the television about. It started with the Kardashians & a circus carousel. I'm not a big Kardashian hater, but fashion isn't the angle where I think their talents lie. On the flip-side, a client is a client! The gyre of the carousel was crazy, spinning too fast to be used properly, so everyone sort of skidded out. The final photo shoot was-- Michael Jackson themed! Featuring, for whatever reason, La Toya. Heck, I've already sloppily MSPaint 'shopped Michael Jackson into Top Model photos, so bring it on! Sadly, none of the shoots were a Captain Eo costume. The final analysis is this: Bre Scullark dominated that shoot, & the picture they picked for Bianca was a bad representation of her shoot, methinks. Still, Bianca is being painted in a weird way-- this time I actually think she's not the worst, though good heavens she is still a disaster. As a person, I mean. You can see her reputation getting her into trouble, & you can see the other girls happily scapegoating her. I wonder if it is for just generic "drama" or if it is going to be a bigger arc. Allison-- our wonderful Creepy-Chan, who somehow David had missed was a meme-- did fine, but her costume didn't demand much from her. Who ended up winning? Laura, maybe? Her shot was fine, but Bre's was better. & Bre was called near the bottom! & then La Toya decided they wouldn't send anyone home, which-- come on, kick Lisa off, please! Next week: Coco Rocha! Eek!

Huckster Cthulhu:
"Fhtagn, Ladies & germs!"
His wares are your souls.

From time to time,

onatopofthings will run across a piece of gaming's nooks & crannies, & send it on to me. Last time it was something I hadn't ever heard of-- Corum a roleplaying game companion to the Elric game...which I also hadn't ever heard of. Rifts on the other hand, is a whole 'nother animal. I'm passing familiar with Palladium of course. I spent my childhood & early teen years playing oddles of TMNT & Other Strangeness-- Spike Q. Seta the mutant porcupine assassin, Bob Gaborgee the mutant Green & Gold Bell Frog jackeroo in Mutants Down Under-- & I own most of the Robotech books-- for the original three series, anyway, & the Sentinals. & yeah, I played some Rifts-- who hasn't? Even the last couple of presidents have copped to doing coke, so I figure it is okay to admit I played Rifts. We all did. & that is what Rifts is like-- cocaine. Take a high tech futuristic setting. Then apply apocalypse. Don't stop there! The apocalypse opens dimensional rifts, bringing monsters & aliens into play. You aren't finished yet! Add in dimensions that go to the places from human myth-- faeries, demons, dinosaurs, whatever. A multiverse, all crammed into Earth! Of course, magic starts working! & always had! Ley lines! Cyborgs! Psychics! Mecha! Whatever you want! Play a dragon, sure! A cyborg Jedi, no problem! A guy on super-steroids? That is a base character class!

I used to be of the opinion that the "Coalition game" was the only viable way of approaching the huge clusterfuck that is Rifts. See, the Coalition are the humans-only fascists of the setting-- a bunch of guys who think that the Nazi's costume design was too restrained. They go full on Warhammer 40,000 with skulls. Their armor has skulls. Their mecha have skulls. Their robots are shaped like skulls. Their soldiers are called "Deadboys." The Coalition hate...aliens, monsters, magic, psychics, anything like that. Which makes them both the scary bad guys to supernatural characters-- that is, most characters-- but also the "good" guys when there is a dimensional incursion by Cthulhu-minds or vampires or satanic armies or what have you. The Coalition is the one part of Rifts that makes some kind of sense-- they aren't "everything & the kitchen sink" like the rest of the setting. Rather, they are the guys who go: "only the kitchen sink, the hell with everything else." It provides a framework for narrative, letting you play psychics on the run (a favorite campaign pitch), a platoon of soldiers, psychic hunters & mutant dogs-- in Palladium, the humans always think mutant dogs are okay, which is a funny quirk-- who start to question their "kill 'em all" approach to the supernatural as they are confronted by less demonic aspects of it, a crew of people on the fringes of the Coalition territory eking out a life in the shadow of their military...whatever.

Atlantis is the one other setting I can imagine making sense. Certainly not the goofy "Tolkeen" utopia. Or alright, I could imagine the Vampire Kingdoms in Mexico, but beyond that, it is all Atlantis. See, the trick to Atlantis is-- commerce. Slavery, exotic locations, magic-- but commerce is what makes it all make sense. Like the Coalition, you need some kind of framework, some kind of paradigm, that makes all the nuts & bolts fit together. In Atlantis-- even if it isn't explictly clear to the players-- the answer is the Splurgorth. Heck, there is a "Splurgorth" on the cover of the main Rifts book, how much more essential can you get? The "Splurgorth" are initially billed as monstrous slavers-- which is true up to a point, even if the "Splurgorth" everyone sees are actually just minions of the Splurgorth. See, the real Splurgorth are puddles of tentacles, over a hundred feet in diameter, complete with gnashing mouths & a single hideous eye. They are, in a word, lovecraftian. & more to the point, they are interdimensional merchant princes. Cthulhu with a stock portfolio, a shoggoth with a knack for profit. Suddenly-- wham!-- it slams into place, & all the oddity hang together to make a complete picture. A crazy one, but a complete one.

Of course, the book is otherwise worthless. I mean, like most of Rifts it is just a lot of odds & ends, knicks & knacks, all grafted together. The Metztla-- the Murex Metztle, the Volute Metztla, the Murvolva Metztla, the Murmova Metztla, the Kreelong Carapace Metztla, the Kreewarr Carapace Metztla-- what the hell is all that? Fifty foot long aliens with thousands of MDC? Who is going to use all this? & they come as a bundle-- a Murex, Volute comes with 1d6+ Kreelong or Kreewarr & 1d4 Murvolva & hundreds of drones. What the heck? The Sunaj...are a dumb secret. Yeah, I kind of figured out instantly what their deal is, that is...that isn't a very good conspiracy! Tattoo magic & biowizardry...ah another collection of rules never to be seen again...unless they are cut n' pasted into another book as filler, that is. Tables of statistics, population breakdowns, geography details that don't illustrate or explain much of anything. & page after page of insanely detailed power armor by Newton Ewell-- actually, some of this stuff is kind of cool, in a "I dropped acid & put on a black metal album & started thinking about outerspace" kind of way. Which is maybe the best kind of way. The "Dragon Dreadnought" two-page spread is particularly breathtaking. 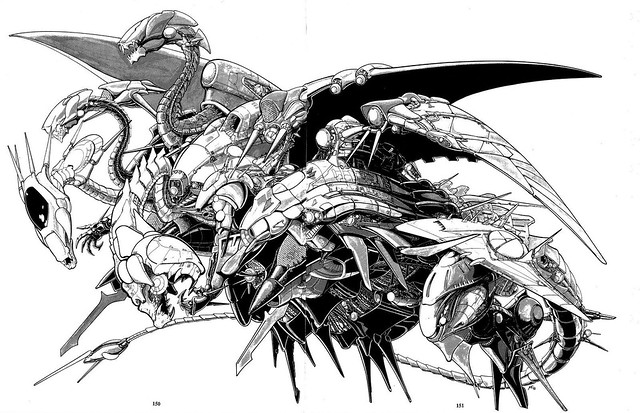 The best thing about other people going to see Sleep No More is that I get to remember my experiences seeing it as well as live vicariously through theirs. Now that I've seen it, I'm free to seek out "spoilers," & to talk about the various bits & pieces others have seen. To try to thread a story through the performance. This playbill is a helpful little tool; or rather, a fun piece of the puzzle. Then again, is puzzle the right term? Puzzle implies boundaries, edge pieces, corners-- shapes that fit together & a final goal that can be reached. Sleep No More is more organic than that, more fluid, more...unique, I guess? Still-- I have to say that having a chance to put names to faces is helpful, very helpful. Careena Melia, Gaberiel Forestieri, Elizabeth Romanski, Nick Atkinson, Sophie Bortolussi, Stephanie Eaton, Nicholas Bruder, Kelly Bartnik, Ching-I Chang, Isadora Wolfe...& you were there, & you were there...Kelly Bartnik & Ching-I Chang especially. Kelly Bartnik I recognize from the...subway! It was a mystery for a while, but now I'm pretty sure we used to take the train at the same time & share a car. Ching-I Chang was the nurse, but seeing that she plays the Sexy Witch intrigues me, since is it such a turn around. Gaberiel Forestieri & Nicholas Bruder are such...bookends to me. Cut from the same cloth. Really interesting. & that is the real attraction of this program-- it gives you hooks to hang your memory on, to pull from yourself things you might have forgotten. (Photos by Terra.)

Handing out the masks is like assigning seats in an auditorium. It establishes each individual as part of an audience, & creates a boundary between them & the action. THe masks create a sense of anonymity; they make the rest of the audience dissolve into generic, ghostly presences, so that each person can explore the space alone. They allow people to be more selfish & more voyeuristic than they might normally be. Hidden behind a fictional layer, they lose some of their inhibitions. It's an important part of the dreamlike world we are trying to create.--Felix Barrett. 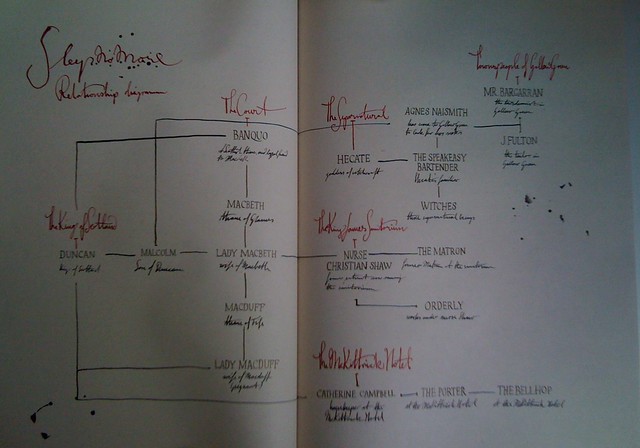