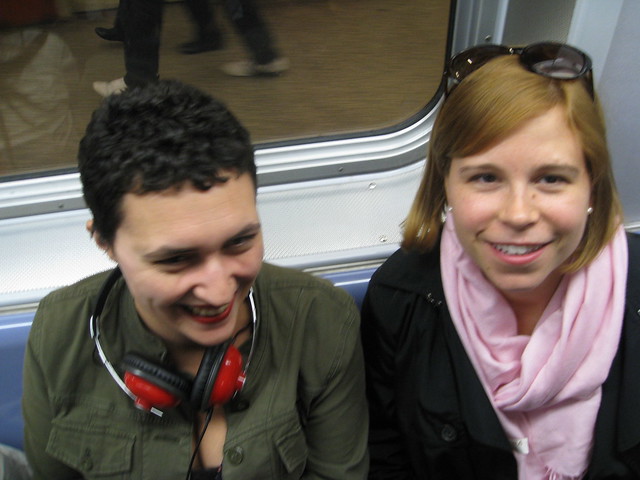 I didn't want to forget that I had my camera, so I started taking pictures immediately. This is Amber & Rachel as we were en route to Astoria. Amber was talking about how she was the "weird one" & the "smart one" at her new job, & I was talking about how one of the perks to Metropolis is that you can't always assume you are the smartest person in the room; I mean, growing up I pretty much could, but assuming that in Metropolis doesn't get you anywhere. I like being a big fish in a big pond way better than the same sized fish in a small pond. 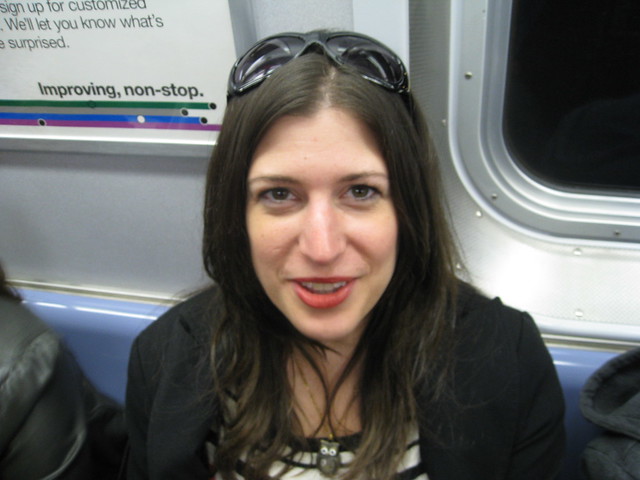 The birthday girl, Jocelyn, on the train. She was reading The Night Circus, & I was trying to figure out if it was any good, or all hype. That segued into talking about the over-hype around The Art of Fielding, which then translated to talking about Jonathan Strange & Mister Norrell. 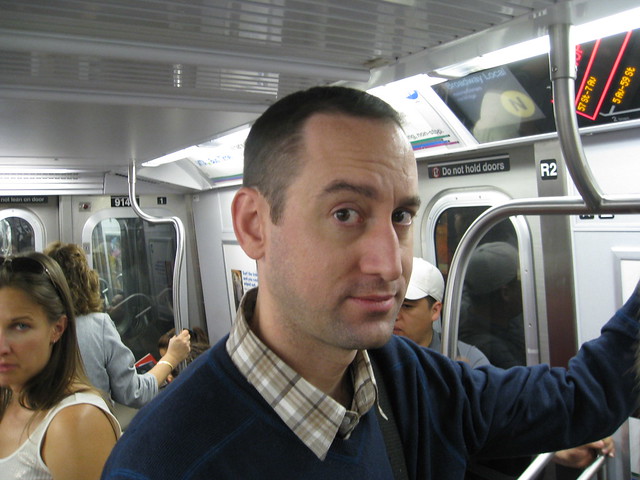 Both Jocelyn & Brian have Jonathan Strange & Mister Norrell in their Top Five novels, which I think is super fascinating. My favorite part is when Jonathan Strange takes drugs & sees all the Baba Yaga's hut carriages, & people whose faces are hollow masks with candles instead of brains. 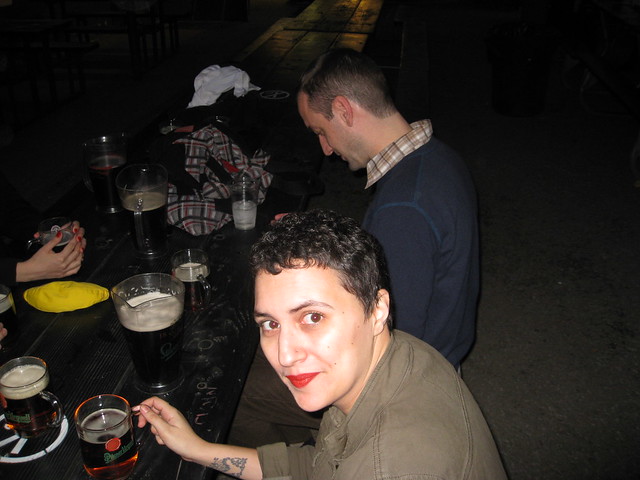 We stopped by Brian & Jocelyn's apartment for a couple of minutes, but eventually we made it to the beer garden. I hadn't been there since Jocelyn's birthday last year, & I had a lovely time there. The music was pretty hilarious-- I don't know what you call that sort of Top Forty Dance Tune genre, but it was out in full effect, punctuated by...sporadic country music? 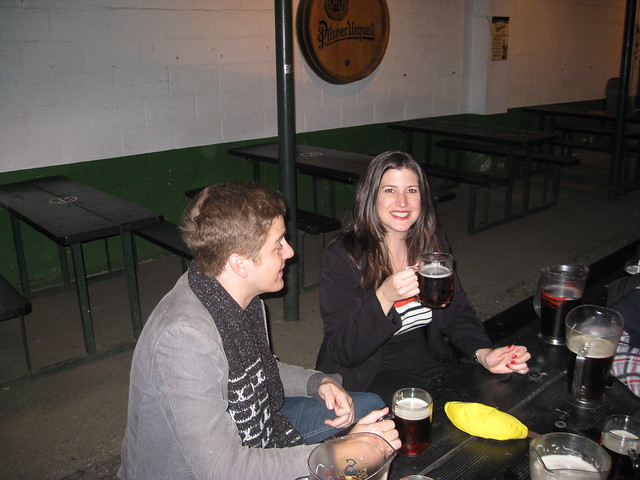 When we got there, Nick started dividing everybody up by whether or not they had been a Caesarean section birth, or a natural one. Of course I am in the former category-- which is important, because what if you need to kill Macbeth? You might have to; you can never be too sure & you only get one shot. A Caesarean section is a useful tool for the practicing magician. 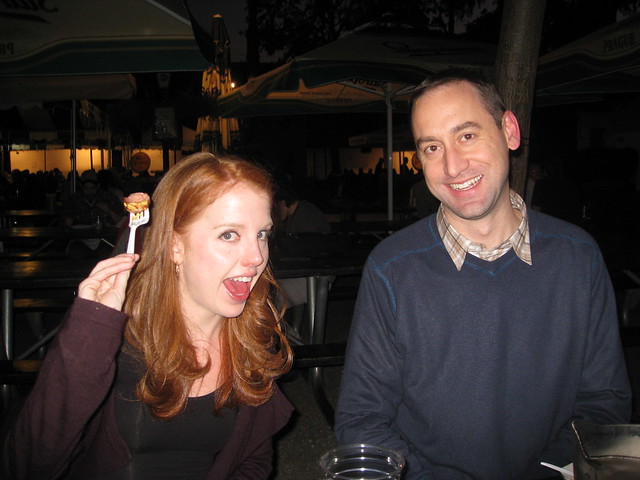 Kat arrived before too long, & is shown here eating a bite of kielbasa was mustard. I had managed to stretch my budget to include a pitcher of beer for the table & have enough for lunch, but sauerkraut is an extra dollar! Can you believe it? More fool me for tipping two bucks for the pitcher. What were you thinking, big spender? I had the country kielbasa, but Brian & Jocelyn got the spicy & cheese kielbasa, which was pretty lovely. When I went to Der Kommissar I figured out that käsekrainer sausages were my jam; I should have gone that route! 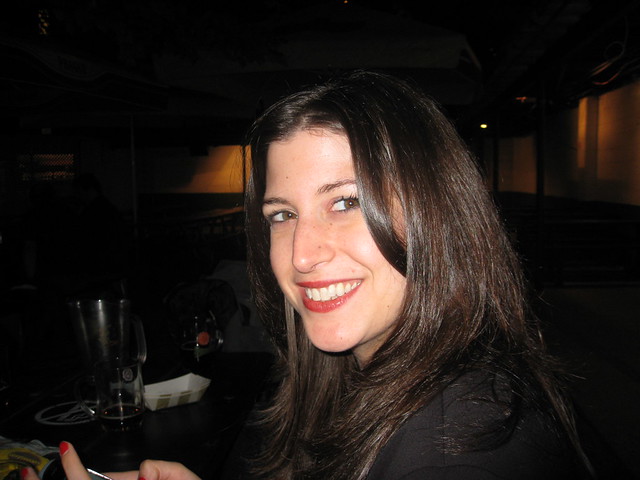 This is just a nice photo of Jocelyn. She photographs well! 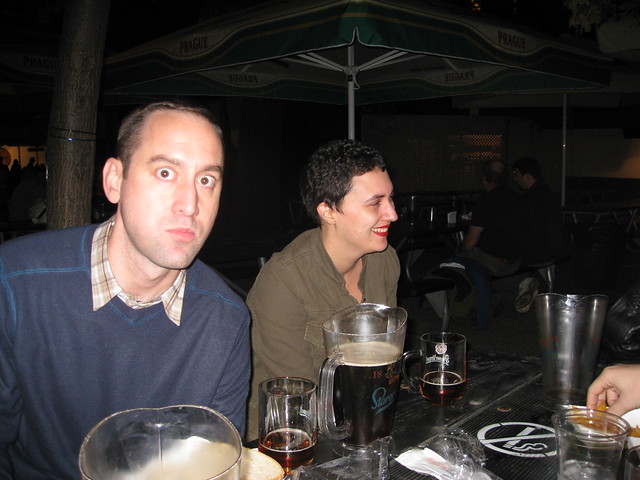 The greatest photo of Brian ever taken? It might just be. 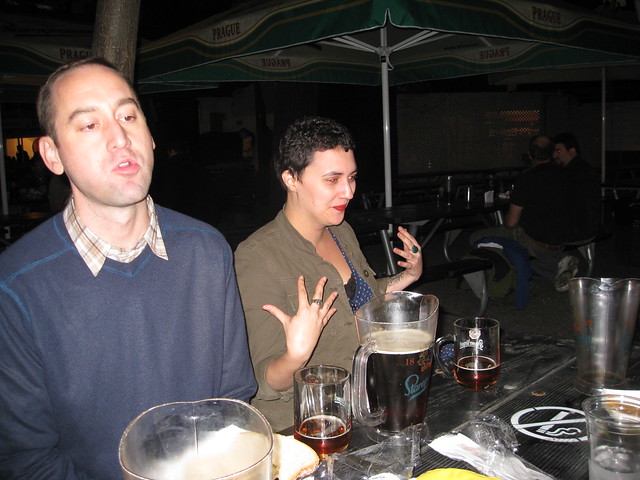 Amber was trying to express "abs" but it only came across as "boobs." I don't even know whose abs we were talking about. Maybe the guys from when we went to Boxers? I don't know, but oddly, Me & Jenny & Terra developed a mime for "The Situation" when we were got crabrolls, where we point at our stomachs & go "Ohhh!" in a New Jersey accent. 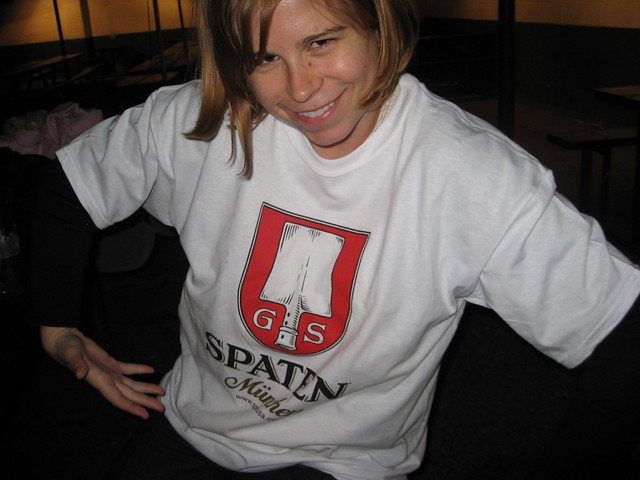 I got a t-shirt from Spaten when I bought a pitcher of their Spaten Oktoberfest beer, which I gave to Rachel. She promptly put it on & wore it for the duration of the evening, because she's a real sport. 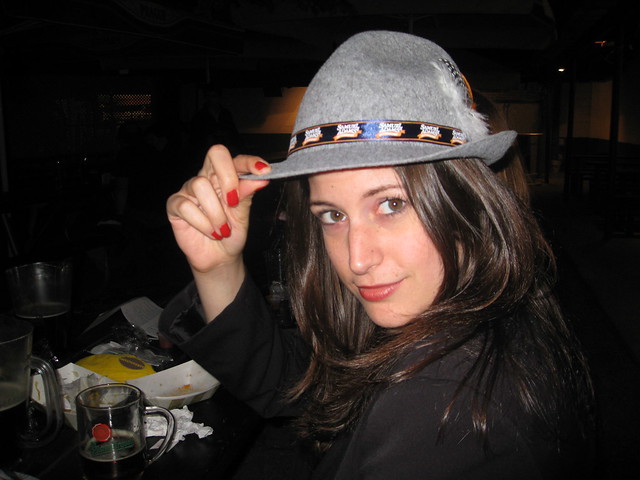 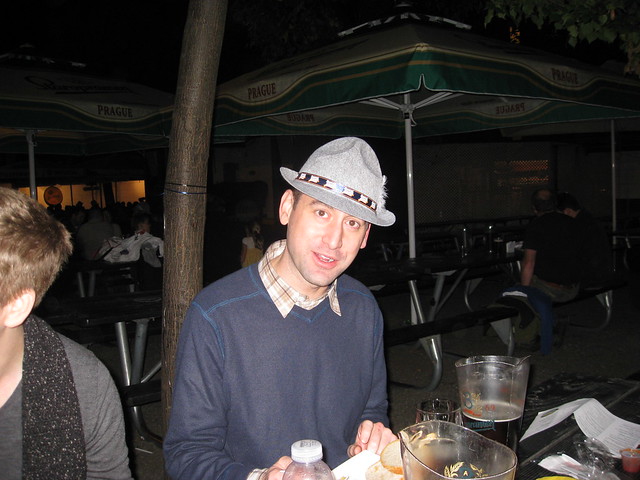 If you had ordered the Samuel Adams Oktoberfest pitcher of beer, you got a goofy little blue Tyrolean hat, which is basically the best crappy prize you could possibly want! If I had known before hand, I would have gone Sam Adams rather than Spaten. There was also a raffle, & Rachel actually paid attention to it-- but we didn't win anything, more's the pity. 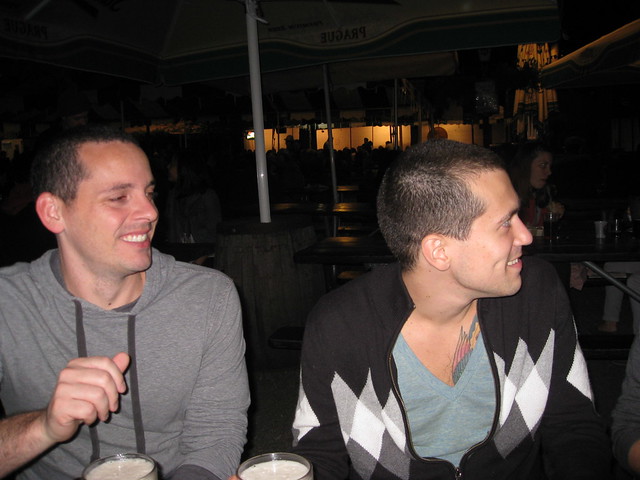 Ben brought his newlywed husband Rian, who I hadn't ever met, on account of how I never go to Queens. A few tentative forays proved that he was more than capable of keeping up with the depths of the deep dark nerding, which I assumed was the case. I liked him; we were down at the same end of the table for most of the evening. 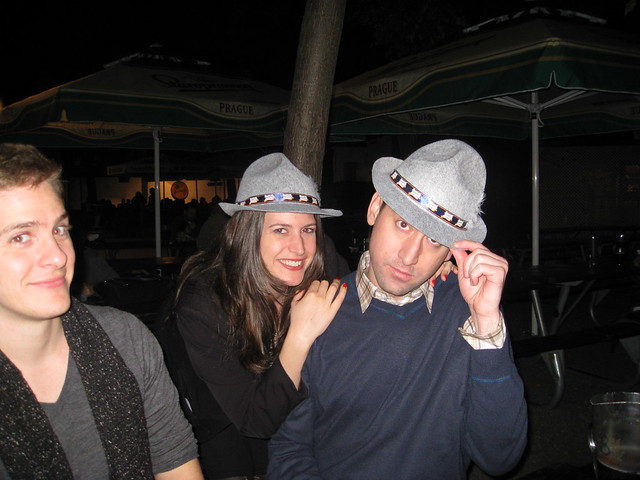 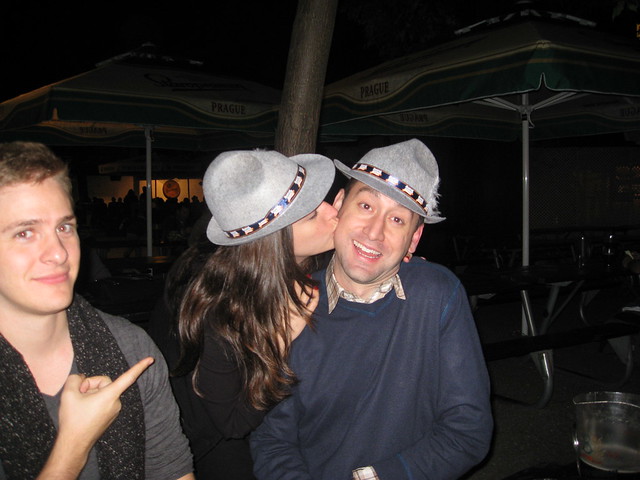 Seriously though, I was pretty jealous of the Tyrolean hats! Look at them, such a perfect blend of incredibly goofus & pure gallantry. 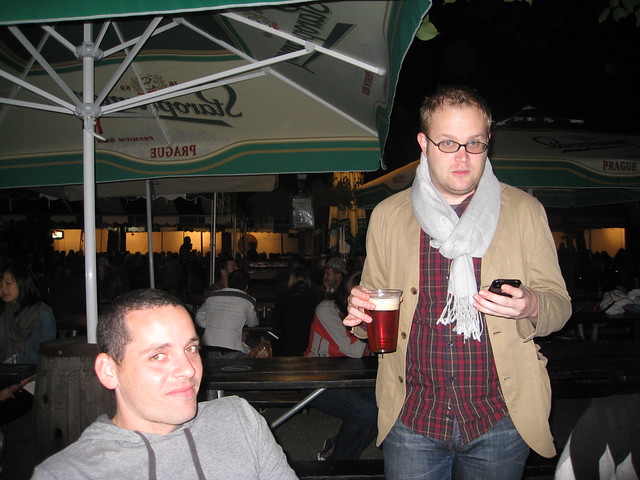 Loren showed up, as well. Loren is a wry wit! I'm pretty sure I'm on the sharp end of it in this picture, but I had my revenge by drinking some of their pitcher of beer. Who is laughing now, huh? 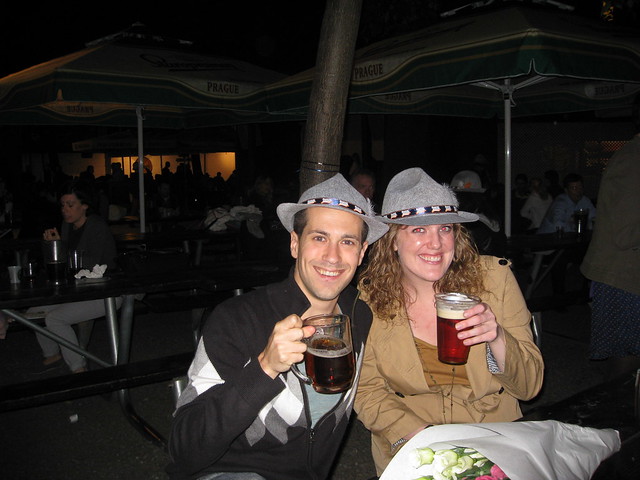 When did Maggie show up? She was down in the middle of the table-- when she arrived, things had gone from slowly growing, slowly absorbing more tables to a big landgrab. A bunch of Jocelyn's friends from her last job arrived, & so there was a lot of fresh blood in the water. Wait, now I am mixing metaphors. 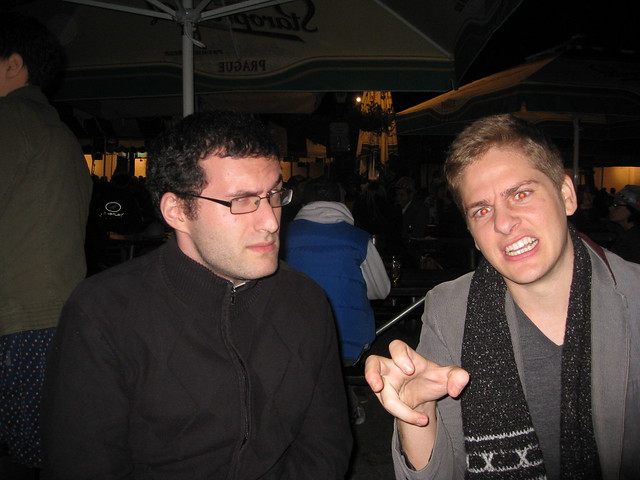 This picture of Dan & Nick pretty much sums up the contents of their souls... 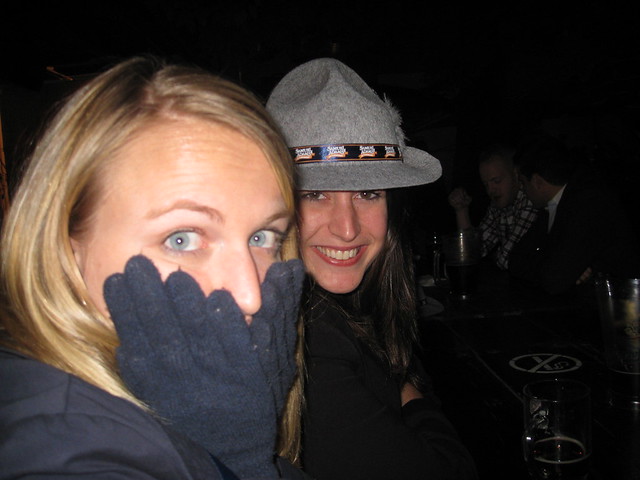 ...whereas Meredith is in no way as bashful as she is pretending to be here. 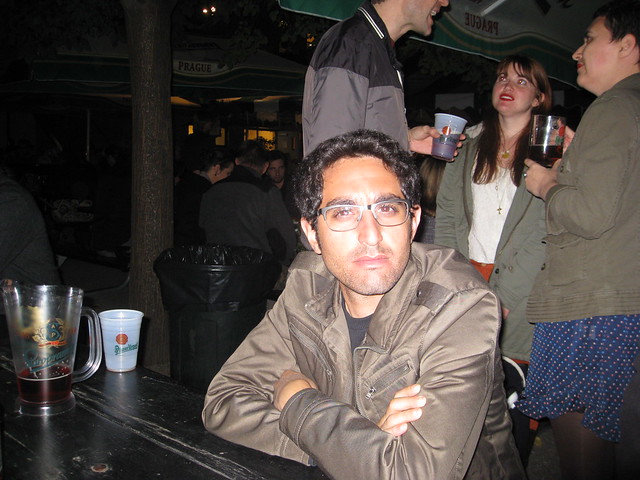 If Omry seems upset here, it is probably because I haven't hung out with him in like, six months. It might be that! You can see Autumn & Chris behind him; we spent a nice portion of the night talking about our experiences at Sleep No More, & I recounted my theories & the rumors & gossip I've heard. Also, I ate some of their fries. I've said before that Chris & Brian don't look that much alike, but this photo is proof that the bottom of their faces sure are similar. 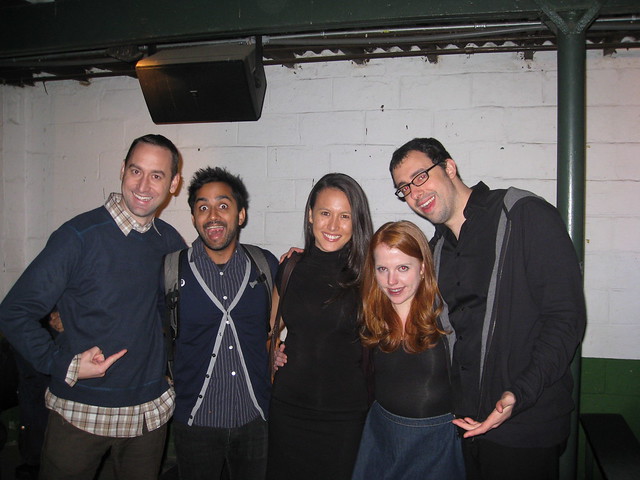 Brian, Sareen, Katie, Kat & me. A horribly unflattering picture of me. I ended up leaving in concert with Katie & Sareen-- Katie took the bus & Sareen got off in Queens, so the rest of the train ride home was all on my lonesome ownsome. 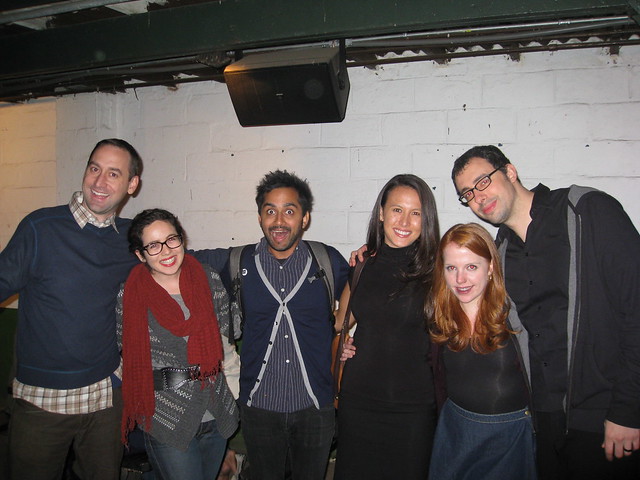 The same picture as above-- complete with a gross picture of me!-- plus the welcome addition of an Amy. 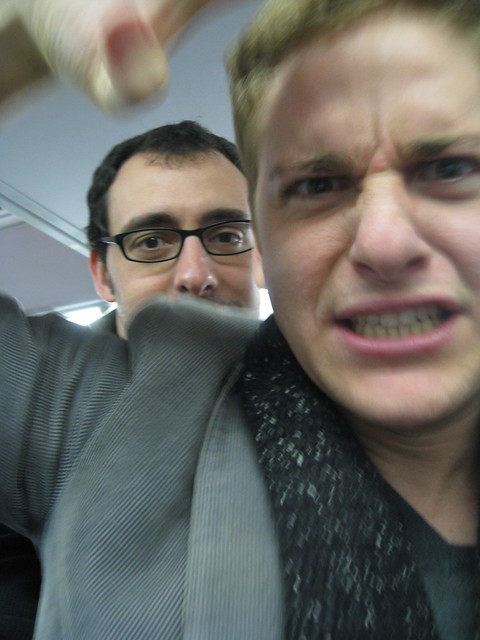 CAN YOU HANDLE THAT?
Collapse