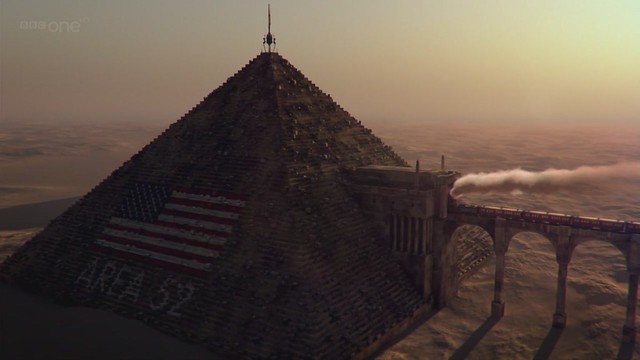 One of the things I've tried to capture in the current campaign of Oubliette is the motto "fuck it." By which I mean, to hell with being restrained, lets just go & embrace being awesome. Fuck it: a vampire in Tron: Legacy armor going around cutting people up with a lightsaber. Because fuck it. Doctor Who has got that in spades, & especially last night's season finale, "The Wedding of River Song." An Egyptian pyramid with a train going into it with the American flag painted on it along with the words "Area 52" is basically a crystallization of the fuck it motto. Why? Because it is awesome is why. I think Doctor Who has spoiled its fan base-- for any other show last night's episode would have counted as an epic mindfuck & an amazing achievement; for Doctor Who it just gets passing marks. Part of the problem is that "The Impossible Astronaut" was a sterling episode that set the bar pretty dang high, & that "Day of the Moon" book-ended the Silence aliens' story arc, leaving their parts a little flat. As for the answer to "The Question"-- I mean, of course we all knew that the question was "Doctor Who?"-- the only answer I can think of that would be fulfilling is "Doctor Forty-Two." Maybe how many real regenerations he has? Or what, I don't know, it isn't even a theory, just the best I could come up with. & oh! An Indiana Jones homage is always welcome. There has been some discussion on the portrayals of women & I don't really agree with a lot of what I'm seeing. First let me say: I certainly think Moffat's writing has plenty of room for improvement when it comes to female characters. In this episode, however, I don't see anything to complain about, videlicet Amy Pond. You've got her as the slick agent, all Nick Fury eyepatch & everything. Not only is she in charge, she saves The Doctor & The Holy Roman Emperor Winston Churchill & then later saves Rory, machine gun blazing. Amy Pond came off really well, I think, looking all Dana Scully crossed with Olivia from Fringe. 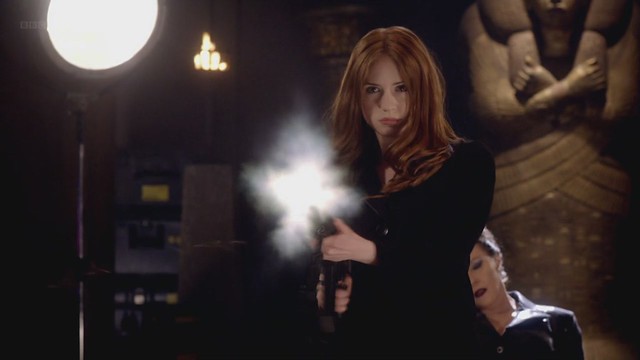 Now, River Song I can see some qualms with. I certainly don't feel like her character has been reduced by the revelations about her origins or her marriage, but for an episode in which her name is in the title, she doesn't get a lot of play, & her involvement in the marriage is lacking in agency, sure. I don't agree with the notion that River blackmailed her way into getting married-- what? Come on, letting the universe unravel to save your loved one is romantic! That is what I'd do, anyhow, you bet. As for the twist-- it was fine, but didn't give the guttural thrill I'd hoped it might. Like I said: so, so spoiled! The threshold for cleverness in Doctor Who has just been pushed very, very high. I mean, compare it for a second to the other big time travel show of the decade, LOST & you'll see what I mean-- there is more genius in a single episode's worth of timey-wimey dreamlogic than there was in that entire series. Anyhow, so that was last night-- there was a party I should have gone to but forgot about until the last minute, & by that time I was in pajamas & cuddled under a blanket with Jenny. Sorry, that is basically my masterplan in a nutshell right there. Otherwise, yeah-- I went to the gym yesterday, giving a bit of the what ho to the old flesh & bones. Curl! Bench! Twist! Shout! The episode of Firefly where Christina Hendricks returns as Saffron-- "Trash"-- so I ended up watching that for forty minutes on the elliptical. Otherwise, it has been a bunch of GoldenEye-- & turned level twenty!-- & filled with sniffling. With the temperature turning toward the autumnal, finally, I guess some plant has decided to dump its pollen all over the place, & my body is really unhappy about it. This picture of The Doctor is basically what I look like: 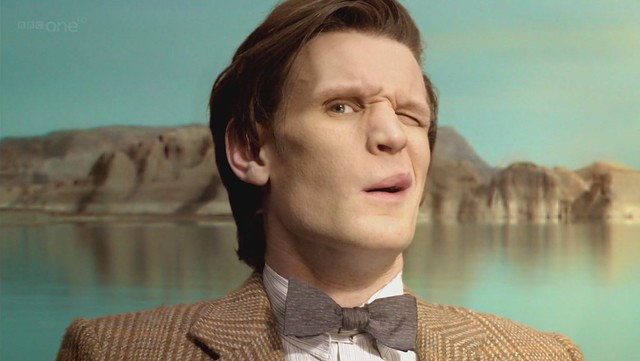