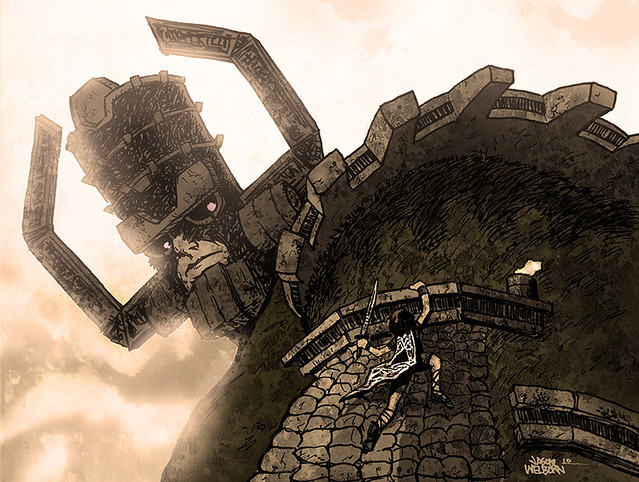 ("The Shadow of Galactus" by Jason Welborn.)

I feel like I should be writing a post about house rules for Oubliette, but I'm just far to lazy to actually do so. Consult notes? Figure out how the unordered list html will layout? No, instead I think I will shoot a zillion MI6 agents in the face in GoldenEye. Or Janus agents, or Russians, or whatever, I don't really care, I'll shoot everyone in the face. Or also I will ramble ramble about nothing in particular. Lately Jenny & I have been trying to cram a ton of Fringe into our lives, before Netflix becomes whatever abomination it is going to become & we drop the disc delivery service entirely. It is actually kind of annoying, because I'd rather be watching low investment television like sitcoms or cartoons-- still, Fringe is good, & when Jenny insists we watch it, I am pretty pleased with it, so I shouldn't complain. Let me see here; Thursday night Terra came over to watch some more Twin Peaks. Like last time we got in two episodes-- "Laura's Secret Diary" & "The Orchid's Curse"-- & then she went home at a reasonable hour. Next time though I suspect we might be around longer, since the next two episodes are fairly intense. Actually, the next four are, so maybe we'll still split them into two viewings. Anyhow, when she left, Jenny & I tucked into Community & Parks & Recreation. Oh man, Community, you are so great, & you always manage to throw an insane curveball to the lunatic base of your fandom. More, weirder fodder for the 'shippers! Parks & Recreation was pretty fantastic as well, with the reveal of Tammy Zero. All just wonderful stuff-- a Golden Age of Sitcoms. & then of course Friday I went to the gym-- not bad, if I do say so myself. A nice bit of lifting. I was overlong on the elliptical machine, though-- I was watching Chris on Jeopardy!, where he's won like, $90,000 so far.
Collapse