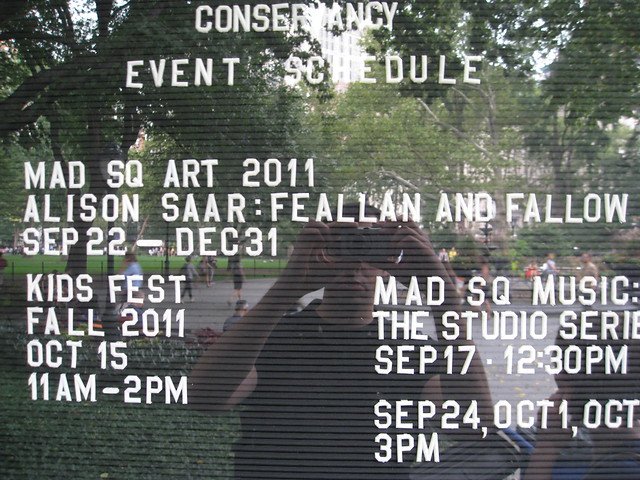 So they art I saw them putting in is Alison Saar's Feallan & Fallow at Madison Square Park. The sculptures are, as follow: "Spring," "Summer," "Fall" & "Winter," along with a non-season piece, "Treesouls." All the photos are by me except the last one, which Terra took, since she has better balance than me & you sort of had to stand on a wooden curb to get a good angle on it. & that is that; I've started eating lunch on a budget, so taking advantage of the park while the weather will still allow it is a big boon. Basically, Madison Square Park has turned into my haunt for an hour out of every day. Which isn't the worst way to live. Oh hey, you know what would hit the spot right now? Some coffee. 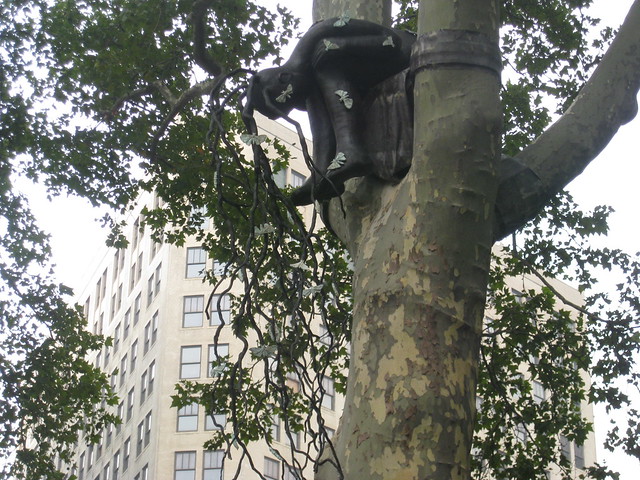 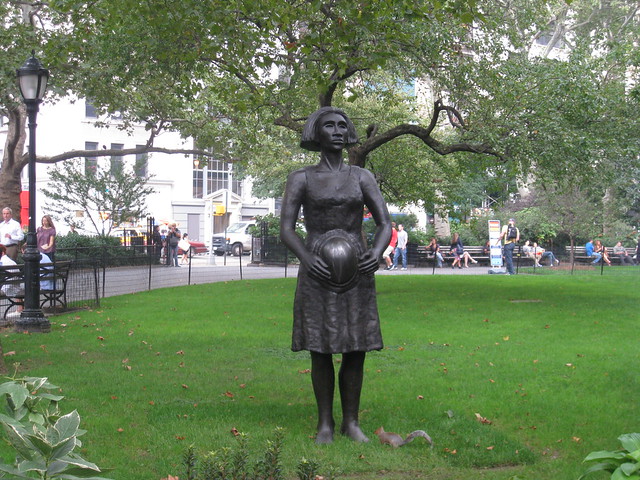 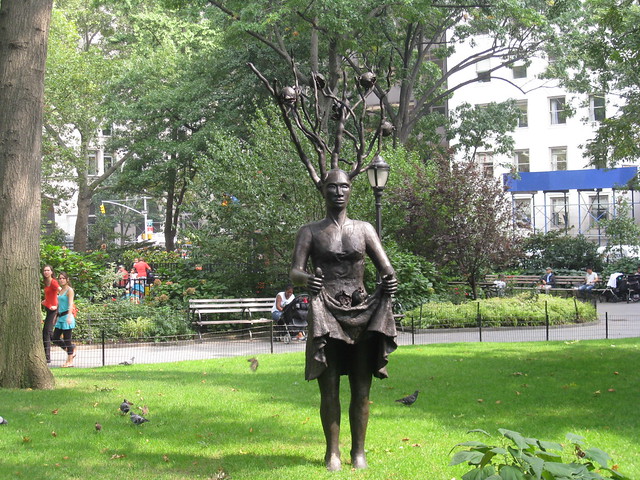 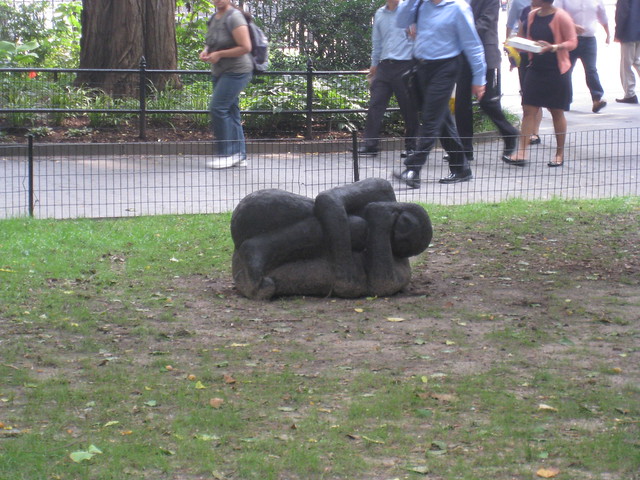 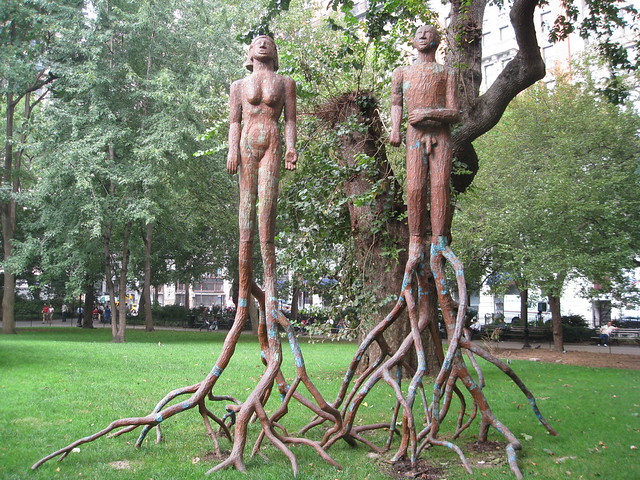 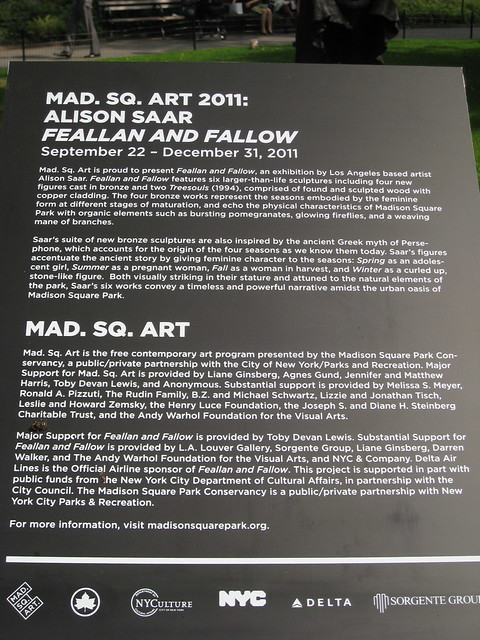 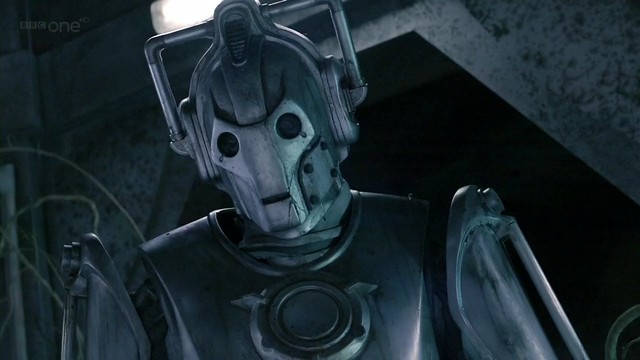 Continuing the grand old tradition of not really talking about stuff-- stuff is happening, it is just the perils of being a living person, it isn't that big of a deal in the grand scheme of mine-- lets talk about media consumption! I keep an eye on my intake & digest it later, making sure to get all the meat off the bone. There was the Doctor Who episode "Closing Time," & great, now the song by Semisonic is stuck in my head. A pretty lovely little episode, a little bit serial, a little bit call-back, a little bit monster of the week. Craig from "The Lodger" is back, as is the ability to speak the language Baby, which The Doctor evidenced in "A Good Man Goes to War", both put to good effect. There was some critique that jokes about The Doctor & Craig being an item were homophobic, but I beg to differ-- they seemed very much to be spoofing heteronormative assumptions about couples. Nice old shop ladies! Then again, I'm in a position of privilige, so many I don't know what I'm talking about. I liked it anyhow, & clearly Stormageddon, Dark Lord of All is clearly going to end up being one of those geek shibboleths, isn't it? Also, Cybermen, but not just Cybermen-- broken Cybermen! My fondness for damaged Cybermen is well documented. They just want to kill you & use you for spare parts, what's not to like? Then there was also My Little Pony: Friendship is Magic; it was a fine episode, but I don't think it quite lived up to the promise of the first half of the episode. Still the homage to the end of Star Wars: A New Hope at the end made it all worth it. Enjoyable. Alex Baldwin on Saturday Night Live was fine, but didn't knock my socks off-- I'm more excited for Melissa McCarthy, since I'm hoping they'll work a few Gilmore Girls jokes in there. Wouldn't a Gilmore Girls sketch just be the bee's knees, oh wouldn't it, wouldn't it? There was a filler Rob Dyrdek's Fantasy Factory in there, somewhere, but MTV has taken to airing their shows in their timeslots crooked, so we missed the end of it. Oh, & Fringe is back-- or well, we're watching it again, after watching last season's finale in June. I continue to be impressed with Anna Torv, who basically runs that show. She's really great-- I wonder what will become of her? When she has her long dark hair-- the Fauxlivia look...or well, the Earth-2 look-- I think she looks like Cortney. & that is basically what I've been up to. I mean, I ran my game on Sunday, & Saturday & Monday I went to the gym, that happened too. They finally fixed the churchbench, so I've been trying to make up for lost time on my arms-- on Saturday the weight room was empty, so I spent forty-five minutes moving from the crunch machine, to bench pressing, to doing curls. I felt like it was a pretty good Batman circuit.
Collapse