Ancient & slaughtered with the eons! Oh mighty monolith builders, senders of comets-- icy bodies honeycombed by hive-minded bugs, flung at c+ speeds-- bring your alchemy to this page! Let me find, in the cracks left behind, the time to actually scribble a hastily wrought account of my life, so that future clones can look back on it & smile. I previously mentioned going to Westchester to destroy the X-men celebrate Terra's hurricane-belated birthday. That was last Saturday & it was a lot of fun. Jenny had to work so she couldn't come, but I navigated the trenches & labyrinths of the Metro-North & whoosh, off I went. It was a nice time! There were a few work people, but not as many as you might think. We played a bunch of volleyball-- I have a decent learning curve. I was pretty terrible at first, but I wasn't embarrassing by the end of it. We shuffled up teams & what have you, but performance to break even & maybe even slightly trend towards winning.-- I dived in the grass & got dirty but I got the ball, so it looked athletic rather than spastic, I hope. There was grilled meats & Rock Band & then JJ & I took the train back to Metropolis. Mental note-- you've got to leave way earlier next time you go to Westchester to show Charles his pathetic folly visit Terra. That was a nice little weekend getaway! Sunday was just Jenny & I puddling about the apartment. She really is tops! My preference is to hide away, just the two of us. Monday was the gym, bang bang! You're what? Tin Roof? Rusted! I've moved from "tough guy nod" to "how you been?" to "special clutch handshake" with some of the guys at the gym. Gym relationships are hilarious-- like the woman I wave hello to, even though we've never said a word to each other! We've just ellipticalled next to each other several times a month for several years.

Then Tuesday, Terra came over & we ate burritos & watched some Twin Peaks, picking up where we'd left off. Since I'd recently experienced the commute from my place to hers, I didn't try to peer pressure her into another episode-- fly away & get home at a reasonable hour! Then when Terra had left Jenny & I split a bottle of wine & watched Castle & Two Broke Girls. Castle was a soap-operatic program where Nathan Fillion & Stana Katic have sexual chemistry & solve crimes. I know, that is the premise of the show, but the thing I like about the show is that, well, it basically recapitulates its core every episode. This one was a little heavy on the melodrama, but I featured Michael Dorn, who is awesome & Jenny loves. Loves. Also, Stana Katic could stand to put on ten pounds. Two Broke Girls-- or, I'm sorry, 2 Broke Girls-- was really terrible. Not even Kat Dennings, who I liked a lot in Nick & Nora's Infinite Playlist & Thor, could save it. I think I've decided that Whitney Cummings might be awful. Part of the problem is that it was set in a New York that was like what some eighty year old Hollywood producer who has never been to the city imagines it is like. I'm not talking "how do Joey & Chandler afford such a big apartment!?" stuff, I'm talking-- graffiti covered trains, people pretending Williamsburg was some spooky neighborhood & that the Upper East Side is some incredibly posh wonderland-- it was weird, weirdly bad. The plot is "topical" but for three years ago-- Bernie Madoff, cupcakes, hipsters. The jokes are basically...saying dirty words? I made the predictable comparison to Two Girls, One Cup, & moved on. Yeah, skip.

Goblins prick your feet!
Sneaking up when you asleep!
Drinking blood is neat!

My only problem with Goblins of Golarion is that it isn't a four hundred page hardcover. I mean, it is no secret that I like goblins, nor is it exactly under the radar that I like Paizo's interpretation of the little buggers. Starting with the mogwai from Gremlins would have been enough, as a stroke of brilliance, but the folks at Paizo really sell it by peppering in hooks & details, like their legendary antipathy for dogs & horses. Their stat block is sort of weak (though a +4 to dexterity is pretty nice) but you can fix it up by giving the scampering sociopaths a couple of the option racial traits listed here, like Advantageous Distraction or Strength of the Barghest. That said, the mechanics of the goblin just help tell the story-- like the +4 to Ride. That is just a slight mechanical twitch that spins out tons of options-- goblins on wolves, goblins on rats, goblins on dinosaurs, goblins on spiders...just pair them up with something & blammo. New hook. That is elegant game design. & like I said, it is the small spice of detail that really knocks it out of the park. The four barghest hero-gods of the goblins all gave them "gifts," as per most fantasy races creation story-- Zarongel's gifts of riding & arson & Zogmugot's gifts of pickling & scavanging being the best bits of their religion, if you ask me. Zogmugot's Flotsam Domain has a need little "reach into water & pull out what you need, but it is broken" power.

The idea of goblin's having a fascination with pickling is...right on the money. An easy alchemy that can be made grotesque & horrifying? Yes, that does sound pretty gobliny. Same goes for the goblinesque fascination with fireworks-- seems obvious in retrospect, & gives Narrators & Players a chance to...well, shoot rockets at stuff. I know gunpowder can be contentious, but even worlds without the technology for guns can have fireworks, especially in a fantasy setting with quasi-science of some sort. A box up in the corner mentions "Goblin Felt"-- woven from burlap & lint & flotsam, ending up the equivilent of studded leather-- that jives with me. I've done something similar, having creatures who never took off their clothing, just wore it threadbare & put on something over it, till that was ragged, then put something on over that, layers over & over. The goblin aversion for writing is present here as well-- I like the idea of a goblin spellbook made out of pictures & scrawl but no letters, just diagrams & illustrations, a scrapbook of confusing treasure for the party's spellcaster. Then of course there is the punishment the hobgoblins of Isger would visit on their goblin slaves, branding them with words. Horrible-- the book has a section on regions & Isger really stands out, as the goblins there are sort of the post-traumatic survivors of The Lord of the Rings epic & concluding war. Also, the Bulbhead tribe are pumpkinheads! I'll conclude by mentioning the goblin game "Spider, Rat, Knife," in which the rules vary wildly, but always include the eponymous objects. It reminds me of the goblin game 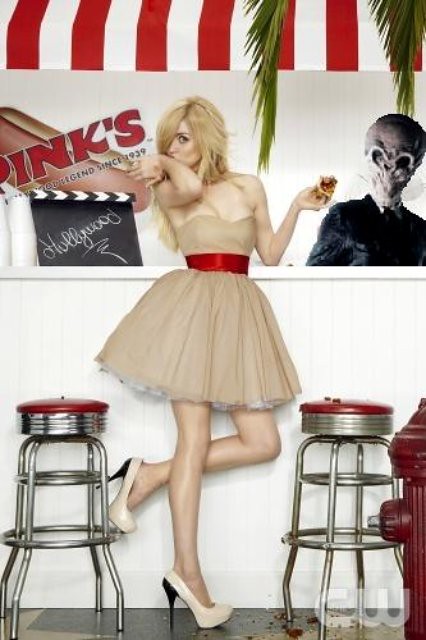 (Photo of Allison Harvard by Ricky Middlesworth, MSPaint goofing by me.)

fatbutts showed up, & then she was followed before too long by

elladorian's five year anniversary of living in Metropolis, but somehow she was the one roped into picking up our hot dogs & disco fries. James showed up just as we were getting cracking! The cast is half broken, half perfect. Oh Sheena-- she was sent home almost immediately, because she's a not-very-good model, but she's fantastic as a person. She should be hosting some television show, somewhere. Isis is there, no surprise, & she's killing it. Poor Kayla is there, but without her red hair-- so I'm not that impressed? Bianca is a huge disaster, but she is a good model, & can wear the hell out of a skirt. Dear sweet Laura, the cowgirl, is back; she's runner-up in my affections. The star, of course, is Allison, our wonderful creepy-chan. I'd root for Allison against pretty much anyone else ever from this show, except Heather. There are huge disasters, too-- like the girl with meth face & washed up "party girls" & the Christian who won't do anything she arbitrarily finds distasteful. In her defense, though, while a bathing suit might be smaller than the lingerie you wanted her to wear, it isn't lingerie. That might seems like a strange social construct, & it is, but social constructs are weird. Oh, Alexandria is back-- she got booed, which was great, but now I've had my fill. I will say, this season cycle looks like it will be crazy-- the shoot & the collage of all the girls isn't even "bad photoshop," it is bad MSPaint. It looks like someone had my fiddling around with the images on my lunchbreak. & there was a very Battlestar Galactica-esque grooming montage as they cut Nigel's gross hair. On the plus side, it is super Lisa Frank, Nicki Minaj & the intro! Oh the ANTM inro is amazing, & a perfect example of the kind of hot mess of genius I expect out of Tyra.
Collapse