Master of Devils by Dave Gross.

Not a lot of tie-in novels are very good. Gaming novels in particular. For every Dragonlance: Legends there is...the rest of the Dragonlance books. Alright, alright, Dragonlance: Chronicles has a certain charm to it, but I think you take my point. Still-- there are gems to be found. Even the Star Trek novels have John Ford's outstanding The Final Reflection, so any milieu can produce masterpieces. I'd gone ahead & given Dave Gross a chance on Pierce's recommendation, & been well rewarded. His first Pathfinder novel, Prince of Wolves, was a lot of fun, with equal parts pastiche & subverting expectations. Dave Gross synthesizes the conventions of the genre with the tropes of the game, & then spins those threads into the tapestry of the story. It really was a pleasant surprise, & it shouldn't have been since the folks at Paizo are what you call "good people," & I trust their judgement. Did you see their new miniatures?! Wait, now I'm getting off track. My core point here is just that I had preconceived notions about the fiction that comes out of roleplaying game publishers, but shaking those inhibitions was well rewarded, both previously & by this book. Using the conventions of roleplaying games-- cute asides about specific spells or nods to various class abilities-- is a nice way to telegraph information to your core audience, & used sparingly is a great way of giving the crux of the story to those who don't while providing an extra layer of detail to those who are in the know. Mister Gross isn't straight-jacketed by the rules of the game, but he grasps the heart of what makes the hobby fun & turns the worldbuilding of the Pathfinder setting like a jeweler showing a diamond's best facets.

Prince of Wolves was a horror tale, a sort of Ravenloft Gothic with a twist-- why have a vampire when you can have a penanggalan? Master of Devils is an homage to Oriental Adventures, drawing from a hodgepodge of sources-- the courtly love of a samurai tale, the grindhouse wire fighting of wuxia kung-fu flicks, the fairytales of The Classic of Mountains & Seas-- all blended into a heck of a pulp adventure. The story follows the same characters as Prince of Wolves-- Count Varian Jeggare & his tiefling bodyguard Radovan, members of the eponymous Pathfinder organization, halfway across the world in Tian Xia in search of a pearl of infinite price, or the husk of one anyway. They are divided from each other immediately, as Count Varian Jeggare becomes Brother Jeggare of the Dragon Temple & Radovan travels the land in the company of Burning Cloud Devil like one of the villains in Ninja Scroll. Radovan presumes his "boss" is dead & travels around having high-flying fights while Burning Cloud Devil struts & flips his beard in a charming caricature of the evil martial arts master-- it is enough to make Kill Bill's Pai Mei jealous. Brother Jeggare is half prisoner & half student at the Dragon Dojo, while around him swirls a samurai romance, a story filled with hidden identities, court eunuchs, unrequited love-- all the classics. What really tips it up & over is when you flip to chapter five-- "Judge Fang"-- & find that their dog, Arnisant, gets his own storyline. Narration from a dog's perspective is cute, but Gross makes it an engaging storyline, as Arnisant goes around rounding up kami, kitsune & goblins. The dreamlike folktale atmosphere of his storyline sells the bit, making sure it never descends to a dopy "do'h, I'm a dog" shenanigans. Impressive & fun. 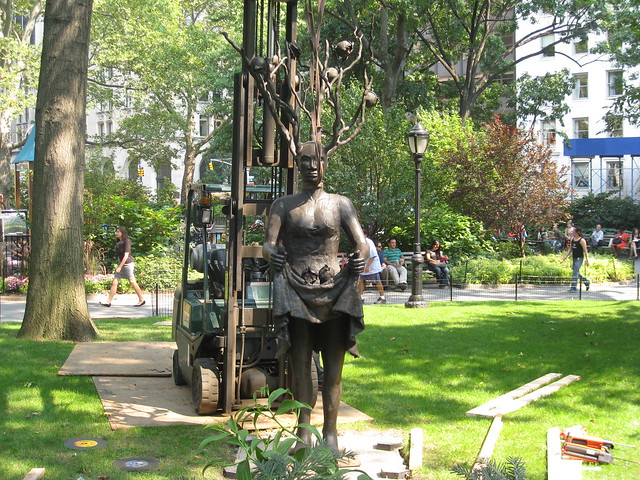 They are putting up new art in Madison Square Park, but I don't know anything about it. Fine by me, I was sick of the big distorted head. I mean, I liked when you could sit in the shadow, but after that, psh. Whatever! Lets see, life, life, being alive, meat going around, doing meat things, having meat make ideas, having meat make noises to communicate ideas. La la la. Lunches with Terra, especially at Prêt A Manger, which I've been craving something fierce. Then we slug it over to Madison Square & gulp it down. It isn't a bad system! Yesterday Jenny had to work really late, so I sat down, finished the book I was reading, & headed out to the gym. A pretty decent hour & fifteen minutes, with two sets on the free weights, though the churchbench is still busted up. Bummer! On the television I flipped back & forth between Storage Wars & Man Versus Food. So yeah, I root for Barry, Brandi & Jerrod, in that order, & watching Adam Richman pal around with Andrew Zimmern was cute. I was going to go for another hit of elliptical at the end there, but I lazied out. Instead I grabbed some hot wings-- & thanks to a last minute phone call for Jenny, grabbed some more hot wings for her-- & headed home to watch The Comedy Central Roast of David Hasslehoff. I like roasts! I guess that might be embarrassing, but I do. Also, I have weird feelings about Hasslehoff-- he looks like he could be biologically related to me, judging from what I remember about people I'm biologically related to. Anyhow, also, I like Hulk Hogan. He fought Andre the Giant, the greatest gladiator of his generation! He does a little wrist flourish & the crowd cheers-- it is just reflex! Then to bed. Or well, "bed," since I managed to wake up at three thirty in the morning & potter about till about four thirty, when I finally was able to get back to bed.
Collapse