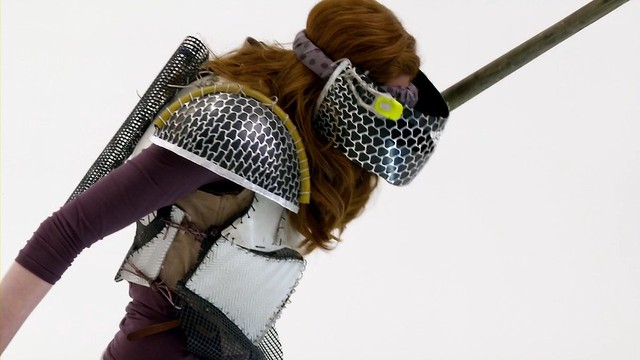 I don't know which costume designer on Doctor Who is the one responsible for all the sci-fi armor, but between The Amy Who Waited's make-shift armor in "The Girl Who Waited" & the awesome industrial acid suits in "The Rebel Flesh" & "The Almost People", I'm super impressed by their work. "The Girl Who Waited" was pretty great-- I mean, time travel, melodrama, samurai swords, robots, creepy buttons...what else are you asking from your television? Everybody acted the hell out of this episode. Red Waterfall or Green Anchor? Awesome word-salad. Jenny & I discussed the strengths & weaknesses of episodic television-- I feel like a lot of criticism leveled at Moffat is that the show hasn't fully embraced serial television, & still has a lot of episodic television at its core. I also hear a lot of praise about how you can just pick up Doctor Who at any point-- especially at any Doctor-- & start there. See-- that is because it still has that episodic skeleton. It isn't all the meta-plot about Melody, & if it was people would have a hard time jumping in. It is a feature, not a flaw. I liked this episode-- & also, I'm on Team Mordicai. We get cloned, displaced through time, turned Bizarro, it doesn't matter. We're all on the same side, all of us Mordicais. Though to be fair-- didn't Rory wait for a millennium? & wasn't the Doctor previously okay with multiple paradox clones, or does that only count wih goo people? Whichever, I do hope we see The Amy Who Waited again. Anyhow, that was last night, along with some scrod & broccoli rabe that Jenny made. It was really good broccoli rabe; lots of butter, some onions, some jalapenos. My eyes were watering all night & I couldn't figure it out until I finally remembered the peppers-- I must have rubbed some oil into my eye. Dork. Oh, & other than that, when I came home Jenny was there babysitting Olivia, so I played with them for a bit waiting for Kira to come over. That was fun, even if I was a little out of it from work. A couple of Harpoon UFO Pumpkin beers helped sort that out. I don't know that I've ever had a pumpkin from them. Serviceable! I've yet to be wowed by a pumpkin beer yet this season, though I'm keeping my fingers crossed.
Collapse