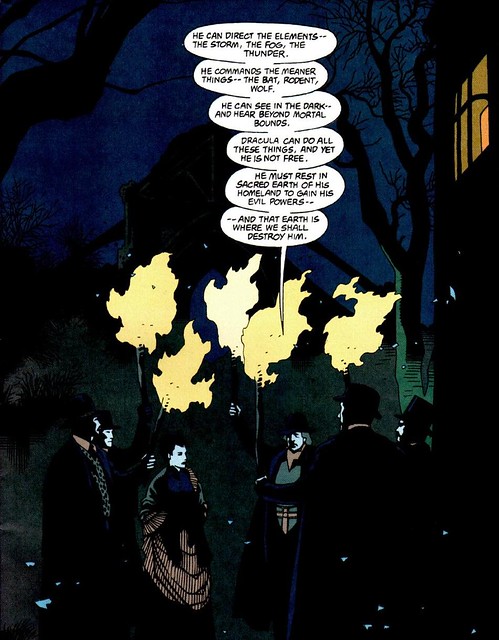 Back when I was running my first full Oubliette campaign, my Player Bernie convinced me to embrace the old World of Darkness scheme of having powers that last for a "scene" rather than a number of rounds or minutes. A "scene," that being whatever bit the Narrator decided-- it isn't hard to tell them apart, actually. The segments of the story are pretty clear, when you are in the middle of it. When the Fourth edition of Dungeons & Dragons rolled around, they had gone in a similar direction with their underlying system-- say what you will about 4e, but the At-Will, Encounter & Daily powers trichotomy is really strong. An improvement over the Vancian wizard who has to hoard his daily fireballs & over the poor dumb fighter who only gets a stick to hit things with. This is the direction the games should be headed in, one in which they realize their sort of post-modern literary tropes, & embrace them. We already give out experience points on a session by session basis-- why not make a game session an effective unit of "time?" Counting minutes in game is impossible, but counting story divisions is natural.

Part two of this is...I hate little tweaks, especially little tweaks that complicate book keeping. This is an endemic problem in gaming-- I complain about the Feats in Dungeons & Dragons 4e, but the Merits in World of Darkness are just as bad, & ever other system has their own guilty culprits. "Oh, hey, I forgot that I had a +2 to fire based attacks, can I re-roll that?" Yeah...nope! There is bean counting, & it is the worst. Or things like a +2 versus poison...when poison only comes up in the average campaign like, once or twice. Then of course, the poison isn't in your cup, or the bonus slips your mind, or you roll terribly & the +2 doesn't even help. Ugh, so frustrating! I've been there, & it really sucks as a Player, but it also sucks from a story point of view. The line is "I spent the last few years building up an immunity to iocane powder," you know? I'm not opposed to finnicky little widgets that can be built into a character sheet-- powers that may make for a complicated build-- as long as they can happen in downtime. You know, while you are leveling up or spending your experience or what have you. It is when the story is actually in motion that I don't have the time or interest in seeing...well, nitpicking!

That all being said, I don't need powers to be...totally discreet, & packaged? I use the various Disciplines & Gifts of the World of Darkness as a sort of grab-bag of Powers, but I conceptually admire the Spheres from Mage: the Ascension for their broad scope. Mage: the Awakening went the opposite direction, having Spheres but somehow managing to bog the game down with huge lists of spells, but that raw notion is interesting to me. Dungeons & Dragons of course has become a game of skirmish combat, so their rules are strict, but you can bring new flavor in by reskinning them, descriptively. & that helps a lot-- I try to impress on my Players that the rules of the Powers are there, but those rules are on this side of the Fourth Wall. We, the Players & the Narrator, know the rules, but the Character doesn't. & I am very flexible, I think, or I try to be-- if you want to try to bend the rules of the Power, but it is within the scope of the power's in-game effect & source, I am totally open to tinkering. I am more about the spirit of the power than letter of the rules.

I think sometimes about Immortal: the Invisible War-- a game I think sometimes only me & Antonio ever played-- which had "serenades," where you combined multiple Powers into a single effect. You know, using something like Nightmare's "Monstrous Countenance" & Protean's "Shape of the Wolf" to become some kind of horrifying amalgamation. That sort of thing. Vampire: the Requiem has "Devotions," which are tricks you can learn that combine powers in novel ways, but they are permanent purchases; in effect, new powers that you can purchase with similarly limited scope. Not exactly what I'm looking for at all! I'd much rather a single robust mechanic that supported innovative use of supernatural abilities-- give it a hefty cost, to make sure it doesn't get abused, but then give the Players a chance to really flex their imagination. Which is usually my design philosophy-- I want elegance, but I don't think you need to hamstring the Players to do that. I'd rather the Players have options that are balanced by cost than have half-way the Powers they want. Changeling: the Dreaming has another interesting twist-- the Powers system is utterly ruined, just terrible-- but it has the Powers ("Arts") & the possible ways to target that Power ("Realms"). Casting it on another, or on an area, or attaching the effect to an item-- it provided interesting ways to remix the Power. Or in theory any way-- like I said, the game was all but unplayable.

I don't have a point here; I'm rambling, as usual, just sort of brainstorming for myself. I like constant Powers, abilities that are always on. When I played Skrim in

martak's Oisos game, the duration on my "Mage Armor" was in "hours," & so it was in effect "always on." I could account for it in my Character on a fundamental level. Powers in that category should just be always on. Why fiddle around with hours? Seems silly. The same thing for powers that last "minutes." Should be scene based. Then of course, you've got powers that are instant. Self explanatory. Powers that last for "rounds," are tricky. I don't like them, but there is something to be said for the choice. You know, the Barbarian's Rage is a good example; you have to hold on to it, choose when to use it, with the threat that it might run out & leave you exhausted. I don't like sort of Deus ex Machina mechanics to modulate rules, either-- the Paradox mechanics in both Mage games is a fine example-- & would rather that you just build the system up from a fundamental level where the wide scope of abilities is balanced by cost & trust. For right now? I'm happy with the generic take on World of Darkness I've got in Oubliette. I would let a player try weirder things not explicitly outlined in one of their Power's mechanical descriptions. If it was on the cusp of plausible, I'd say it takes a point of Willpower, & if that extends its "casting time," because it already costs a point of Willpower, so much the better.
Collapse