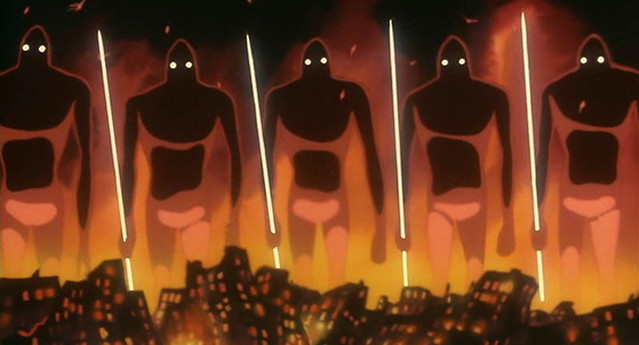 Jenny & I tried to watch Nausicaä of the Valley of the Wind last night, but we only got halfway through the disc before it choked up & froze. I guess there was just an epic scratch-- it froze in chapter 11, but even skipping to chapter 13 didn't unstick it, so I called it a loss & told Netflix to send a new one. I've never seen it before, can you believe it? I was really digging it, but Jenny said she thought it was boring. Figures; I like boring things. I joked about how I didn't think it was boring enough, I wanted the characters to stop & have a section where they talk about economics & the sociology of a post-toxic jungle world for an hour. I was super grooving on it, & it actually was covering ground I've spent a lot of time thinking about for my Oubliette game. The bugs & the Ohmu & the toxic jungle evoke a situation somewhat similar to the Invid & the Flower of Life in Robotech, & I think sometimes about mashing up the Invid & the xenomorphs from Alien. Plus, you know, ceramic armor, diamond swords, airships with portals made of the shells giant alien bugs discard like gargantuan cicadas, shadowy titans striding the world & grinding it to rubble...yeah! Yep, that is my jam right there. Lets see; for lunch, Jenny & Terra & I went to Sagaponack for crab rolls (crub rull!) & then for dinner Jenny & I got Michael & Ping's Chinese food, which was pretty good! I was feeling it, anyhow. & that was that. Jenny has bug bites, & a head ache, & I was tired & crabby & in general the worst. It wasn't bad, but it was like, an exhausted slump. I'm just happy Jenny is home, for one thing. Since the movie wouldn't play, we ended up watching a couple of episodes of Storage Wars. I don't really like the pawn or auction genre, but I do like Storage Wars alright. & I picked up the CSA, & smashed the fruit. I carried the tomatoes separate so I wouldn't smash them, but we don't like tomatoes that much, & we have a ton of them already from last time, & the raspberries were the thing I actually should have treated with kid gloves. Dumb.

The Curse of the Wendigo

This is the second book in the Monstrumologist series, & it really exaggerates the successes & the failures of the previous book. I'm torn! I liked it a lot, but it has some pretty fundamental problems. Well, on problem, really-- women, or the lack thereof. Women are only around to be horribly murdered, it seems. Oh hey, a textbook Women in Refrigerators, even, greeaat! Lilly Bates has a hint of promise, but the whole "violence against women!" thing is a prime motivator, & sort of distaste around that undercuts the novel. On the reverse, it is some of the better horror I've read. Because it is a Young Adult book, there is a degree of restraint-- though not much, I'll admit-- that makes the impact of the gruesome much more stark. Rick Yancey does not kid around when push comes to shove. & wendigo! Radarless' character Bedwin was possessed by a wendigo named Hermóðr in the last campaign I ran; Radarless ought to read this, he'd like it. This book is chock full of even more name dropping than the first-- Algernon Blackwood, Brahm Stoker, even Jacob Riis, & so forth. I don't mind it one way or the other-- the frame sequence actually makes good use of it, I think. The Curse of the Wendigo plays with the nature of monstrosity-- man's inhumanity, the possibility of the supernatural-- in a way that is very difficult to do, & it pulls it off. In a world where headless monsters with mouths in their chests exist, it is hard to say "stop with this superstitious nonsense!" with a straight face. It is something Jenny has been talking about lately-- can a monster even be real? Once you discover that it is real, doesn't it become just a dangerous animal? Yancey solves the conundrum by rooting the division in the possibility of a divide between the physical & the spiritual, & he backs it up by not caving in with an answer. Instead he peppers red herrings & plausible deniability through out, &...well, you know how I like an unreliable narrator.
Collapse