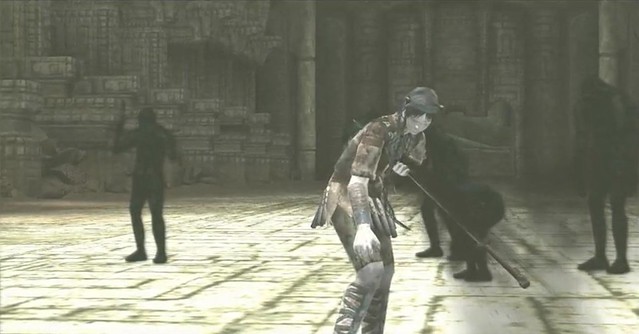 So, The Monstrumologist really put a bee in my bonnet. The idea of the infectious monster is a good one-- or really, a great one. Zombies, werewolves, vampires-- the classics, they've all got that in common. The xenomorphs from Alien, the Gogolithic Mass from Superbrothers: Sword & Sworcery EP, the black tendrils from Shadow of the Colossus-- there is plenty of the same thing in my more modern (well, okay, zombies are modern, but still so big that I count them as classic) influences. The thematic impact aside, there is just the fact that it would be really nice to adopt something like that for Oubliette. I am a big fan of character development-- it sounds like a no-brainer, but you would be surprised how many people feel they need to "stick" to their character concept, rather than developing it. My current group is good about it, but sometimes...evolution needs to be forced. & even with good players, providing a hook is a great asset. Shoring it up with rules is just a tool to do that. I've said it before-- a rule set can be an asset to storytelling. Having "elf" written on your character sheet counts more than just telling people you are an elf, because it anchors it in your mind as "real." Having attribute adjustments for an elf helps even more, & having rules that make an elf play differently is the peak, because it makes the difference more than cosmetic. It works on another level of your brain. When you see something in the rules, it pops out, because it matters. This can be a weakness, but it can be a strength, too, when used sparingly. Attributes are a good example-- they help define a character. Arguments can be made about them being limiting, but that is a trade off. You get a deep, bold stroke-- used wisely, that can make an outline that pops.

My first impulse is to just say that at the end of a monster's statistics block, you have a bit on the aftershocks of dealing with it. Say, off the top of my head, a "Minor Mark," for those who encountered it, fought with it, interacted with it & a "Major Mark," for those who really got into it-- maybe the vampire sucked some of their blood, but not all, or they we cocooned to the wall in the nest of the Spider Aliens, or maybe the had an ongoing dream link with the dark telepathy of Cthulhu over several sessions, the Donner family that feeds on frozen zombie flesh to stay alive, something like that. Each could come equipped with a Flaw-- again, a weak one or a severe one, depending-- because I think the Flaw system in World of Darkness is really strong. Rewarding players for screwing their characters over dramatically is just the kind of innovative system building I like to see. Each Mark would also allow you access to some kind of Power-- you'd still have to buy it as usual, but it would provide the basis. You know, the guy who gets bitten by the vampire starts having a bit of the "look into my eyes..." thing going on, & the guy who the werewolf scratched but didn't bite starts finding himself able to talk to canines. I'd let people work it off, if they wanted to-- going to therapy for psychological problems, getting exorcised, being healed by Elrond-- but I wouldn't be too gentle. Maybe a Major Mark can only be downgraded to a Minor, never truly healed. I'd also be lenient letting people upgrade their Mark-- "I effing love vampires, just because I didn't get bit doesn't mean I didn't hear the symphony of the night!" You know, flexibility. I guess my point is to not just think "oh hey, Mina Harker is troubled forever because she met Dracula" but also to include it in the monster's basic mechanical make-up. 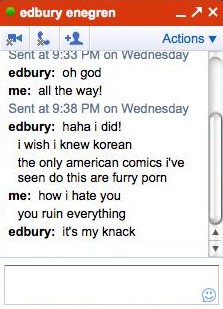 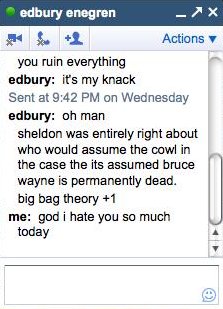 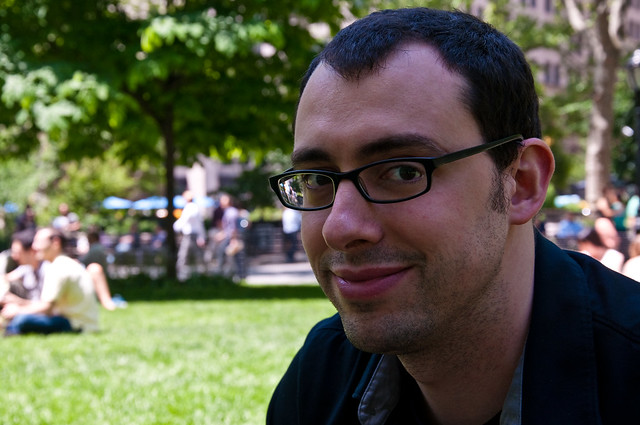 (Me in Madison Square Park back in June, photo by

I don't know, I suppose I have been up to other things, I mean I must have been, I'm alive nearly a full twenty-two hours out of every day. I went to Molly's with Terra for lunch on Tuesday I guess? We were both huge, huge disasters, but luckily, Molly's is kind of a huge disaster too. There was an earthquake while we were there, but we could barely even handle eating, let alone eating & talking, let alone eating & talking & noticing natural disasters. I mean, if you can call it that. That was the same day that I only managed twenty minutes at the gym, so yeah. Sort of a failed day. Yesterday was better! I went to lunch with Aubrey, Laura & Tamarra. We got sushi at Chef 28 & gossiped about work. After that was the big adventure to the Basement! Terra & I went down there, fought a skeleton & three lizard people, & then found a bookshelf for me. The skeleton I was prepared for, but who knew that the Flat-Iron had reptloids? The bookshelf is a rare find, as it fits perfectly into my rather limited space budget, & it has quite the pedigree, since it was an extra piece from the Chief Executive Officer's desk set. Now with a bookshelf & the plastic-framed National Geographic maps of the ocean floor, I'm almost all set. Just a few finishing touches! Came home after that busy day & put in my hour & fifteen minutes at the gym-- mostly cardio & free weights. Which-- that was that! & then today I climbed the twenty-two flights of stairs in the building in four minutes & thirty-three seconds, which is intense. Ben was right there with me, though. Lets see about hitting the gym again tonight! That is the plan, anyhow. & then, the Hurricane.
Collapse