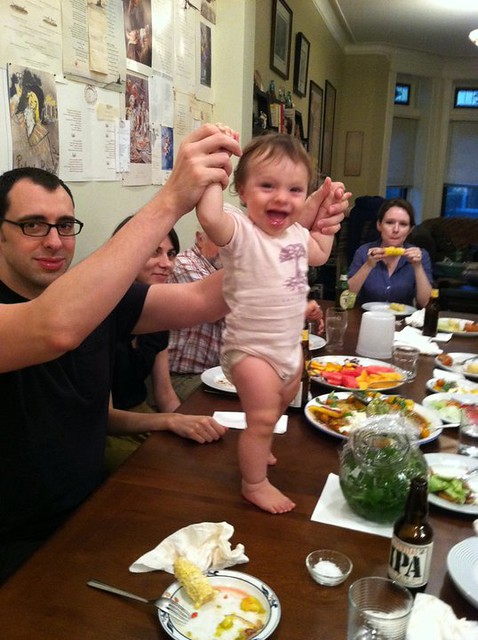 Playing a lightning round of catch-up. Sunday was a barbeque at Robert & Judy's, which ended up getting rained out. No big deal-- one of the perks of having a professional-grade kitchen & a roomful of chefs is that even your worst case scenario is a pretty awesome scenario. Kira & Nino (& Olivia) picked up Jenny & me & we road over. Jonathon & Erin were there with their baby, Evan, who is basically just Baby Winston Churchill. Robert's son Damon was there with his daughter Lilly, so it was a kid-stravaganza! The hot dogs from Fleisher's were the real winners, though the hamburgers & antipasta were pretty wonderful as well. It was nice, but by the end, I was exhausted. I haven't been sleeping well, & it just hit me like a bit of a truck. I thought about going home, but I'd volunteered to ride the train back with Kira-- Olivia hate cars, as it turns out-- & I didn't want to abandon her. Plus, I figured a stiff drink would set me right, once we got to their apartment. Unfortunately, there were no drinks! We did walk from the subway to their apartment in monsoon rain, which Olivia loves, as it turns out. So I just sort of phased in & out of reality, tired & fussy, until eventually I stood up & was like "it is time to go." I was just done. I got home & zoom, right to bed. Not that I slept well, though I think on Monday I might have actually been woken up by my alarm clock! Seriously, when I say I've been sleeping badly, I really do mean it. So that was Sunday, in a nutshell.

Monday I got to work & started cleaning out my desk to move it over to my new desk. The computer guys came over & everything. I'm here now, though my space isn't situated yet. I have a window, & an air conditioner, both of which are solid perks. I also have a wall at my back, which is a step up from having the conference room right behind me-- I was always in danger of sudden ninja appearances by who knows who. I got lunch with

porphyre & her Tony, which was lovely. We got lunch at Sagaponak, which is a weird little chunk of Nantucket with a decent crab roll-- yeah, like a lobster roll, but cheaper. We spent the whole time talking about Sleep No More, which was great. I'll talk about that brilliant show forever! Seriously, so great. After that, back to the grind...but then suddenly! Jenny wanted to get drinks, so we rounded up

fordmadoxfraud from Kit Marlowe & Co. & went over to Dojo to eat hijiki-tofu & split a pitcher of beer. That was solid, & a good stepping stone to our eventual genius plan, which was to meet up with

elladorian, drink a ton of absinthe & watch a special on the monsters of Doctor Who. Basically it was a show recapitulating I Love the 80s, only about the Eleventh Doctor's antagonists. The actual cocktail we drank is a Death in the Afternoon, a drink designed by Ernest Hemingway-- champagne & absinthe. I sort of lost my mind! & slept badly. Tuesday was nothing much; I went to the gym but was so tired I only managed twenty minutes of cardio before coming home to eat fish stew that Jenny made, & then watch Leverage.
Collapse