Going through & watching the Tenth Doctor episodes of Doctor Who has really made me realize just how many of them I've seen already. You know, it has been five years, so there is plenty of time to pick them up here & there. I don't mind rewatching; a lot of them were thrown on the tube during late nights & as parties were fizzling out, & as previously mentioned, happened over the course of half a decade, so there are plenty of holes to patch up. "Tooth & Claw" I remembered pretty well...I mean, Queen Victoria, werewolves, ninjas, check! I liked the werewolf in it quite a bit, actually...the effect of moonlight on bare skin, the supernatural flourishes like sudden winds, just a lot of nice touches. We took a break after that episode to watch Billie Piper dance & talk about Secret Diary of a Call Girl. "School Reunion" was next, which really is the most homagey of homages. That being said, Sarah Jane is pretty great. I don't have any connection to her form original old school Who, but you can pretty easily imagine it. The bits with K-9 were awfully saccharine, but then, they sort of had to be. & Anthony Stewart Head! When you hear him speaking off screen...he sounds just like Doctor Frank-N-Furter. Nothing like Tim Curry...but exactly like Frank-N-Furter. Weird how that works. More to the point, it was an Absinthe & Czech "Candy" Party! Apparently I am the only one who didn't think the candy was gross. Apparently my Eastern European roots are showing. The night was full of chuckles, & then floomph! Into bed. I kept having dreams about my broken face-- getting up in the night to find it had collapsed into a hideous mask of evil. Save me, Breetai! 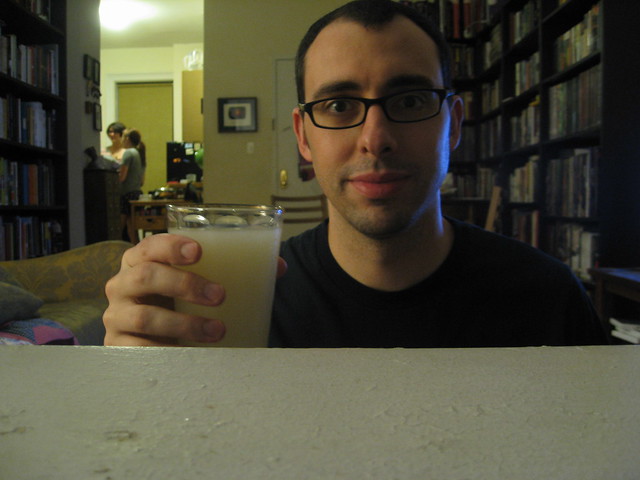 Eight light-minutes out,
we let WOLF out of cryo.
Let him deal with it.

I've said it a million times before: Mirrors is my favorite World of Darkness book, bar none. The whole point of the "New" World of Darkness was to get away fromt the claustrophobia of the "Old" World of Darkness & make a setting where the information provided was optional, suggested. The monster books were all general notions, not required metaplot. This direction was exaggerated in Promethean, with books like Magnum Opus & Strange Alchemies giving alternative rules for non-corpse-jigsaw Prometheans, science fiction origins & all kinds of other "rule" breaking. Mythologies for Vampire: the Requiem is another good example, with all sort of assorted notions for evil mirror magic, vampire drugs, secret societies, &c. Mirrors was the culmination of that urge, a grab bag of ideas & rules, a mess of mechanical transparency that really hit the spot. I run my Oubliette campaign using the World of Darkness system, so getting a tool box to play with hit the spot. These two pdfs are what White Wolf is calling "Shards"-- basically, half genre toolkit, half setting. Electronic publishing isn't really for me, especially not for game books. I don't have an ideological problem, I just want the thing on my shelf, or behind the Storyteller's screen, where I can stick my fingers in-between the pages. That being said-- I liked Mirrors enough to go ahead & pick these two up. As they are sister projects-- or daughter projects of Mirrors, if you prefer-- I am going to review them together.

Mirrors: the Infinite Macabre-- the Space Opera Shard-- is the vastly superior product of the two. Right off the bat, Infinite Macabre sells me with promises of an Otherspace Underworld of dead stars & haunted spaceships. That! I want that, I want an Oompa Loompa, daddy! Following that up by saying that a Space Opera World of Darkness is either far future or far back into prehistory? That is just the "two" of a "one-two punch" combo, for me. & Infinite Macabre combines really clever worldbuilding with a crucial ability to actually give you what it says on the tin. When you write the words "Space Opera," the first thing that springs to mind is...well, Star Wars. Lets not make any bones about that. Infinite Macabre embraces that, with rules for a new Merit called "Attuned Weapon" that gives Space Opera Mages a reason to use melee weapons in a sci-fi setting...elegant weapons, for a more civilized age, as it were. It isn't a slap-dash laser sword, either-- Attuned Weapons have neat effects based on their signature Arcana-- so a Death Scythe & a Fate Scythe would each have separate perks. There is a "Spaceship" Merit that works like Haven-- Size, Speed, Weapons & Armor are each separate-- which is fun, though I would add "Stealth" as an option, to allow for things like cloaking devices. Then we get to the good stuff-- the Stygian Gates, the wholes in reality that function in place of faster-than-light drives. Making the jumpgates go to the underworld? Genius. Heck, I'd maybe insinuate that underspace is a dead universe because something killed it-- maybe there was no death, once upon a time; a cosmic Eden that existed until the Atlantean Imperium blew up their dimension & moved up into ours. The fact that the Gates cut a whole in the crew in the shape of the gate itself for a point of Lethal damage? Pure sooky C+ gravy. Eat your heart out, Event Horizon. The weakest bit are the rules on building aliens-- there isn't any transparency on the alien Qualities. Are they more like Dread Powers or more like Merits? I feel like they are more the latter, which is a shame, since I'm personally opposed to supernatural Merits. Otherwise, sheesh, great stuff. Integrating vampires into Space Opera is obvious-- Blindsight is a perfect example-- but it is werewolves that resonated the most with me, actually. This came up in Doctor Who last night, in fact, but that is just synchronicity. The idea of packs of werewolves defending their turf-- with that turf being whole moons, or a arm of a spiral galaxy-- or only werewolves born on Earth being "good" werewolves...there is just a whole story waiting to rip its way out of there. A Promethean planet, itself made self-aware? Sin-Eaters dealing with the teeming billions of ghosts from the destruction of Alderaan? Infinite Macabre is just full of these kinds of gems.

I'm less enthusiastic about Mirrors: Bleeding Edge, perhaps because the jump from "horror-punk" to "cyber-punk" isn't that much of a jump? I mean, the World of Darkness, right out of the box, already has evil pharmaceutical mega-corporations, enormous economic divides, ur-figures pulling strings in the shadows, all that jazz. Goth-noir ain't that far from techno-noir, especially not in a post-Shadowrun world. Actually, the critical theory on cyberpunk is maybe the strongest thing about Bleeding Edge-- leading off with "cyberpunk destroyed science fiction," & then pulling it back to "cyberpunk destroyed science fiction the same way the Sex Pistols destroyed rock & roll" just about nails it. The timeline that follows-- from Neuromancer through the aforementioned Shadowrun & down to Stephenson & anime-- is a strong structural support. I guess I just fundamentally don't need this product. The use of "Origins" & "Roles" shows a bit of convergent evolution with me Character Traits but "Plugins" are another example of "supernatural" Merits, which are a pet peeve of mine. Genuine cybernetics are better represented by Powers, I say. Alienation as a mechanic to replace Humanity or Morality is fine, but doesn't go far enough to actually stand out. "Loyalty" is the best mechanic in the pack, as it rewards cooperation...& betrayal. That is kind of cute, & something I'm actually considering. The rules for "Organizations" are alright-- Power, Finesse & Resistance give you abstracts to think about, & letting agents of an Organization get Willpower through fulfilling the Organization's Virtue or Vice is an interesting touch. I don't mean to say it is a bad product-- just that its shine is dimished by proximity to Infinite Macabre.
Collapse