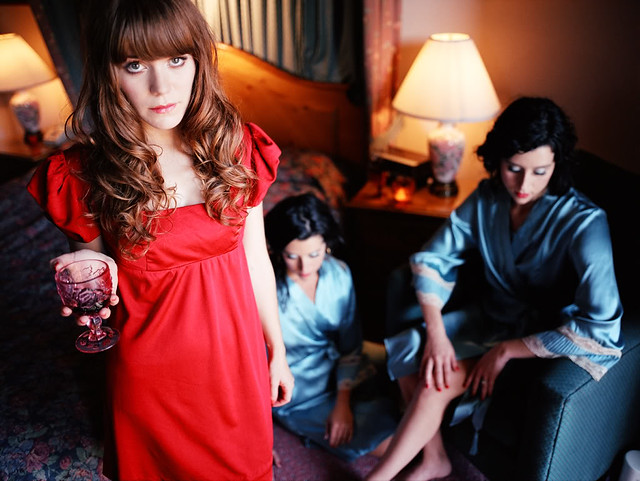 After a hiatus that dragged on far too long, Act III of my Oubliette campaign resumed yesterday! If you recall, Act I ended with our heroes parting ways, while Act II ended with Long Cleaver of A Thousand Helms & Duke Slumbering Heart Dwells on the Hill confronting Man In Black, while across the world Blue Glory on Dark Water & Curie First-light escaped from the burning skyscraper 101. In the meantime, a decade has passed, a long period of silence. Events have been in motion. Across the border from Anise, new groups calling themselves the Hungry Templars have arisen, in mockery of Anise's elite troops. Meanwhile, Anise has been expanding south-- the Zoroaster Vespers, the former Jack of Cups of Aubade's Arcanum has declared for the Licorice Duke & been appointed in turn Duke of the newly "minted" Peppermint Duchy. Oh, puns. Black Jaguar, the legitimate heir of the Licorice Duke & half-brother of Blue Glory, openly revolted with the Sugar Plum Barons, who declared Black Jaguar their Duke to undermine Duke Licorice's legitimacy. The forces of Anise & the Licorice Duke quashed the rebellion, & then declared that Black Jaguar had been in on it from the beginning, & that it was a plot to get the Baron's to finally declare a legal Sugar Plum Duke. The now Duke Sugar Plum, Black Jaguar, was then called him as a "reward," to vacation in the Licorice Duke's palace-- which most assume means house arrest. 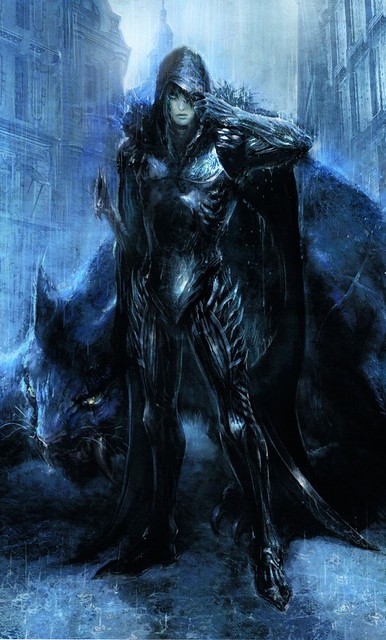 Blue Glory the Nightmare Lotus-- after a mysterious sojourn in The Savage Lands-- has been ruling Saltwater Duchy as Slumberheart's regent, & serving as the (semi-)incognito Winter Champion. She came out of the Wild East with a new destriar, a terrifying apex predator out of a bad dream. Long Cleaver of Dark Mountain Wind has delved deep into the forbidden tomes & Things Man Was Not Meant To Know-- he is a changed man, & the things he has discovered have...aged him. 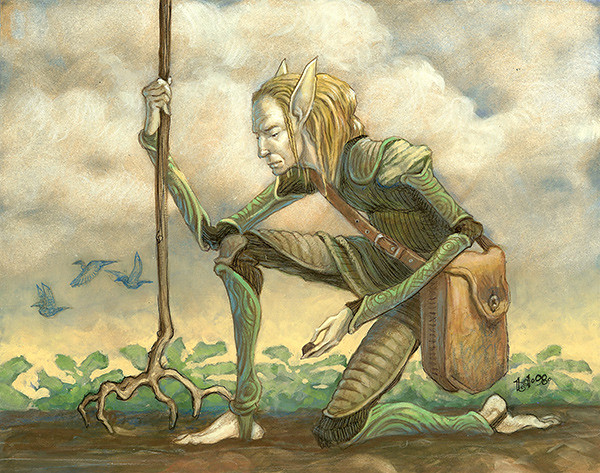 Slumbering Heart Sleeps in the Blue House has abdicated his home, his rule, & his nation-- he has gone with Miss Glass, the Bride in Black; he has Petaled, shaking off his madness of spite, & serves as her duelist. Curie First-light of the Stormstruck Tower, having been given a tower by the Licorice Duke to carry out his mad experiments, has labored at an understanding & command of the secrets of life & death. Curie has...changed, in the years since they've been gone, & the metal Gleaner suit encasing his body hides mechanical limbs, infibrated wiring...changes.They have scattered to the fringes of the Civilized World, but of course, now our narrative comes back together. Their threads begin to interweave. 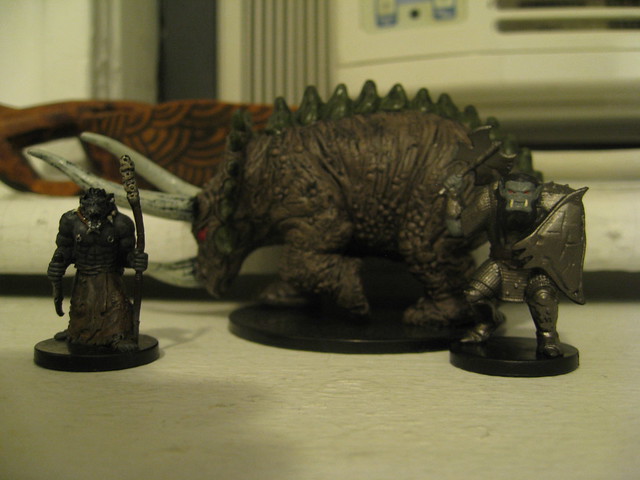 The point of conflux was The Palace Dolorosa, heart of the Marsh Mallow Duchy. Marsh Mallow, along with Saltwater (Slumberheart's Duchy) historically revolted & lost against The Licorice Duke's bid for control of Anise sixty years ago. Along the way, Blue Glory the Nightmare Lotus is challenged by Karnaks belonging to the Licorice Mob. There are two of them, with an enormous destriar, the size of some legendary wooly mammoth-- I explain afterward that these particular Karnaks have a way of pooling their dots in Mount-- & Sam wisely dubs the thing a "death Bantha." Blue Glory recognizes the mounted Karnak as Savage the Perfumed Axe, formerly a noted firebrand in fringe communities advocating a sort of anarcho-tribalism who was defeated by the Licorice Duke. In defeat, Perfumed Axe pledged his undying loyalty to the Duke, which was accepted...& then the Duke had his tongue cut out, as punishment for his calumny. No, I'm not shy about stealing from literature. Hopping Lace-- the other Karnak-- recognizes Blue Glory, but since she is incognito, he is flummoxed. He doesn't know how to handle the social niceties, but he is distracted by the arrival of Long Cleaver of Dark Mountain Wind atop his destriar, Great Thunder on the Plains. Time & trouble have put a gulf between Blue Glory & Long Cleaver-- she in her hardened vinyl armor hasn't aged much due to her Beta lineage & he in his rough-spun mountain garb, less fifty pounds & world weary-- & they do not recognize each other. In the end the Karnaks gladly let The Winter Champion (who they realize is the bastard daughter of the Licorice Duke) go on ahead of them, but they escort Long Cleaver to the Gate House under guard. 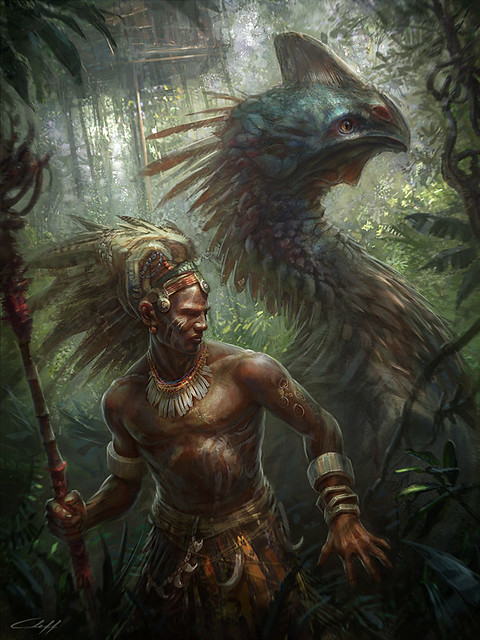 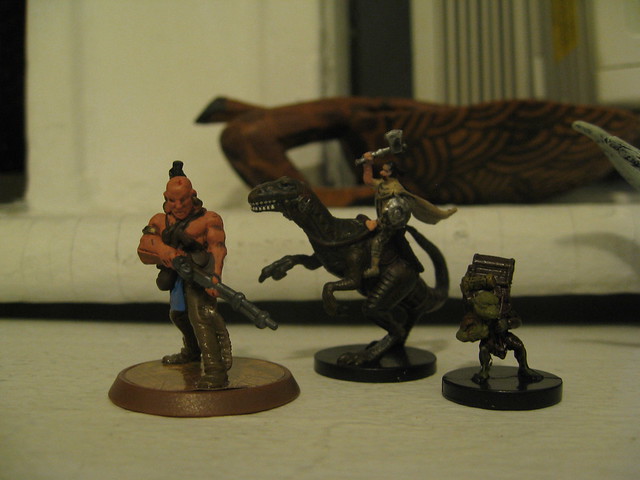 (Fool on the Hill of the See Mob, Wisefella Frog in the Coffin & cass-o-war; art by Cliff Childs.)

Curie First-light, on the other hand, made a less direct approach to the Palace, across the pampas grass in his tinker's wagon pulled by his cybernetic black & white steeds. With his senses bio-mechanically integrated with the ancient exoskeleton, he hears someone ahead of him, sneaking up on him. He approaches casually, ready for them-- when a fearsome looking dinobird comes out of the pampas grass at the side, flanking him. Clever girl! It is a human, but his dark skin & cultural markings of the Mobs...& riding on the back of the terror bird (I've wisely & ingeniously called them "cass-o-wars," thank you very much) is a tiny Demi. Luckily for Curie, he has been especially requested! Rise Up With Fists, the Duchess of Marsh Mallow, has sent to the Stormstruck Tower for the renowned Curie First-light, seeking his expertise. Fool on the Hill & the Demi Wisefella (as they introduce themselves) gladly take Curie the rest of the way along the plains at the foot of the Palace Dolorosa. 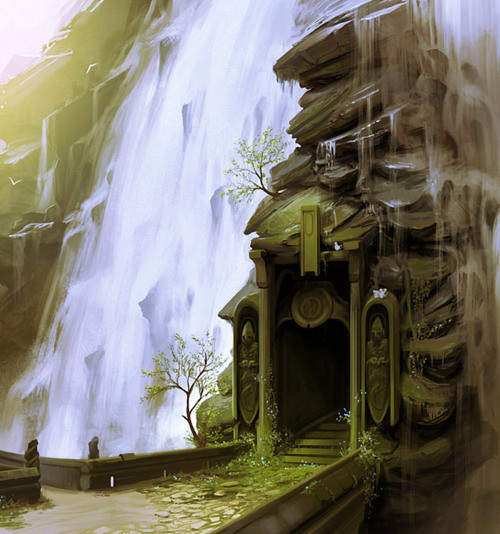 (The Gate House of the Palace Dolorosa; artist unknown.)

The living piece of fear that Blue Glory the Nightmare Lotus rides-- Herakles Nightmare-- arrives at the Gate House first, bounding ahead in a joyous run. Inside, she finds Slumbering Heart Sleeps in the Blue House, who recognizes her. She kneels & he has her rise, & they are reunited while Curie & Long Cleaver approach the Gate House with their respective guides & gaolers. They do not recognize each other-- or if Long Cleaver recognizes the man-in-metal (or metal man?) driving the cart, he says nothing. Curie is too distracted wondering if he can fit a water wheel to the waterfall to notice anything, anyhow. Inside, they see Slumberheart, unchanged but for the strange green glass armor he wears-- what is a decade to an Alpha? Seeing him, & the faces of the others, it all falls into place, & they cautiously begin to greet one & other, each hinting at the wonders & horrors they've seen or done in the last ten years. 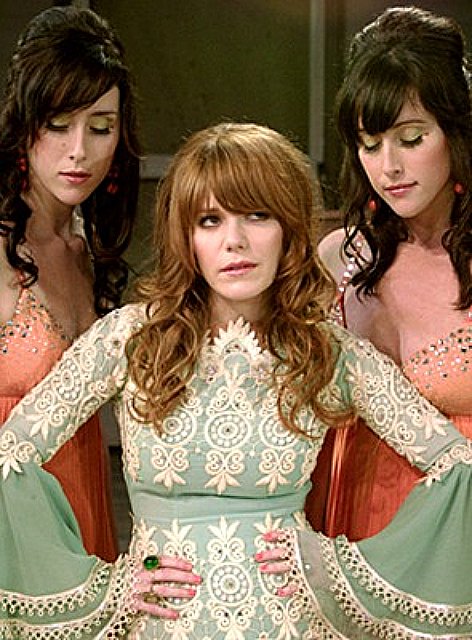 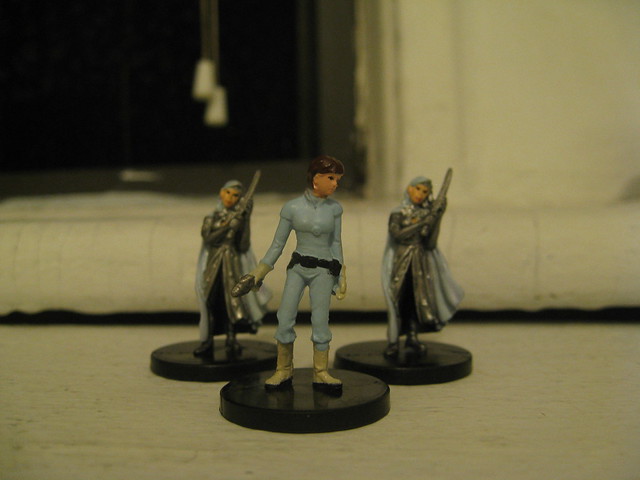 At last, Slumberheart-- who has been staying here with the Duchess for some time-- rings a perfect chime, & the Duchess Rise Up With Fists come out. The Gate House is adorned with rugs, carpets, pillows, hookahs; the Karnaks have drawn off to one side, & the Human & Demi to another. With the Duchess come her handmaid-assassins, the twins Dame Running Devil & Dame Charging Sky. Hey,

toughlad named her Rise Up With Fists; all I did was go the rest of the way & cast Jenny Lewis for the role. She welcomes the group, & accepts gifts in welcome-- a glowing, five pointed flower from the Karnaks, a bunch of flowers from Slumberheart, a silver hand mirror from Long Cleaver & a small audio recording device from Curie-- & notices Blue Glory trying to come up with a haiku, & failing, & is flattered. She bids her servants to clear the floor of the Gate House & they lead their destriars (& cart) to a large cog & wheel lift, which takes them up, up, up to the Palace Dolorosa proper. "Tomorrow is our Festival of Lights, you know," says Rise Up With Fists. 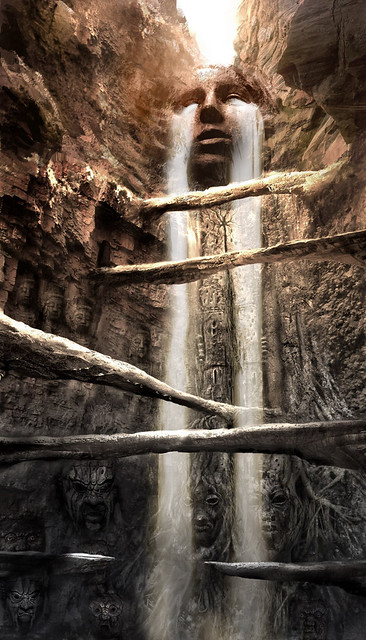 They dismount at the Palace Dolorosa, surrounded by the cold mist of the waterfalls of tears, scintillating rainbows, & vast distances below. The spars jutting across-- from room to room-- are wide, & logically should be easy to cross, but the adventurers have to suck it up & walk across them. Curie's arm is shown to be cybernetic, & it extends, like an Inspector Gadget tentacle, wrapping around the rock. Everyone else grits their teeth & does it, eventually growing used to it, & Curie eventually exerts the raw power of his will, catching up to them. They walk through the splashing water-- whoosh! Sploosh!-- & into a vast, vast cavern furnished in glass, mirrors, & tile. It is lit in the flickering green & yellow of a submarine, in the dancing lamplight of an under water grotto. The destriars are taken off to the side, housed in palatial stables, & Duchess Rise Up With Fists & her handmaid-bodyguards elegantly & politely disappear again, through one of the many secret & semi-secret passages. "I was fostered here, you know," says Slumberheart. The group retire to a variety of alcoves to clean up, dress themselves in the varied & high quality-- but not extravagant-- clothes left for them to choose from, & even Curie steps out of his power armor. Clad in a skintight jumpsuit, he cleans up & stretches before getting back in. Good thing, too, I say, since I was planning on having him make some Humanity rolls! The Duchess Marsh Mallow, Rise Up With Fists, returns, & leads them up to the roof garden for cocktails. 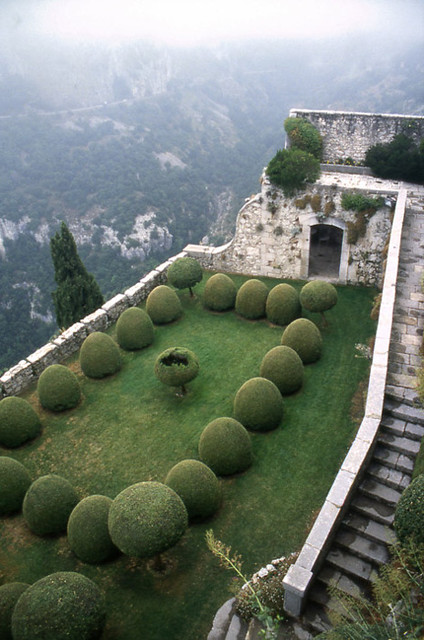 (The Rooftop Arboretum of the Palace Dolorosa; photographer unknown.)

Shots, plates of shots in every flavor & colour-- except licorice. The handmaid-knights, Charging Sky & Running Devil, start to sing, & I put in a mix-CD of Jenny Lewis's songs-- okay, now I'm definitely not being subtle. In conversation with Curie, Fool on the Hill mentions that he's looking for the missing Coyote's Lucky Day, that famous explorer, the way someone might still be looking for Amelia Earhart a decade after her disappearance. Curie recounts-- in a stilted, beat poet cadence-- all the scars, tattoos, moles & birthmarks on Coyote's body, & Fool on the Hill runs off in tears. Meanwhile, Long Cleaver is speaking to the Duchess, who happily shared treasonous innuendo with him. It isn't long before Blue Glory & Long Cleaver both realize that the Duchess intends to propose marriage to Duke Slumberheart...& that she is balanced precariously on the edge of her vices & sins-- Thorns-- & her more saintly motives-- Petals. Blue Glory talks to the Karnak from the Licorice Mob, Hopping Lace. She is interested in his goliath destriar, but he mistakes it for romantic interest. Later, after the party, he will visit her room, only to be politely rebuffed. She is too busy discussing Rise Up With Fist's intended proposal with Slumberheart. Slumberheart had-- many decades ago-- left the shattered fragments of the Pearl Queen's sword with the then-young Rise Up With Fists, & he came to have it reforged. Rise Up With Fists has been working on the blade, or having her people do so-- an acoustic savant seems to say it is a vibro-blade. Curie is here for the power source, which seems to draw its power wirelessly from...a Philosopher's Stone, one of which Slumberheart now carries, the Pearl of Infinite Price, given to him by Miss Glass, the presumed heiress of the Pearl Queen. Rise Up With Fists confides in Curie that she intends to propose to Slumberheart, & begs him to intercede with the Duke on her behalf of her suit. It leads to some nice melodrama-- the young Slumbering Heart Dwells on the Hill was betrothed to Rise Up With Fist's sister, True Love Waits, before she was killed by the Licorice Duke-- but he was in love with the Pearl Queen. Can he marry Rise Up With Fists, having loved the semi-divine Pearl Queen, & having been betrothed to her older sister? 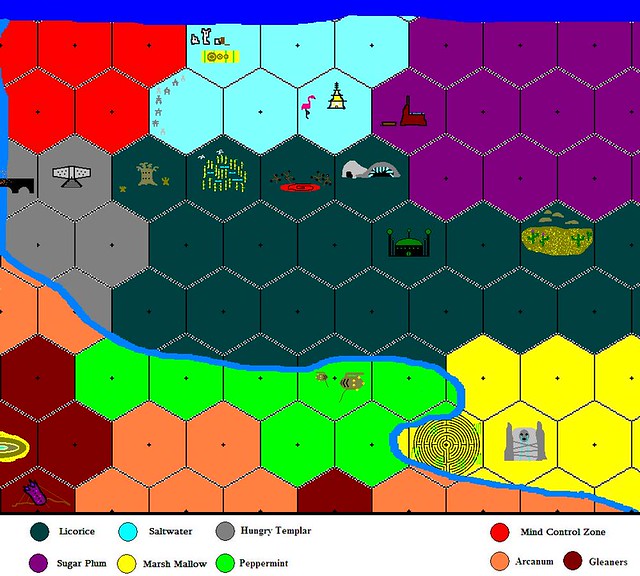