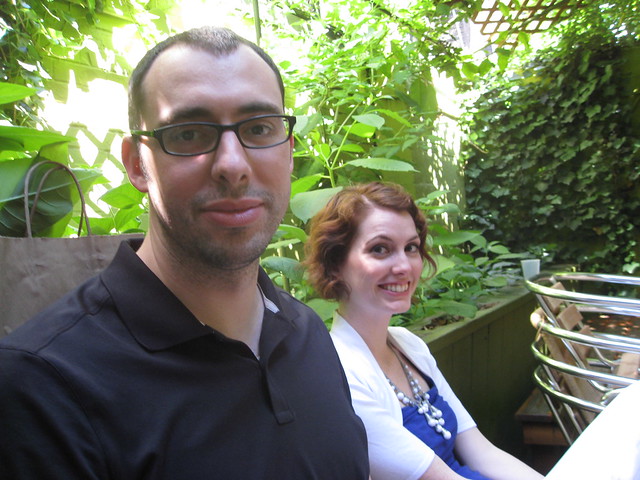 (Me & Terra at Crocodile Lounge; photo by Brian M.)

Well, yesterday I didn't achieve my goal of going to the gym-- meaning that my three times a week streak is busted, unless you average in the four times I went last week. I did end up socializing with my crew, though, so I consider it an evening firmly in the "win" column. Let me back up just a smidge. Thursday I did go to the gym; a short workout but not a bad one. Still curling the 80s so it looks like that will be my new standard. I only stuck around for an hour, but I pushed that hour fairly hard. I run this town. I rule Bartertown. I had picked up the CSA after work & while I was at the gym Jenny prepared a salad of squash & corn & cucumbers & onions & goat cheese that was pretty great. The meat I picked up from the grocery was...pretty awful. I lack the skill of understanding beef. It is all a mystery to me. I picked the worst kind. Total disaster. We watched an episode of Storage Wars, & then went to bed. No big deal. Friday was way more fun, though. Terra & Brian & Jocelyn & I walked over to Crocodile Lounge to meet up with Kat, Amber & Meredith. Crocodile is the Manhattan counterpart to Alligator Lounge, where I had my birthday a few million years ago. Free pizza with every beer! Which means, in essence, a ton of pizza & a moderate amount of beer. I took pictures, because I'm trying to be better about photo-documenting. Some of them were taken by Brian, but I'm not sure which, except obviously the one that I'm in he took. Dan came as well, but arrived after the first round of the camera & left before the second, when we left Crocodile & went to Kat's apartment. Similarly, Toy came towards the end, but missed the picture taking. Max came right in the perfect slot; he wasn't there long but did manage to land some photos. Jenny missed the beer & pizza on account of, you know, having a job without summer hours, but she didn't like her photo, so pfft, it disappeared into the aether. I don't know why, I think she looked pretty! Still, we sat with her toes on my lap, cracking up about dirty feet, pumice stones, & Phil Collins. When everyone rolled out for phase three of the party, Jenny & I parted ways & came home & watched some My Little Pony: Friendship is Magic. I'm eating the leftover burrito from dinner as we speak. 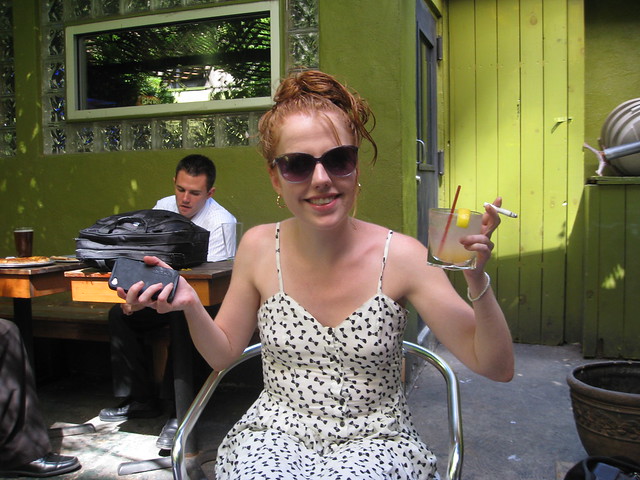 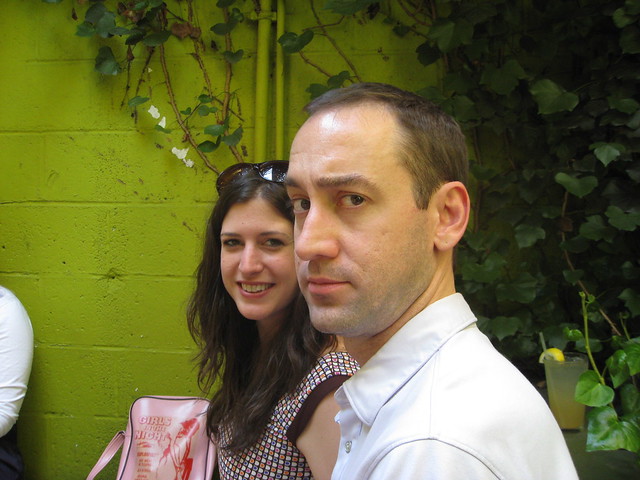 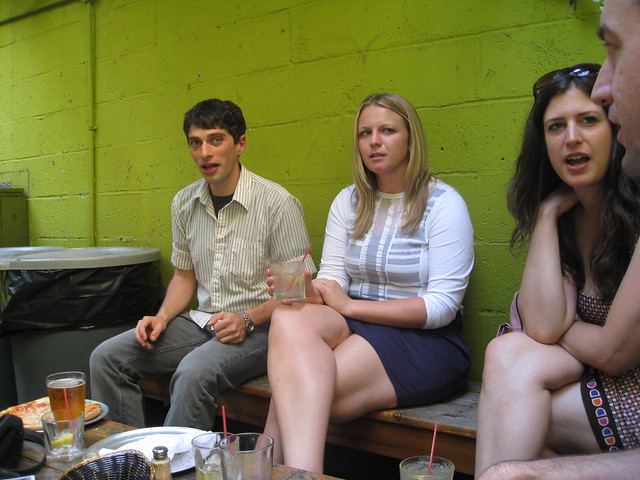 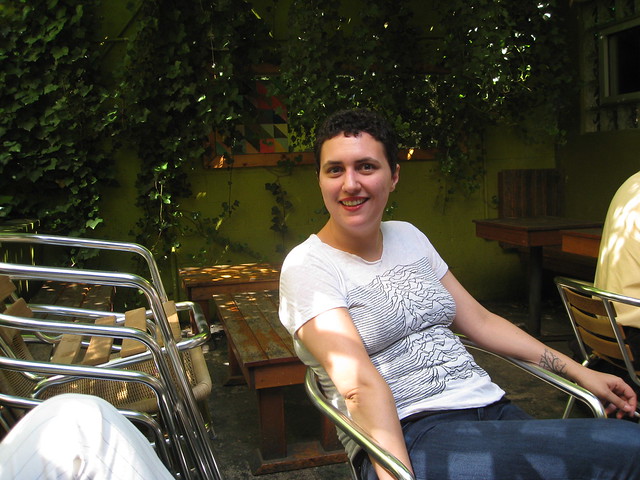 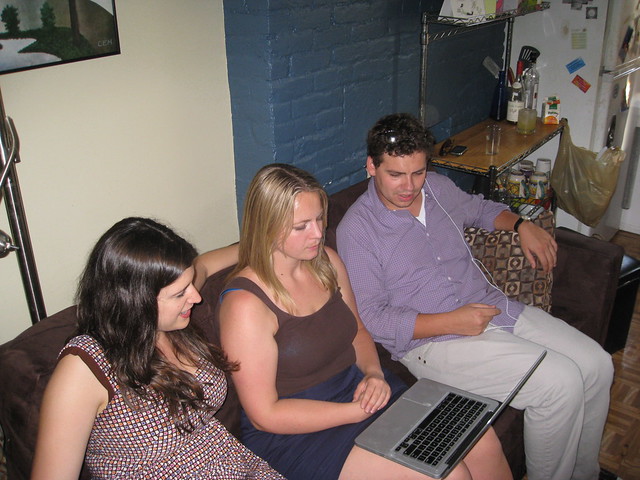 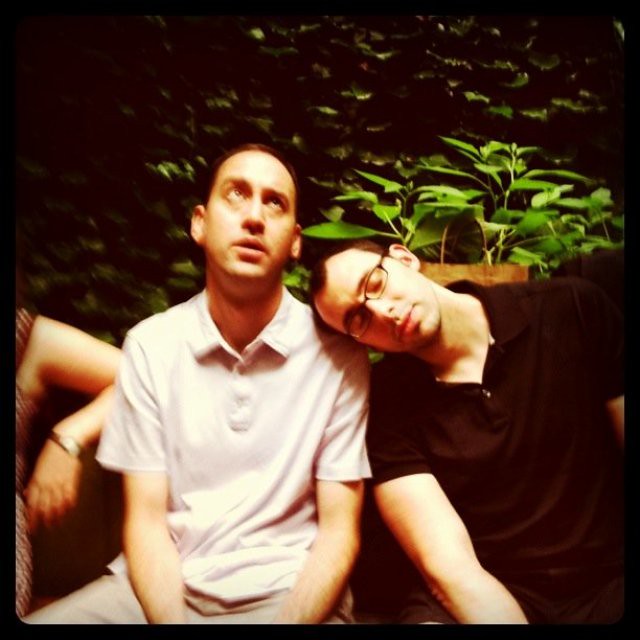 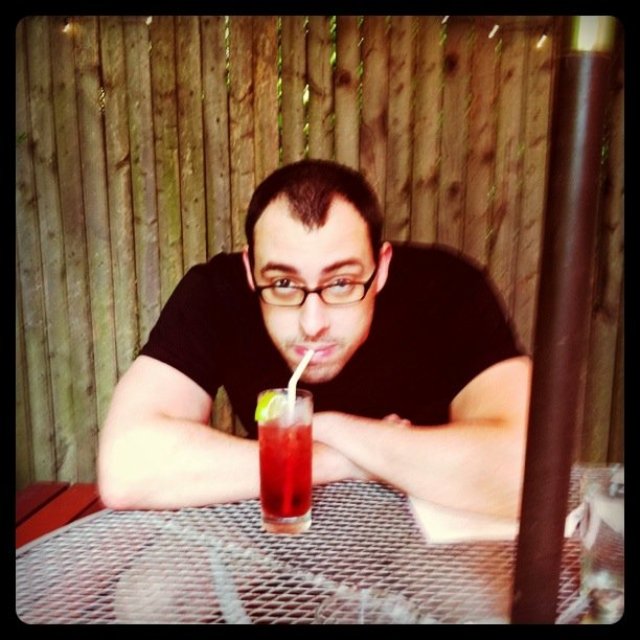 (Me & Brian yesterday & me at Perch; photos by Kathleen C.)

Today has been a pretty fun day, but I am now surprisingly tuckered out! Which I gotta shake off, since Jenny & I are doing laundry tonight, & I have to finalize some plans for tomorrow's Oubliette game. Stiff upper lip, old fellow! I'll have a beer at some point, maybe. Today was fun, though-- an uneventful morning of espresso & the exterminator-- & then I met up with Kat & we went to the gym together, for a nice fat sum of two hours. Now, doubtless some of that two hours can be accounted for in working in on each other's machines, but still, a nice chunk of time. We started with a little cardio, & then I took her to the free weights! I am a big proponent of people who don't normally use free weights picking up the skill. Not like I'm some free weight genius-- I'm certainly not. On the elliptical, Kat said something like "I only count it if I'm sweating," & that is a good mantra. If you can hold a conversation during your workout...then it isn't a workout. Part of that is just that I see lots of people using really low weights. Not "low weights," but basically...nothing. That doesn't count! If that is all you are doing, just walk around outside. Better than nothing, but it doesn't count as "at the gym." Then it was to the weight machines, which Kat wisely pointed out are called "weight machines." I just always said "machines," which doesn't distinguish them from the cardio machines. Ended up with some more cardio, then while Kat stretched I knocked out a few more reps on the free weights. Solid! Out of sight! We came back to our place, took showers, & then went to Perch for lunch. I had a tasty quiche, & when the waitress overcharged (on accident, honest mistake), at Kat's urging, I said something. Which led to a discussion on how being a big male means I have to watch my behavior. Things a smaller woman can do would be me being a bully, or starting a fight, if I did. Moderate aggression, this is civilization! I had one of their newer drinks, a Stoop Party, which is Absolut Brooklyn, ginger beer, & cranberry juice. Absolut Brooklyn is, apparently, a vodka infused with apples & ginger. It was similar to their Dark & Stormy, which I must say Perch has mastered. & now I'm home, waiting for Jenny to start the onerous task of getting clean clothes, & wondering if I should drink a beer. Oh! & I invented a new joke, to go along with the classic "Do you have your tickets? Your tickets to the gun show!" & "Do you know any good veterinarians? Because these pythons are sick!" Now to join them I have created the following: "If you were Moses, you'd be pissed! Because these calves are golden!" Not bad, right?
Collapse