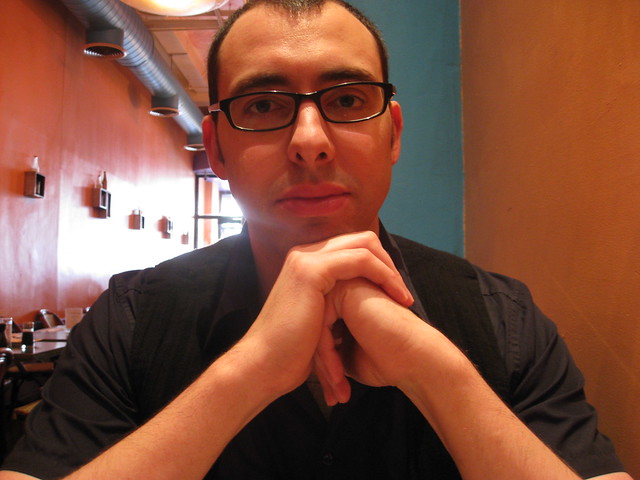 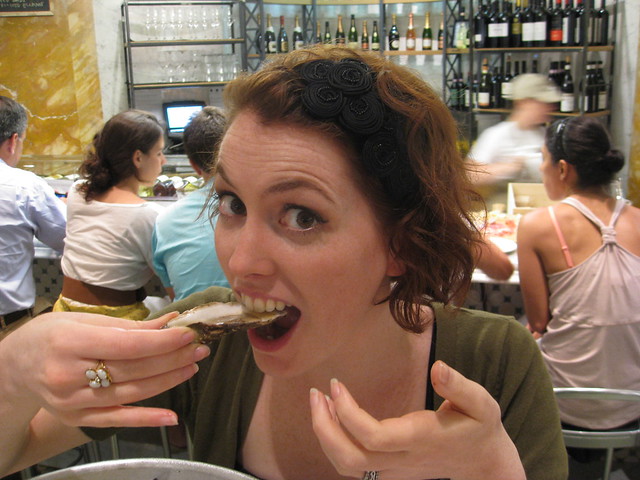 Monday during the day was me & Terra hanging out. She'd been visiting The Hole all week, so we hadn't had hang-outs in forever! We went out for sushi & sake at Azuki for lunch, & then I came back for some Work Adventures. La di da. After work Terra & I rejoined forces & went to Eataly for Blackberry Point oysters & meat plate of proscuitto di parma, proscuitto san daniele, proscuitto cotto, salami & mortadella, & with a cheese plate of ricotta, parmigano reggiano, fiore sardo (sheep), taleggio (cow) & gorgonzola. Terra put the squeeze on the lemons! It as a lovely time, until my natural enemies showed up. The herald was dressed all in white, with a cheroot, who was followed in by a bunch of...guys in suits kind of acting like jerks. You know, the sort of financial sector looking people who behave more like a stereotype of a lunchtable full of jocks in a high scool melodrama. Meanwhile, Terra & I were busy flipping through Savage Beauty & arguing over whether or not the waitress had a crush on me. Alas, she did not. After that, we went up to Time's Square. Phil has been working on a movie & I was meeting Jenny for it; Terra kept me company during the somewhat frantic search for the office the screening was in-- Jenny was late, so I waited for her & in we went. The romantic lead of the film was my favorite part, & I hope she looks good in the final cut. After that it was home, & drinks-- Magic Hat Hex-- & bed.

The next day was Tuesday, which is a whole new thing, a totally different day, can you believe it? They don't all bleed together into one ur-day. You'd think they did. Or I would anyway. Tuesday was an exciting day, because my Work Adventures finally gave me enough experience to advance to the next level-- which is to say, I got a new job! Still with the same company, but a jump in the rank & file to the next stage. I am pretty pleased about it, though it doesn't seem "real" yet-- I'm still at the same desk, doing my old job, but starting to transition to the new role. One of the big perks is that I'll be working more on the side of the company that deals with books about wizards & spaceships, so that is pretty neat. That was my big news! Lunch with Terra in the park-- a burger & fries from City Market-- where we looked at pictures. Then home to a welcoming Jenny! I had wanted to go to the gym, but I just procrastinated too long. Hey, I could always claim I was celebrating, right? I split a Samuel Smith's Imperial Stout with Jenny, the beer I drank when I first started Sword & Sworcery. She cooked us up some scrod & broccoli rabe, & we watched the True Blood episode from two weeks ago. I know, we're behind! We're trying to catch up. Like I said last episode, I continue to like King Bill, & I think Amnesia Eric is lame. The parts with Jessica & Jason were cute, though, & someone let slip-- or implied, anyway-- that Russel is back as of last Sunday! I can only hope.
Collapse