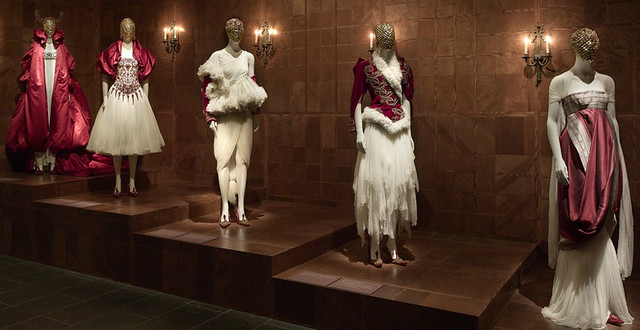 ("The Girl Who Lived in the Tree" by Alexander McQueen, on display at The Metropolitan Museum of Art.)

Last night, after Work Adventures & a slew of meetings, & ducked out of the Flatiron a little bit early & hurried to go see "Savage Beauty," the McQueen exhibit at The Metropolitan Museum of Art. Oh boy oh boy oh boy. This is the last chance to see it-- I had been meaning to get to the exhibit from day one, but things just wouldn't come together. I had to see it with Jenny-- that wasn't even up for debate-- so we both had to get our schedules in order, & it just wasn't happening. There wasn't any doubt about going-- McQueen is a huge influence on my Oubliette campaign & the reason I started paying attention to fashion in the first place. Heck, if it wasn't for McQueen's influence on Lady Gaga's fashion I probably wouldn't have ever paid attention to her. People talk about what they were doing when they found out John F. Kennedy had died; I remember what I was doing when I found out Lee McQueen had died-- I was reading a Extreme Beauty, a fashion book that Jenny (or my in-laws, via Jenny) had given me about the intersection of body & fashion, which was chock full of McQueen's work. Yes, waiting in line took forever. I wanted to get a membership-- Jenny talked me out of it, but I still think we should have. Skipping the two & a half hour line would have been worth it. That said, & speaking of "worth it," waiting in a two & a half hour line was totally worth it. The exhibit is exquisitely curated; the atmosphere reminded me a lot of Sleep No More, actually. The choice to give all the mannequins jeweled masks instead of heads was an incredibly smart decision. Seeing a lot of the pieces on display & in person totally changed my appreciation for them. Books & videos & photographs just can't do justice to some of the pieces; the feathers in one of the "Widows of Culloden" are striking in a picture but amazing up close, Savile Row taken to incredible heights. The golden scalemail from the "In Memory of Elizabeth Howe, Salem, 1692" show looks incredible in person; utterly like a suit of enchanted armor. The exhibit was crowded, but well done & deeply affecting. I really felt like I was inside a scene from my own stories; McQueen has sunk his claws so deeply into Oubliette that it just would have seemed natural for the mannequins to come alive & start talking about Watchtowers & Demiurges. If you aren't going to have an opportunity to go, I strongly recommend looking through the Selected Objects & the Videos from the Met, which will at least give you a taste of the black sugar. After we walked through, Jenny & I went up to the rooftop garden of the Metropolitan Museum of Art. I had a martini in a plastic glass, & the bartender said, while making it, "I just can't drink gin like that." You, sir, are an animal. The martini is the hallmark of civilization. 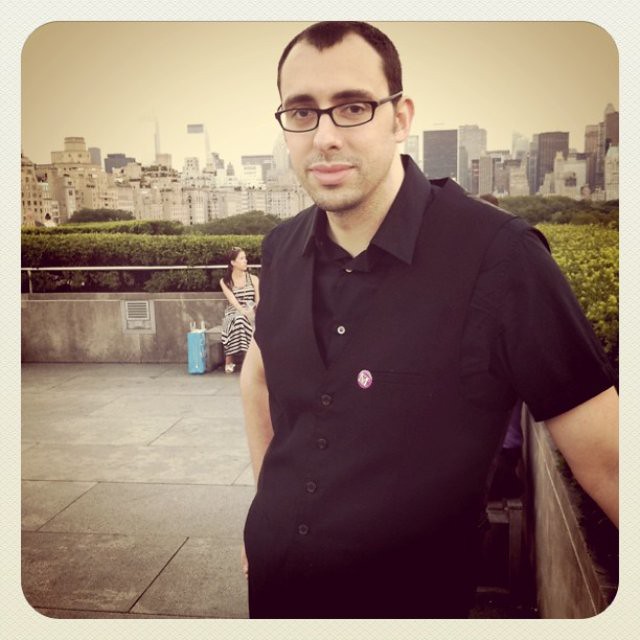 I will confess upfront; I have never played the AGE system. I hadn't even heard of it until I read about it in Kobold Quarterly. That being said, I'm really here for the flavor text, anyhow, aren't I? As I've mentioned before, I run my Oubliette campaign with the World of Darkness system, so even Pathfinder & Dungeons & Dragons are only of academic interest. AGE isn't so hard to understand; once you know the language of gaming systems, you gain the ability to grok them all, more or less. With that caveat out of the way, lets dig in! Right out of the gate, I have some major differences of opinion with Jeff Tidball's introduction-- gaming is about kicking in doors, killing monsters, & taking their stuff? Call me a New School post-modern deconstructionist if you want, but I'm clinging to my artistic pretentions of telling a story & portraying plausible characters. Not that hack-&-slash is all bad-- though it is awfully reprehensible-- but I don't consider it the heart of the roleplaying hobby. A definite organ, but not the heart. Still, this is a book about monsters, so lets get into it! Oh; actually, I've got another philosophical difference. A much more minor one. Josh Jarman discusses how the monsters are in their "base" form, & encourage Narrators to adapt them to other uses. All well & good! It just makes me appreciate Dungeons & Dragons 4e's new scheme of grouping a whole host of types of a critter in one entry, across different challenge rating. In fact, Midgard Bestiary could use some of that logic-- there are a plenty of creatures in here that end in "ghoul" that should probably be under "Ghoul, comma." Bonepowder Ghoul, page 8. Imperial Ghast, page 29. Iron Ghoul, page 30. Necrophagus Ghoul, page 39. These should all be one entry, all be next to each other. Of course, once you turn the page, I find what I most miss in Fourth edition Monster Manuals-- actual descriptive text. Tell me about how the Ala are weird living cancer that fell off an Ent! Great. The art is really great-- the sword of the Zobek Legionnaire, the four eyes of the Bemmean Wizard, the Carrion Beetle, which looks like it belongs in a Teenage Mutant Ninja Turtles: After the Bomb game, the Weaving Spider which is just like the print I have, all just very solid. Some monsters-- the Eel Hound, the Dogmole-- just seem cut from Avatar: The Last Airbender almost whole cloth. In a good way. There are monsters that just dangle, whole hooks. The Gilded Devil is a perfect addition to Hell's pantheon, halfway between Chain Devil & Succubus. The Derro Fetal Savant? A gross premie that Derro carry around in a cage? Ew, that is the best. Death Butterfly Swarm? If that doesn't exist in a Hawkmoon story, it should. Merrow? I like the idea that maybe the first proto-Troll society was aquatic, & the Merrow are the reverse-Atlantean remnents! As for the Harem Assassin-- I wish I'd read this earlier, as it would totally have fit into the previous campaign I ran. The campaign setting of Midgard is the one in which the Northlands & Zobek exist, & are a strong testament to the strength of the Open Design ideology. Consider me a fan. 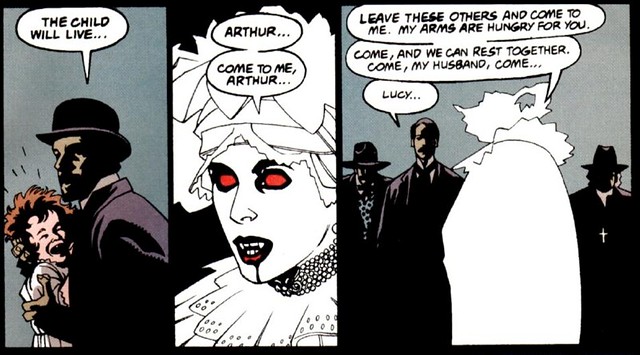 Already been a pretty full day, & now all I need to do is get my flesh in gear & hit the gym. That is the last thing on my checklist for today! Work went quickly; half day, & I had powered through a lot of catching up I needed to do yesterday. I still can't stop thinking about The McQueen exhibit, but that is a good thing. A pleasurable itch. Afterward Jenny & I came home, ate some hamburgers & poutine & watched an episode of My Little Pony: Friendship is Magic. I had asked Terra for recommendations, & she said "My Little Pony," how was I supposed to know she was joking? Besides, I'd been planning on becoming "bronie" anyhow. Today after work, JJ came over, because she had an appointment to get her hair cut pixie short. A trend I always support; always shorter! That is my haircut motto. Aubrey joined us & we sat around my apartment chatting & eating sushi. Eventually JJ went to her stylist appointment & Aubrey & I played Where I Go At Night, a two-player game where you both control the same werewolf, one as the man & one as the wolf. I won one, she won one. My super came in to paint the ceiling but the paint colours didn't match, so now he has to come back & paint the whole thing. It is a thing. After she left I looked at the artwork from Mike Mignola & Roy Thomas' Dracula & sort of goofed around the apartment. Which brings me to this very moment here. Which I am at, in the second, but you can only see from afar. & now even that moment has passed. You cannot seize a single moment until you master Time & Space, until you tame it to your will of Iron & Darkness.
Collapse