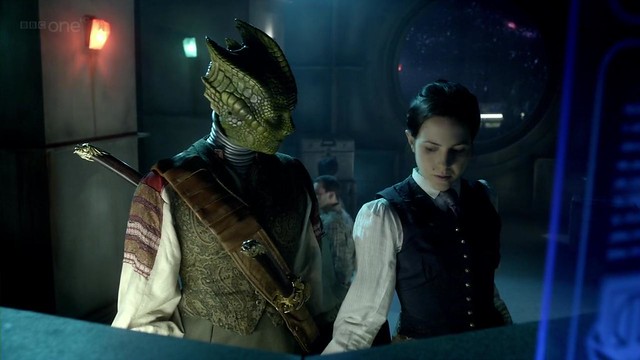 I hate it when people talk about being "busy." Yes, we're all busy, that is how it works. Twenty-four hours in a day! Forced forward a minute every sixty seconds. Still, I have been keeping occupied, even if it is just reading & working & going to the gym. Work Adventures-- always Work Adventures anymore, these days. The gym is fine; I've embraced the jump to higher weights...& have been careful about it...but I pulled something attached to my clavicle. Not at the gym, even; just sitting in a chair too long. Stupid meat. I've been treating it gingerly & it seems better. Oh clavicles; it is the only way the bones of your arm attach to the bones of the rest of your body! I don't know what I've been doing, but time has just been hard to come by. Last night was Television Night, & we are now all caught up on Doctor Who! I mean, if you don't count the Tenth Doctor, or...any of the other Doctors, really. The second episode with The Flesh-- "The Almost People"-- was, as I predicted, a "moving the character arcs along" episode, but I quite liked it. The half-season finale was "A Good Man Goes to War," & it was...schizophrenic. It couldn't quite make up its mind. For all that it was billed as a bit of "darkest hour," it didn't quite embed a sense of menace. The Doctor & Rory were adorable as bad-asses, but I didn't feel any real doubt, & the Doctor didn't really do anything terrible. Not really a complaint, though, as the whole thing was oodles of fun. Lesbian cross-species Victorian swordfighters? Yes, I'm game! I'm a sport. I'm glad I've been hooked by that program. The mystery resolves pretty much exactly as you would expect; I mean, duh, right? But I am very much excited to see the rest of the season (series? United Kingdom terminology confuses me) & how it wraps up "The Impossible Astronaut." Now then, I'm once more into the breach.
Collapse