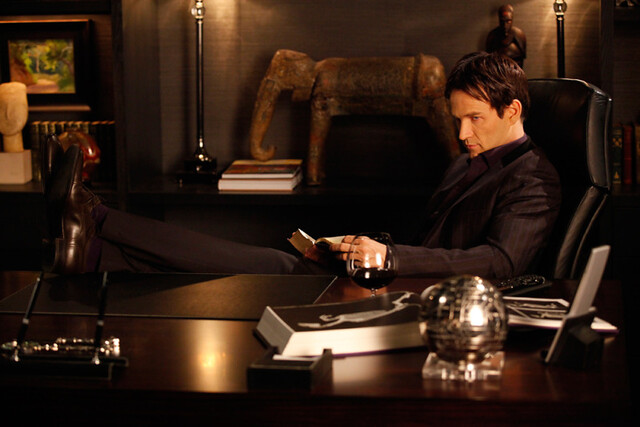 I think Vampire Bill-- King Bill, now!-- gets deeply under-rated. He's the "straight man" of the show, & because of that I think the melodramatic theatrics of people like Eric Northman get more attention, but Moyer is the real McCoy, I think. He has a hard row to hoe-- vampire with a heart!-- but he isn't quite the cliche you expect. He's no Louis, feeding off rats; he's a vampire. Just because he's an advocate of mainstreaming doesn't mean he won't feed off a human-- it just means he'll glamour them afterward, or use willing vessels. The "King Bill" arc of this season is basically the only one that interests me; everything else is so-- meh. Amnesia Eric? I've said it before-- it is too soap opera. Witches? Yawn, whatever. Werepanther rape? To...hardcore. Jessica & Hoyt? That plot has some potential, if they can subvert the expected. It doesn't hurt that Deborah Ann Woll is amazing. I hope the show renews its focus on Jessica & Bill; their relationship, & the relationship between Pam & Eric (which the show has been working well) is the only thing that True Blood does that breaks new ground, if you ask me. The creepy paternal affection of bloodsuckers. So, watching True Blood was how I ended my night last night, but I started my day off watching A. O. Scott talk about roles of the masculin archetype in cinema & eating a really great omlette from La Boulangerie Lopez. It was pepper jack, avocado & chorizo, & the chorizo tasted like-- ugh, here are my Wasteland roots showing-- Skyline Chili. Heck, while I'm retroactively talking about life, I had a dream with Esme in it, probably because googling Emily Browning showed me pictures of her with short blonde hair, & she kind of looks like Esme, like that.

The bulk of yesterday was

fordmadoxfraud's birthday celebration! I headed over to Bierkraft around two o' clock & got into the swing of the festivities immediately. I would shout out a roster of the Who's Who of the David Universe, but it is the usual suspects, & then some. Instead I'll give a run down of the beers I drank-- or at least tasted. I didn't drink all that much, but I wanted to wet my whistle with a lot of different brews. Barrier Lights Out Stout was a thich brown stout, as advertised. I actually found bottles of the Unibroue Ephemere Apple, the beer we'd adored in Vegas; it wasn't so amazing this time, which just means that it was the restaurants pairing that deserves credit. Captain Lawrence Pale Ale was a nice crisp refreshing drink, & since we were sitting outside the floral Elysium Jasmine IPA, Nebraska IPA & the Greenpoint Citrus IPA Cask were both well suited to cutting the heat. The big winner of the night was the Barrier Frau Blücher (Neigh!) which was a thick, unsubtle smoke beer. Just like I like 'em! A lot of people showed up; Kit Marlowe & Co. folks past & present & David's family, & even Kira & Nino. Olivia cried when she sat on my lap! I blame the heat, just waking up & all the distracting strangers. Or Olivia is mad at me for not coming over on Sunday-- but Olivia, I had to fight zombies! Jenny left early-- she was still fighting off a cold-- & I stuck around, but after I'd had my fill of beer & switched agressively to water. I stuck around until they closed the courtyard, & then I said my goodbyes-- well, I said goodbye to