Right off that bat, in the editorial intro by Wolfgang Baur, he asks people to send in their favorite dragon-slaying moment. Just like that, you're hooked in. Hey, remember The Termagant, the secret dualist dragon at the center of the cult that was the long-term villain in my first Oubliette campaign? I do, & now I can't stop thinking of the time my halfling ranger/rogue Chester Kegtapper went the whole fight against Nightscale, the black dragon from Forge of Fury, without a single successful attack. Worst dice rolling ever. This is the second issue of Kobold Quarterly I've dug into-- I really liked the first, #17-- & it really hits home what a loss the end of Dragon & Dungeon was. I've stopped even bothering to click on the website content at the Wizards of the Coast site. Kobold Quarterly is a worthy heir to that tradition, & if anything is a meatier alternative, since it is a quarterly. Again, this issue caters to 4e, Pathfinder/3.x, & the AGE, but there is plenty of stuff for even a World of Darkness user to find useful, illuminating & just plain fun to read. "Gifts of the Gods" I liked because-- well, I've always thought that things like Sigurd eating the dragon heart or Achilles being dipped in the Styx would be better represented by things like feat, or the Divine Gifts here. "The Savant" is a Pathfinder class in the vein of the old Factotum, & while it isn't a generic class like I'd hoped, it would be great for playing a Pretender-style PC, or the ultimate Doppelganger. I particularly like how it uses a spellbook-esque mechanic, giving the class a "serial killer" feel. Maybe that is just me.

"Silus & the Red Dogs" is next, & is possibly the best part of the whole issue. A solitary adventure, a story for one, with no Narrator, like the old Lone Wolf or Choose Your Own Adventure novels. A lot of fun, & a very welcome surprise. When I was done with it I passed it on to non-gamer Terra, so she could give it a whirl. How did I do? I tore through it like a nightmare! I was death incarnate; optimal outcome (I think) & only five points of damage taken...& a healing potion leftover. I played it straight, with one "rules call" in my favor-- if Silus does +2 damage on his first attack, & my first attack is to hurl a vial of acid (for 1 point of damage) on three people, do they each take 3 points of damage? I said yes, since if I was the Narrator that would be my call. Anyhow, yay, a lot of fun. That is followed by a bit on minotaurs as a player race, which has a nice bit of meditative labyrinth work, & mentions the minotaur's fondness for great axes...but doesn't use the word labrys, which is a missed opportunity for the sort of historical asides & archaic vocabulary end of the hobby. There are a couple of adventures, & of them "The Exorcists" is the clear winner & another stand-out article. Like We Be Goblins!, it is a first level adventure that you can spring on a group & roll with right out of the box. Equal parts a comedy of errors & a nail-biting terror-fest-- priests on the run from a possessed gold dragon use a scroll of Resurrection hoping to bring back dead saints & heroes...& instead get the jumble of crypt robbers & other essential nobodies. A fun concept & a solid one-shot, with clever touches-- like Warrior Saint Janek's Scroll-- that take it to the next level.

There is yet another Dragon Hunter prestige class-- not to my liking, as it is far too dragon specific-- & then loads of other odds & ends. Additional rules for siege engines in Fourth Edition-- hey, I think 4e works best as a tactical game, so this makes sense to me. Advice for running murder mysteries, with a helpful chart of clues that you could pick up & dump into a session. Some very clever rules on being a "Soul Broker," spoofing off modern financial shenanigans-- a fine diabolical template-- including selling short, bundled soul speculation, & the pyramid scheme. Fourth edition rules, but the ideas are great for any game with contract written in blood. I like the art for "Synergistic Magic" but it just...makes wizards...better? Seems too broken to be any use. Monte Cook muses about plausibility & the suspension of disbelief, Dave Gross lists some classic kung-fu flicks everyone should watch, & Russell Jones explains what we all knew in our hearts-- "10 Reasons Why Your Characters Should Be in Jail." Seriously, PCs are the worst kind of scourge, as China Miéville made clear in Pedido Street Station. Lair powers for dragons are nice little "concept dungeon" nuggets, kernels to build a delve around. "The Heroic Flaw" is an article in the same vein as my Character Trait notions-- it is always funny to me to realize how much I am in the context of the hobby, knowing that others are in the same continuum. We end with the book reviews-- which reminds me, I need to find a copy of Dave Gross' Master of Devils, since I liked Prince of Wolves so much. 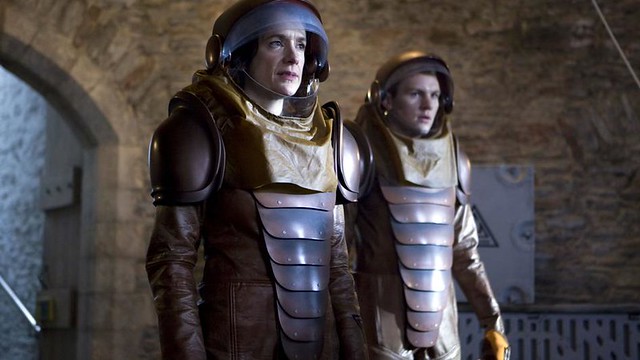 I've spent a lot of time thinking about armor & weapons in Oubliette, on more than one occasion. Right now, on the subject of armor, I'm increasingly leaning toward one end of the spectrum: Willpower. I think "you can't recover Willpower from a night's sleep when you are in armor" is a simple call, & one that basically everyone can get behind, right? I guess spring boarding from there is my notion of a Willpower Penalty. That is; when you wear armor for any useful amount of time, it costs points of Willpower. You know, you are wearing the extra weight of the chain, sweating under the leather & bronze, claustrophobic in that tin can of steel-- it takes a toll, both physical & mental. Having armor add to Defense is the simplest & most elegant solution, so why mess with it? I want there to be a trade off, though, & I think Willpower is a good one, both in terms of game balance & in terms of evoking a story. Oh sure, an "armor check penalty" mechanic is good-- it is harder to sneak around, or climb, or swim when you are encumbered by some kind of armor, but an penalty like that only goes so far. Players have a tendency to "conveniently forget it"-- which I don't mean as a condemnation of cheating, but rather that there is no incentive to keeping track of your character being screwed over. This goes back to why I like World of Darkness' Vices & Flaws, & to my thoughts on a Trait system, but lets table that discussion for now. Penalizing Willpower is noticeable & easy, while being interesting enough & making Players want to take off their armor, sometimes. Or to not have it on in the first place, for that matter. Things like penalties to skill rolls can still be a factor, & heavy armor could still decrease your natural Defense, but as a core mechanic, I think having to spend Willpower to be functional in armor is a solid idea.
Collapse