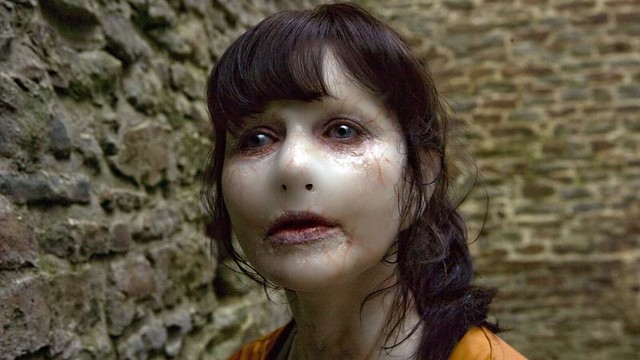 Yesterday's excitement with the gunman was a study in gossip mongering, wasn't it? I mean, I caveated everything I passed along as being part of the rumormill, but I don't know if other people stress critical distance enough for that to really absolve me of culpability. In the end analysis it seems that a elderly fellow in daisy dukes had brandished a firearm at a contractor outside his window on some scaffolding, & then barricaded himself in his apartment when the cops came. Not that big of a deal, but the whole place was on lockdown. After that excitement I got a little bit of bad news-- drat!-- & then went home to eat burritos & watch Doctor Who with Jenny,

elladorian. On the slab first was "The Doctor's Wife," & I will say without reservation-- the title totally tricked me. Like probably everyone else, I thought this would be the episode where River Song's secrets are laid bare, but no indeed! It went a whole 'nother direction. This episode was also written by Neil "Scary Trousers" Gaiman, who I like just fine, but not nearly as much as the Cult has decided to like him. Really, I think his comic book work is fantastic, & his middle grade novels are wonderful, but his adult novels are only so-so. I like his television work, though-- Neverwhere, the Babylon Five episode "Day of the Dead," all that rot. With that context, & the fact that I'd heard very good buzz about the episode, & had decently high expectations, & they were totally met. The snappy one-liners here rival the "'He's hot when he's clever' face" exchange; The Doctor & "Idris" are just so adorable. Good stuff. After that was "The Rebel Flesh," the first part of which was fairly paint by numbers...leading me to think that part two will be a little more off the wall. I really liked the acid suits; a really awesome cross of space suit with futuristic armor. I might just nab them for my next Oubliette post, actually, come to think of it. We ended the evening all hysterically cracking up at who knows what-- we're all crazy-- & then it was to bed. Slept terribly; there was a mosquito in the room & I kept waking up & swatting but not coming out of sleep enough to actually effect a permanent solution. Frustrating.
Collapse