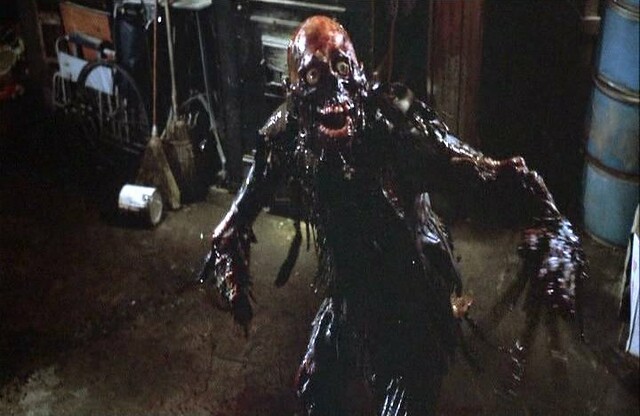 Radarless' zombie game continued! There were some doubts about the supernatural endowments of the last session, & so they were gently retconned into a dream sequence. Radarless has a strong hand with the survival horror & I think this definitely was for the best, because the second session was all the stronger for it. We took our avatar characters back to "out of the book" stats, plus one extra attribute dot-- I still say I have way better statistics than that, but okay! Act I was what I would like to title "The Waterfall of Zombies." Radarless is obsessed with zombies, & it comes out in really innovative ways; while we escaped down a fire escape, he had over-eager zombies jumping out of windows four, five stories up-- smashing to bundled of broken bones when they missed, but can you think of a more terrifying projectile than a zombie hurdling through the air at you? That was a lot of fun-- I was almost bitten, & then

toughlad & I had a devil of a time crowbaring open a security door. We ran & encountered..."the other people." You know, how in a zombie movie you meet up with the other survivors & they are a sense of internal tension & trouble? Those guys. Still, they saved our bacon, so we owed them at least a chance to not mess things up. From there, it was down into the sewers, & a horrible swarming mass of dead cockroaches & dead rats. I mean, undead cockroaches & rats, as they animated & started attacking. The "other tribe" was rudely handled by this swarm, & only one of them made it to the door before we closed it;

fordmadoxfraud & Sam both mercy killed a couple of folks who just...weren't going to make it. Then came...the water portion of the evening. Tracey is afraid of sharks. David & James are afraid of drowning, as it turns out. I'm afraid of sphinxes; maybe we'll see 'em yet. I saved David from the Tarman in a pretty heroic struggle-- you're welcome, by the way-- & came up saying "what...cough...is the name...cough...of the Conan pastiche from Red Sonja? Kalidor, by the way. It was like his epic fight with the robot dragon, or whatever. Tracy almost didn't make it, but then Sam & she figured they could jump for it-- & since David was busy being drowned, they made it safely! Then-- well, the worst part. A shoulder shrug climb through a 32" pipe...that was slowly filling with water. & the very worst part? I was last. I thought I was a goner for sure, but at the last moment! Air!
Collapse